So what’s been happening in Wicked Creek?

(Disclaimer: The author of this story is a member of Diplomatic Immunity.)

For the last few weeks, Wicked Creek has been repeatedly in the spotlight as several alliances fight over the region. With the recent implosion of N0FUX, the shifting of focus for DIP and PFR scaling back sov-related activities in the region it seems as if the conflict is near it’s end. With things finally settling down we are now able to look back and map out the conflict that has been raging since the launch of Phoebe (November the 4th).

Upon the release of Phoebe, nullsec was meant to be forever changed yet the face of nullsec did not immediately change as some had predicted it would. To defend their vast rental empire N3 decided to split their coalition up into regional blocs with Gentlemen’s. Club, Rebel Alliance of New Eden, Cult-Of-War, Caladrius Alliance, Fraternity., Deepspace., The Pestilent Legion and Novaku Alliance tasked with the duty of defending N3’s south-eastern empire from the freshly formed ‘Meow Coalition’ of The Gorgon Empire, Red Alliance, Dream Fleet and The Initiative. (and Almost Awesome. later on). N3 initially put up a good defence however when they steadily began losing ground in Scalding Pass, coupled with the implosion of Cult-Of-War and the departure of Fraternity./Caladrius alliance to the Esoteria theatre of war, GCLUB made the decision to withdraw from Scalding Pass, Insmother and critically, Wicked Creek. 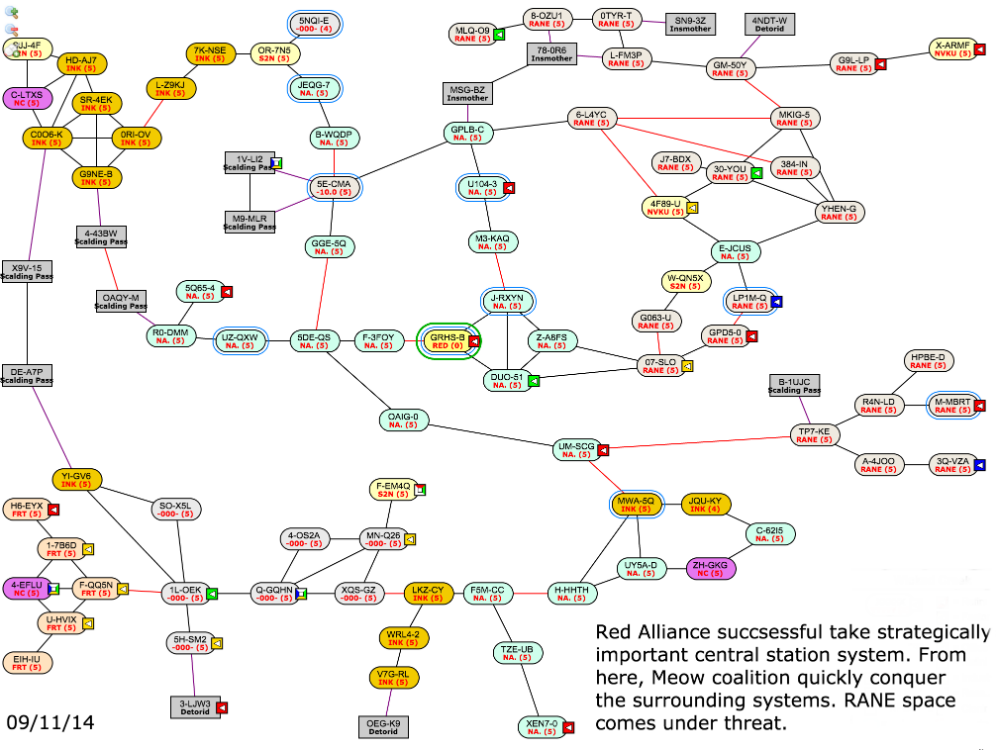 RANE had been a renter alliance of N3 up to this point however upon seeing GCLUB withdraw they got together with PEST and NVAKU and made moves to join with the Meow Coalition. Before Phoebe hit the Meow Coalition had made an agreement that split the South-East between The Gorgon Empire (Scalding Pass + Wicked Creek), Dream Fleet (Detorid) and Red Alliance (Insmother), because of this RANE had to approach Gorgon about RANE keeping their space and what happened next is a little unclear. Some reports say that RANE begun renting from Gorgon Empire at a rumoured 23b-40b per month, others say RANE paid no rent however what we do know is that RANE and Gorgon were planning on creating a rental empire together, renting out vast swathes of Wicked Creek, and were going to split the profits 50/50. This sounds like a great deal for RANE on the surface however The Gorgon Empire wouldn’t be grinding out any of the space meaning that it was up to RANE to grind out nearly an entire region to receive half the profits. To aid them in the effort of grinding out this vast amount of space, RANE enlisted the aid of 3 alliances; The Pestilient Legion, BLUE Alliance and Liberti Fidelis, Novaku chose to remain renters. 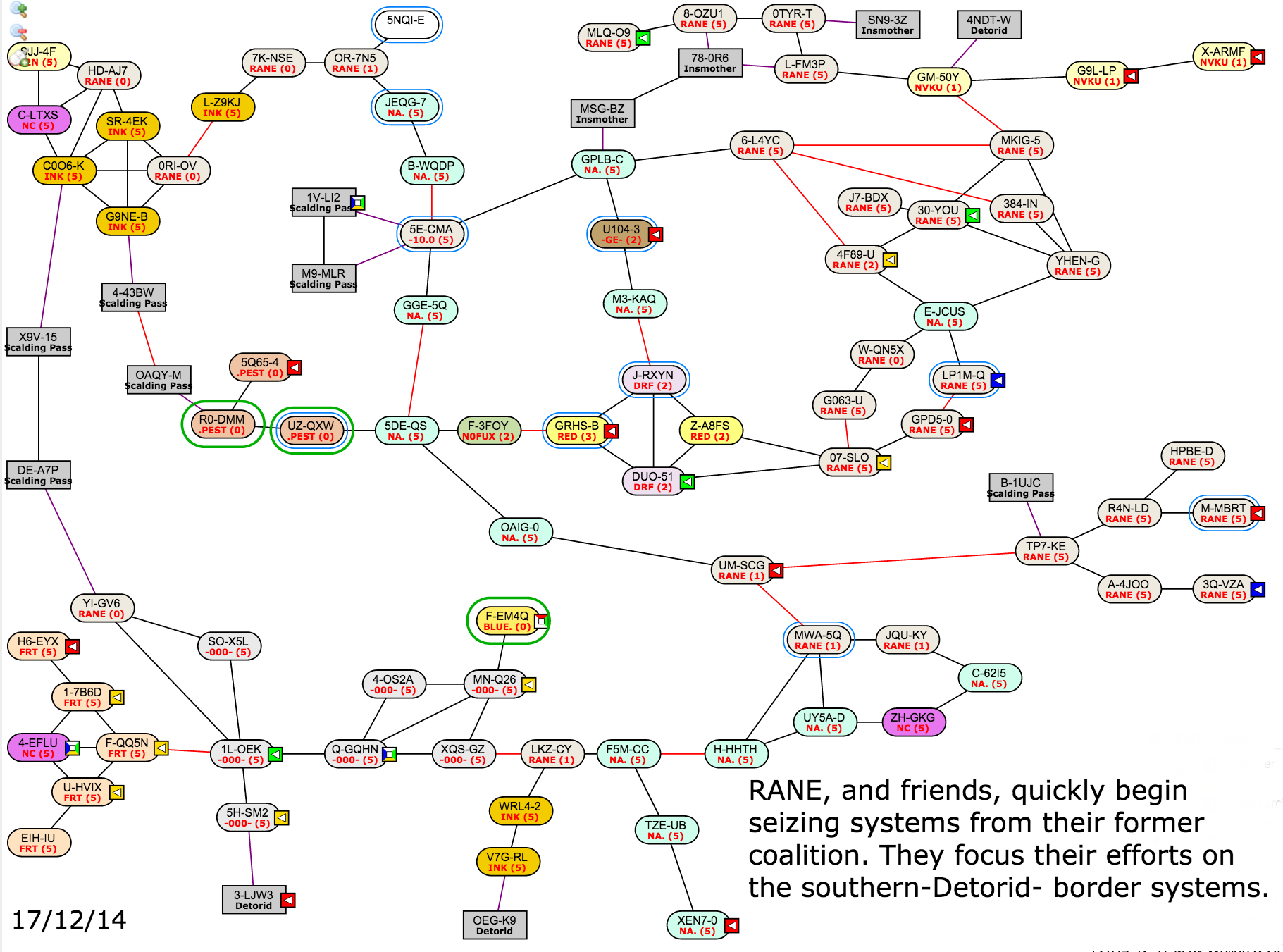 For a short period of time, the ‘RANECoalition’ was doing well, grinding out the region in relative peace and ease however GCLUB was able to stem the tide of the Russians in Southern-Detorid and so began making moves to reclaim some of Southern Wicked Creek. Deepspace. was installed into the border system (between Wicked Creek and Detorid) of 5H-SM2 and began to immediately disrupt RANECoalition operations in the area. Most notably they were able to trap and execute a sizeable RANE capital fleet. The tide of war began to change in RANE’s favour when The Gorgon Empire began reinforcing and taking stations away from GCLUB/DEEPS. It didn’t take long for Deepspace.’s home of 5H-SM2 to be reinforced which caused them to do a full evacuation to Curse. The station was saved but Deepspace. never fully returned which meant that any hope N3 once had in holding influence over the region was gone. 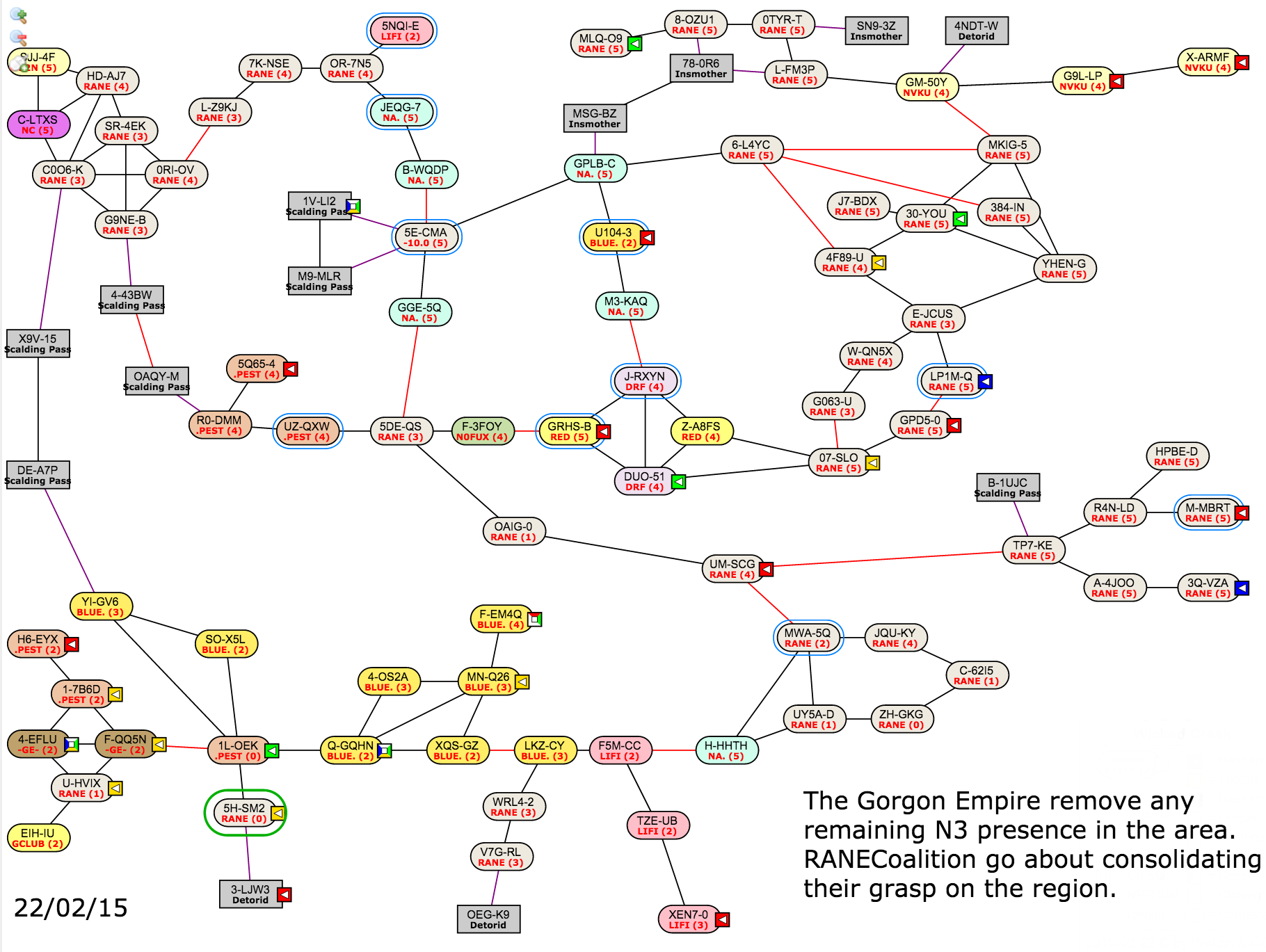 Just before N3’s presence was removed in the region, an event occurred between RANECoalition/The Gorgon Empire and Phoebe Freeport Republic that resulted in a great deal of tension between the 2 entities. The Gorgon Empire had reinforced 1L-OEK station and had planned on turning it, along with the rest of the systems in that pocket, into a renting hub however PFR wished to expand their freeport empire to 1L- believing it to be the ideal location for a freeport. When PFR made moves on the final station timer, Gorgon Empire stepped in and forced PFR down under threat of evicting them from Scalding Pass. PFR responded by seizing all Gorgon moons in PFR space and began to make moves to seize all of RANE’s moon-goo. At the same time a brutal cloaky-camping war raged between the two sides that saw dozens of billions of isk destroyed in carriers  and black ops battleships. Things came to a head between the 2 entities when PFR reinforced a Gorgon R64 in the system of M-M. PFR lost 17b in capitals during the ensuing fight which severely weakened their resolve to continue fighting RANECoalition/Gorgon. In response Gorgon Empire reinforced every PFR tower they could find and after Gorgon seized a vast majority of them the conflict began to cool down.

For a few weeks things were calm in Wicked Creek however mid way through March things began to change. Rumours were abound of Gorgon’s plans to scrap the rental empire due to the announcement of ‘FozzieSov’ and so PFR began to siege RANE systems. They targeted half a dozen station systems. However, The Gorgon Empire were able to prevent all but 1 falling. At the same time RANECoalition was attacked in the south by a recovered Deepspace. and a bored Gentlemen’s Club (they had just finished kicking INIT out of Immensea). The Gorgon Empire were again able to hold back this assault which didn’t last very long for unknown reasons. A few days after N3’s unsuccessful foray into Wicked Creek a new coalition formed up in an attempt to carve out some space for themselves. This new coalition consisted of Diplomatic Immunity., Blue Alliance, The CORVOS and Almost Awesome. and initially they were very successful, capturing nearly a dozen systems off RANE, including 2 station systems however their success was short lived as TEST soon joined the arena. 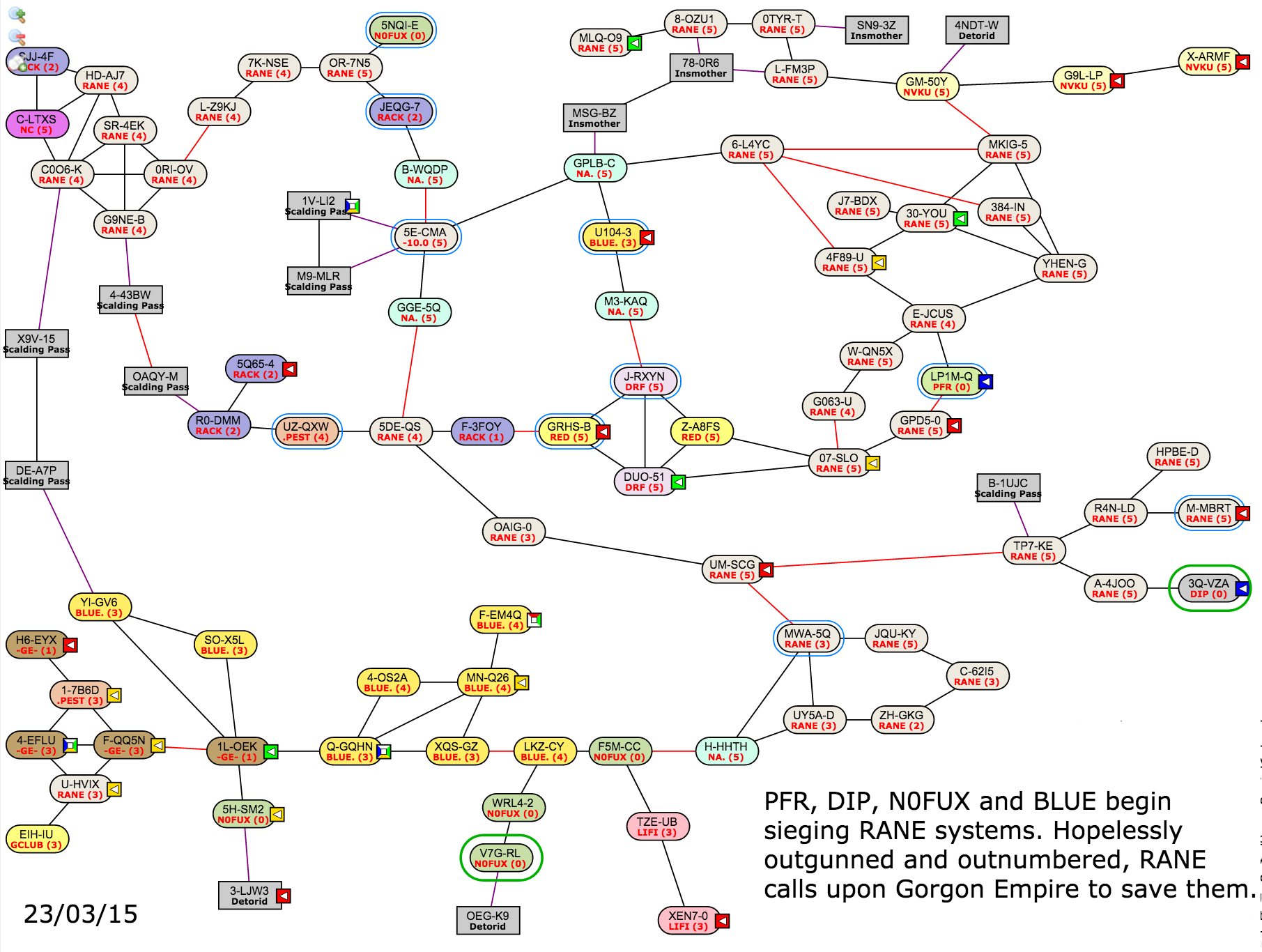 TEST’s entrance into Wicked Creek was drama filled to say the least. TEST initially blue’d everyone in order to secure a smooth transition into the area, they then had an attempted headshot against them by Black Legion. and N0FUX. Their system was ultimately saved by Pandemic Legion and Gentlemen’s Club which led to TEST returning the favour by aiding Gentlemen’s Club against DRF/RED several times over the following days. TEST then reset everyone in Wicked Creek and began to make moves to secure their constellation. It began to become apparent, to all, that TEST would be defending RANE assets/sov in the region which led many alliances to become disillusioned at a large entity coming in to ruin their beating of RANE. Red Alliance/DreamFleet, PFR, The ‘DIPFun Coalition’ and The Gorgon Empire all began making plans to setup a counter-TEST operation however N0FUX (Roweena in particular) began to alienate themselves from everyone else through Roweena’s ‘specialness’ in dealing with his allies. This resulted in TEST declaring a LGBT campaign and steamrolling through N0FUX,. DIP decided not to continue aiding N0FUX and instead joined Red Alliance in Insmother, leaving Blue Alliance alone in their sights. 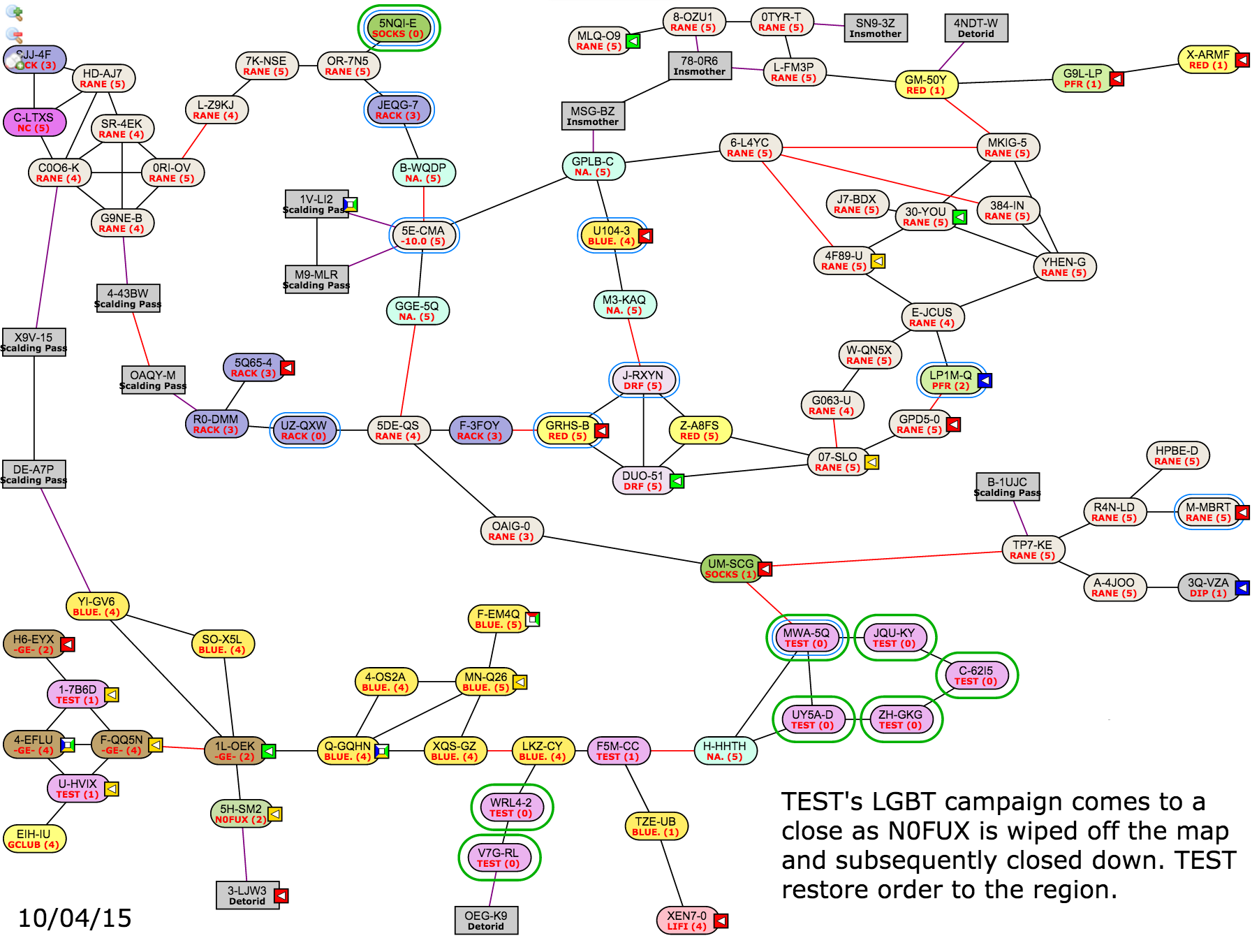 So far TEST have been easily able to suppress any attempts made at sov throughout the region such as when PFR went for M-M or when DIP went for M-M or when The Corvos went for 5Q6. The only real opposition to TEST so far has been the Russians. Gorgon Empire are fighting against TEST to defend their sov/moons in TEST’s new pocket and along with help from RED/DRF they have been very successful so far. However the relationship between the 2 Russian entities is at an all-time low and with TEST growing stronger every day, one has to wonder how long it will be until TEST turn the entire region into their sphere of influence.

Thanks to Kasken (DIP), White Don (Gorgon), Greg2010 (RED), Walter Cohen (PFR) and Sangria Ambramotte (RANE) for their help in the making of this article.