The Gorgon Empire are a Curse based Russian PvP alliance that focuses on using ‘shiny’ ships and superior tactics to overcome opponents rather than ‘blobbing’.

A couple of small gang pilots belonging to The Gorgon Empire decided to roam around their local area and ended up in the home system of Lux Aetherna (A24L-V, Insmother) where they encountered a small cruiser gang. Gorgon managed to kill an enemy Caracal however LUX were able to utilize the webs of a Rapier to kill a half a billion ISK Gila in return, bringing LUX out on top of that particular skirmish. Gorgon responded to this by sending another cruiser gang to LUX, with a couple more pilots now tagging along for the fight. However once again the web pressure of the LUX Rapier and Huginn were too much and they lost an Ishtar + Stiletto.

Gorgon decided to bring more firepower onto the grid in order to ensure that their 3rd attempt at taking down the LUX gang would fair better, so they decided to drop a Thanatos, Nyx and a Hel on the 10 man cruiser gang.

LUX lost a couple of T2 cruisers to the super-capitals, as they were not expecting such firepower from Gorgon, especially not to be dropped on what was just a small gang skirmish in cruisers. As soon as the supers dropped and the shock that Gorgon had done something so insane had worn off a bit, LUX got in touch with their friends in Red Alliance who quickly gathered up half a dozen of their own super-capitals, ready to jump on the exposed Gorgon Empire fleet. Unfortunately, by the time they had formed up it was too late, the Thanatos and Nyx had already cyno’d out of system while the Hel cloaked up and to wait out his fatigue timer.

And then fortune struck the LUX and RED fleets as, for unknown reasons, the Hel decided to de-cloak and warp to the 4CJ– gate in an attempt to ‘slowboat’ or at least cut some distance off his jump on the way back to Curse.

LUX were busy combat scanning the system in an attempt to find the Hel so were ready as soon as the Hel began to warp to gate. LUX had already sent several interdictors and heavy interdictors to either side of the gate to ensure that they would be able to tackle the super if it decided to land on the gate.

As the Hel landed and jumped though, a Broadsword bubbled up the Hel and a lit a cyno on field so the RED Alliance super-capital fleet, which had been kept on stand-by, could jump through.

The six Red Alliance supers were able to make quick work of the Hel. 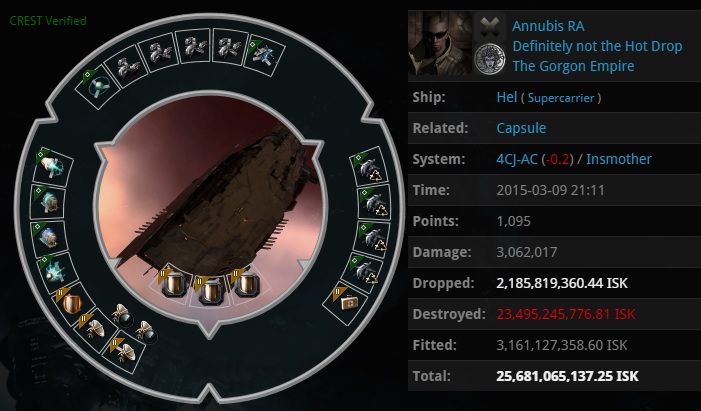 The Hel went down fighting though and managed to bring the Broadsword, who had got the initial tackle on him, down in revenge. Unfortunately for the Gorgon Empire pilot there was still a LUX Heretic Interdictor on the field so he was still bubbled and unable to cyno to safety.

The Gorgon Empire, Red Alliance and Lux Aetherna have all made it clear that the killing of this super does not in any way affect the relationship between the 3 entities and that this was all in the nature of ‘good fun’. This story is an excellent example of how the Phoebe changes have allowed small groups like The Gorgon Empire and Red Alliance to more freely use thier super-capitals without the fear of a PL/NC. superblob being on them within 10 minutes.

Thanks to White Don of Gorgon Empire, Greg2010 of Red Alliance and Arontil Gathurai of Lux Aetherna for their help in the producing of this article.