War In Delve: 2/3 of Delve under Imperium control as war cools

The Delve war for all intents and purposes has almost ground to a complete halt. Imperium cleanup crews claim towers and only 4 of the 14 conquerable constellations are left before the Imperium can claim complete control over the region. Indeed, the Imperium has also branched out and claimed two systems in the neighbouring region of Querious taking advantage of the collapse of The Querious Fight Club (aka The QFC) to gain a foothold in a second region.

Fighting has been sporadic at best and most have been small in scale averaging out at 1.5bn ISK destroyed and not exceeding more than 3bn ISK in losses. The only notable fight was a battle dubbed as the Mexican Standoff of 8WA. An Imperium capital fleet held station in the 1DQ1-A system against a Test Alliance Please Ignore [TEST] Macherial fleet supported by an Northern Coalition [NC] Cerberus fleet on the other side of the system gate in 8WA-Z6. But it appears the fight was never meant to be. While exact numbers are unknown (as no d-scan exists of the engagement,)  what is clear that the Imperium outnumbered TEST and NC together and it appears neither side was willing to jump into the other and commit to the fight. After a long stand off both sides stood down and returned home with only some TEST sabres and a couple of NC caracals having been lost.

While the fight itself was not particularly noteworthy, the drama that followed it was as it appear TEST FC Progodlegend warped his fleet command Loki into the Imperium fleet alone which was caught on this video along with claims that Progodlegend ordered the TEST fleet to safelog before attempting to make his way home. This event spawned four Reddit threads on the topic as the Imperium was keen to capitalise on the propaganda victory.

After last weeks huge gains the Imperium has again slowed its acquisition of systems in despite of the lack of any resistance gaining an additional 9 systems, as highlighted in the sovereignty map below in black circles. but curiously losing R5-MM8 to a 33 man alliance who appear to be regularly harassing Imperium sovereignty holdings in the O5K-Y6 constellation. 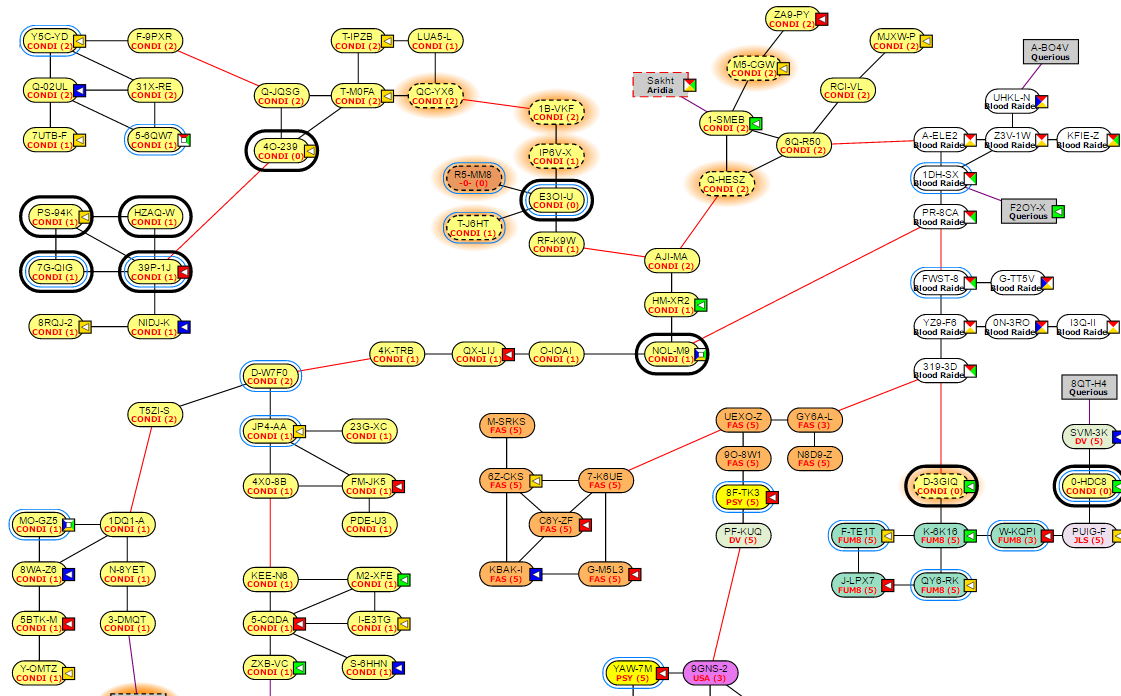 I took some time to speak to League of Unaligned Master Pilots [LUMPY] Military Director Atlan Dallocort  on his opinion of the conflict to which he replied.

The Goons choose a simple but yet smart strategy. They staged in D-W7FO and only attack systems in their jump-range. Their subcap fleets aren’t that much of a problem but they end pretty much every fight with a drop of supercaps before the real fight even starts. When thers is no super fleet commander they just don’t take the fight at all and just create a new timer 2 days later. This advancement is pretty hard to counter successfully.

Delve Core are more focused on the south and have been working Period Basis and Querious. With the fall of the Querious Fight Club there is now a power vacuum in the region, the SW Alliances are trying to fill that. The GSF can’t move their caps fast enough to disturb the fighting there so there are some good fights happen in that region.

I asked Atlan on his thoughts on the effectiveness of TEST in the area.

Its hard to judge the situation with TEST. Their deployment is seen as critical by some people and I can understand that. But giving goons ‘good’ content means their fleets won’t get smaller and that means they will not be easier to fight. At the moment they mainly hotdrop, reinforce low ADM systems. They aggravate the normal linemember and that isn’t bad. Real fights are rare because also TEST can’t do much with 200 Machariels against the Imperium supercapital fleet which includes tracking titans and their doomsdays supported by a sizeable subcap fleet.