At the end of my last article involving a Super Capital kill I mentioned that we would now be doing a weekly summary of Super Capital losses unless it involved special circumstances, such as the killing of the CFC move fleet by Black Legion. [MEN.] and friends.

Moving forward from this method of writing a brief report on each kill is detailed below for any additional kills.

[Note: assume that this article is timed with the week ending on Sunday to be written up on the following Monday.]

A Nyx piloted by Quizert of the DoomGuards [DOOMG] Corporation who are members of the ONLY FOR FUN [OFF] Alliance, is destroyed by #REKKINGRUSKI in the system of Hier, Aridia.

2 Nyxs piloted by Samarityanen and Julie Phoenix from the Project.Mayhem. [16-13] Alliance, are destroyed by Snuffed Out [B B C] in the system of Pakkonen, Lonetrek.

A Nyx piloted by Rynsztok from the Common Sense Ltd [GORGA] Corporation Nulli Secunda [S2N] Alliance, is destroyed by Pandemic Legion [-10.0] in the system of VOL-MI, Curse. 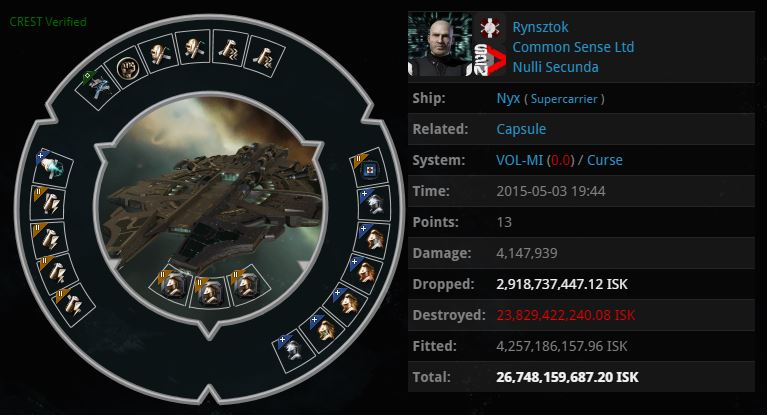 Unfortunately no information has been received relating to this loss. Just over a month prior to it’s loss it was part of the group which killed a Soviet-Union [CY-27] Wyvern in the NZG-LF system of Stain. Therefore it would have traveled 8 mid cyno jumps (not including any use of gates) to get to the location it was destroyed in and is lucky it managed to survive that long.

A Hel piloted by Kliu from Fidelas Constans [FCON] Corporation Silver Guardians [-SLVR] Alliance, is destroyed by members of the #REKKINGCREW in the system of Miyeli, Domain.

An Erebus piloted by JS Saul from the R.U.S.H [R.USH] Corporation Solar Fleet [SOLAR] Alliance, is destroyed by members of #REKKINGRUSKI in the system of Marmeha, Aridia.

A Leviathan piloted by Kapiton from the Stain Empire [SE] Corporation Xenobytes [XB] Alliance, is destroyed in the system of SKR-SP, Querious, by members of Black Legion. [MEN.], Confederation of xXPIZZAXx [PIZZA] and friends.

An Aeon piloted by Golbezz from the Disbanding As We Speak [DAWS.] Corporation, is killed by members of the #REKKINGCREW in the system of Mai, Domain.

A Nyx piloted by Lest from an NPC Corporation, previously from ANZAC ALLIANCE [ANZA] Corporation in Fidelas Constans [FCON] Alliance, is destroyed by members of the #REKKINGCREW in the system of Bairshir, Derelik. 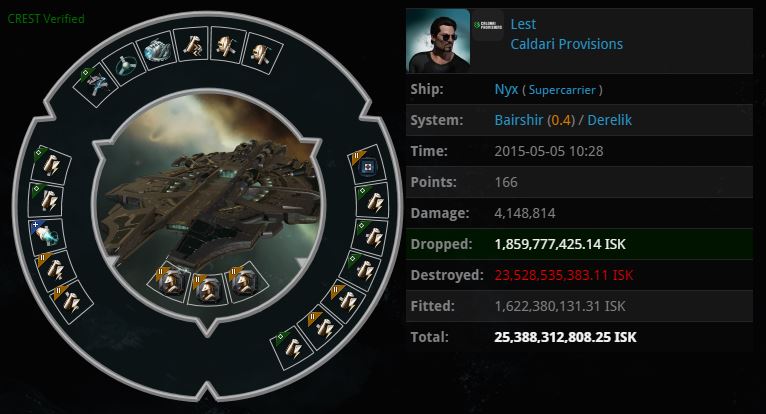 RoCkEt X provided me with the following information:

The super was first spotted in Camal where a rekkingcrew member was running a lvl 5 mission at the time. The guy literally cyno’d in and warped to a POS. The POS belonged to a Shadow Cartel [SHDWC] alt corp. The majority of Shadow Cartel supers aren’t in the alliance itself, but rather the pilots have their own corps/towers etc. They followed his alt and he went to Bairshir, and was found sitting 200km off of another POS by the same corp. The few #REKKINGCREW members that were online at the time sent a HIC over and warped to the cyno when he lit it, tackling the Nyx and pretty much volleying it with a few doomsdays.

Unfortunately I have had no response from the pilot in question so am unable to provide an alternative version of events.

A Nyx piloted by Captain Trololol from High Flyers [HIFI] Corporation The Kadeshi [THOR] Alliance, is destroyed by a group of pilots from No Value [-X3-] and [PIZZA] in the system of C6Y-ZF, Delve. 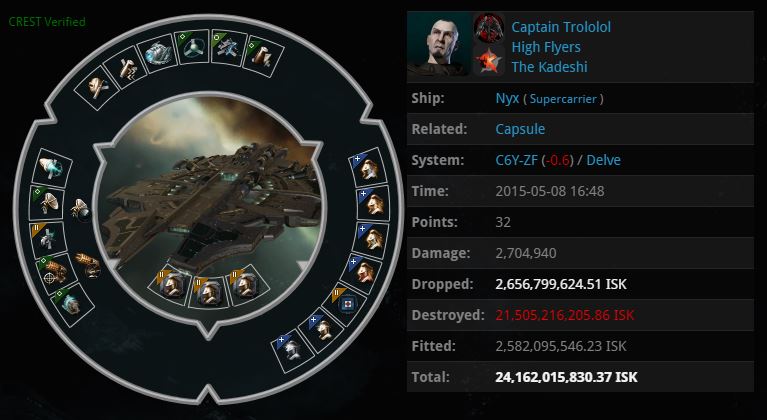 Not much is known about this kill as neither side have responded to requests for information. However, as [THOR] lost sovereignty of the system on the 1st May, only a week prior to the super loss, it is likely that it was caught attempting to leave the system for safer pastures.

Update: According to a comment on this post the pilot was in fact trying to put the station in C6Y into it’s armor timer when it was caught.

A Nyx piloted by Achilles69, who was a pilot from Liga Freier Terraner [LFT] Corporation Northern Coalition. [NC] Alliance prior to it’s loss, is destroyed by the #REKKINGRUSKI group led by low sec Russian alliance LowSechnaya Sholupen [-LSH-] in the Shirshocin system of Aridia. 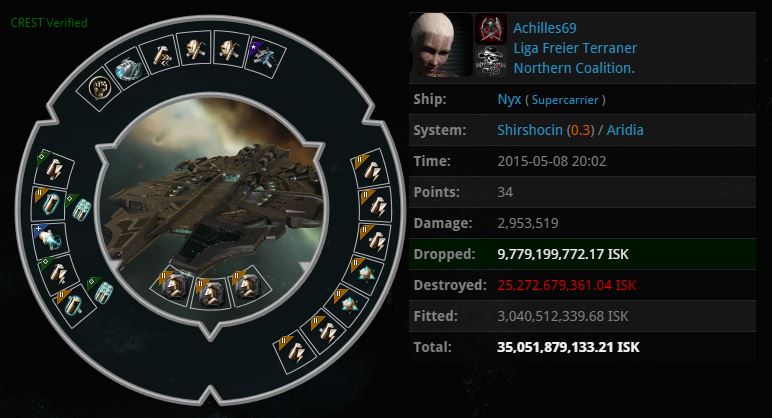 I received a brief statement from the CEO of [LFT], Servanda.

I can’t realy tell you what happend as the pilot loged off after the Nyx died and did not log in since. Likely the reason is that he moved his super at an stupid time and didn’t take the necessary measures, besides being told not to move alone. The Nyx alt quit corp on his own even before anyone was aware what had happened.

3Better from [-LSH-] replied with the following:

This was very simple. Around 19:20 Eve Time qwen zu said in fleet that there is [NC] dude hanging in hier for a while (Achilles69). I also noticed his corpmate in Yehaba, who soon went out to shirshocin and stayed there. The Killboards showed Achilles is a Nyx pilot. I shouted in comms about the whole situation and told guys to set up a trap for the nyx and logged out to go sleep. Rad1st now was in charge of catching that thing. When I woke up in the morning I was hoping to see the dead nyx on the kb, which I fortunately did. The guys told me that everything went just as planned, aside from the part when Rad1st was distracted by some girl at his work, who was trying to have a chat or something 😛 so he even missed the moment when the Nyx jumped out of hier. Luckily, he managed to get rid of his co-worker very quickly and came back to the game. The rest is written in the majority of the articles about the supers which were sought and killed by LSH.

I have had no response from the individual pilot involved.

An Erebus piloted by Meequals ChucksALT from the Mostly Sober [FU84R] Corporation The Bastard Cartel [TBC] Alliance, is destroyed by Shadow Cartel [SHDWC] in the system of Ostingele, Placid. 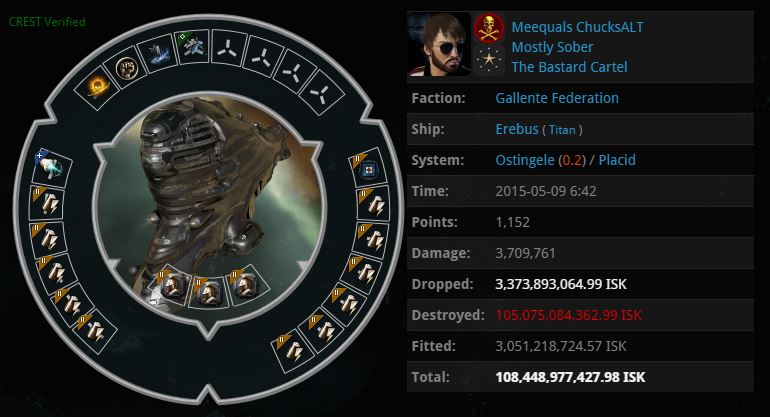 I was told by [FU84R] CEO MrChuckNorris that the “Long story short is [SHDWC] watchlisted our titan pilot and just camped him until he was caught. It was on station due to poor intel from the cyno toon. However its intent was not to move ships out of it on station. Ships were only taken out of the cargo once it was destroyed.” This is similar to that of the report by W0wbagger, alliance leader of [SHDWC], “I was asleep, but as far as I know he cyno’ed to a station and whoever got him had been keeping an eye on him.”

Whilst not extremely detailed, one thing of note is that it was apparently a titan funded by the alliance, shown in this image.

A total of 2 Erebus, 2 Nyxs, 1 Aeon and 1 Wyvern belonging to the CFC Alliances Goonswarm Federation [CONDI] and The Bastion [BASTN] were killed in the Fountain system of KVN-36 by members of Black Legion. [MEN.] and friends whilst attempting a move fleet with minimal support.

Finally the last super killed this week is a Wyvern piloted by Iron John of the Unallocated Skill Points [UNSP.] Corporation, destroyed in the system of Camal, Derelik, by members of the [-10.0] led #REKKINGCREW. 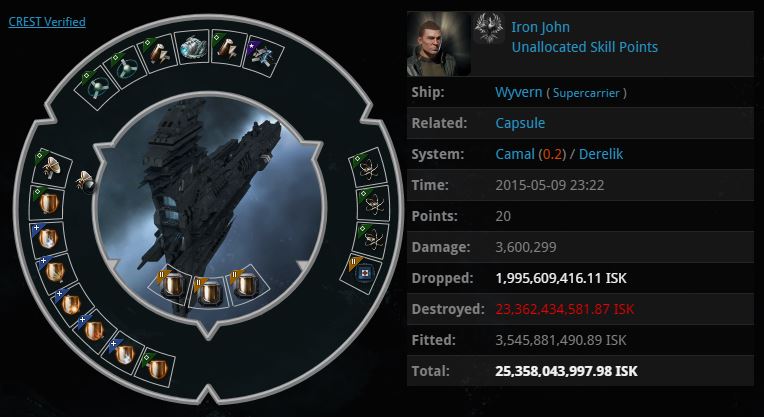 RoCkEt X provided me with the following information:

A few days back there were 2 chars in Camal in the same corp; one docked, and one in space. One character undocked in a pod and warped off to a deep safespot towards planet 8 direction from the station. Shortly after, the other character landed on the station out of warp coming from the same direction.

We figured they’d just swapped out of a ship, but didn’t know what. A little research showed it was a Wyvern that had been inactive since 2011. This means his cargo would be overloaded due to the drones being put into his cargo following the fighter bomber volume change – so he wouldn’t be able to warp. When the character now flying the ship eventually logged out, we probed his spot… and then sent a HIC over there to wait for him when he logged in.

When he did eventually log in, he got tackled and pretty much volleyed by the titans the crew sent in to finish the job. During the kill, myself and several other members of #REKKINGCREW were busy getting drunk at EVE London – fortunately, the guys back home were ever vigilant and managed to pull off another execution style drop.

As proven by this killboard it shows that the pilot last engaged in PVP back on the 26th February in Providence when the pilot was a member of the [NC] Corporation Ever Flow [EVF].

At the time of writing no response has been received from the pilot in question. As noted by RoCkEt X the loss shows additional fighter bombers in the cargohold which should not be able to have that capacity, therefore proving the return of such an old pilot.

The above shows some similarities between the losses with the majority of them simply being down to the experience of the hunters catching those unaware. With the increase of general wealth across New Eden the amount of pilots able to acquire such ships has gone up drastically, leading to a large swathe of pilots being inexperienced in their correct use and safe transport methods. After reaching a total of approximately 970.2 Billion ISK lost, 0.97 Trillion ISK, it will be interesting to compare the tally with what is to come over the course of the next week.