The last outpost to be anchored in New Eden

With the launch of the YC118.10 patch we start the process of saying goodbye to perhaps the most familiar site in nullsec – player built outposts. The torch held by these structures for over ten years now as the homes of nullsec inhabitants will pass over to the new Citadels that have been steadily populating all over the map. Part of the roadmap originally laid out by CCP Seagull back in 2014.

Many veteran players will utter the words ‘I lived in that system’ or ‘I helped build that outpost’, but where did they all start? For that I delved into the old CCP dev blogs and found one by CCP Oveur. Which you can find here. In it he says:

First, lets look at what Outposts really are. They are just like real stations where you can dock and you have a huge hangar. The main difference between a station and Outposts lie in the types and the number of services available. Outposts are smaller versions of stations, so they will have fewer slots and the type of Outpost, and in this case Race, determines what services are available.

To sum it up, we think this will bring direct benefits to Alliances, change the focus of unclaimed 0.0 space, lead to the creation of more Alliances, create more direct and focused strategic goals both to defend and attack between Alliances, create new goals within Alliances and last but by far not the least create goals for new corporations to aspire too.

Remember, when we enable players to build infrastructure which they make money on from other players, this won’t only benefit the Alliances, this benefits the whole universe. Ultimately, you will be able to work for the new empires or work against them. Heck, you can build your own! It should be up to you, not us.

When originally released Outpost Construction Platforms were manufactured using Outpost components, which were only sold on the NPC market and could not be manufactured. The components are also huge and transporting the required amount for an Outpost was a daunting task. What is even more interesting is that these stations were released a whole two and a half years before Jump Freighters were introduced.

This would have meant that just getting the components together and moving them from one place to another was a particularly tricky logistical problem. On top of that, in comparison to modern day Citadels which is essentially land > launch > anchor the set up process was somewhat more complicated.

Outpost Construction Platforms were deployed into space like anchorable secure cans but can only be deployed by a Freighter because of the size of it once complete. After the Platform has been deployed it needed to be filled with set amount of minerals and commodities. The minerals can be mined through ore and refined in station closer to the Outpost location but the commodities needed hauling.

Once the Platform has been filled with all the required items, it will get turned into a ready-to-use Outpost after server down time. And all of this at a time of pre-dominion sovereignty which required the alliance deploying it have a starbase / pos on over 50% of all the moons in any one system.

Deploying an outpost was quite the undertaking! But even so Ascendant Frontier was the first alliance to deploy a player made outpost: A Minmatar Refinery Outpost, deployed in 5P-AIP solar system in Feythabolis on the 20th of August 2005, just two months after the release of Exodus: Cold War. It was named “Prometheus Station” in honour of the main contributor and organiser to the effort, Prometheus Wrong. Ascendant Frontier also allowed the EVE community to satisfy its curiosity, (and to probably show off a bit), by rescinding their Not-Blue-Shoot-It (NBSI) so that neutral parties could fly to 5p and take a look at the new outpost.

CCP celebrated this event by adding a Press pass to Prometheus Station opening item in the Second Decade Collector’s Edition as explained in their 2013 devblog here.

In those ten years that outposts have been a part of the EVE universe they played a vital role in the organisation and structure of many space empires. After all who remembers the hell camp of 0-W778 by the CFC not long before the fall of the N3? And who can forget the never ending ‘VFK by May’ meme. But these are stories for another article.

But these indestructible structures posted an interesting dilema: what to do once these structures were everywhere? An overhaul was due and this was addressed during the new sovereignty changes announced back at the beginning of 2015 which was shortly expanded on by CCP Ytterbium and team Game of Drones in his blog Back Into The Structure.

CCP set themselves a wide variety of goals to achieve which ultimately resulted in the new Citadels and Engineering Complexes, the start of which can be seen in the follow up blogs

And finally almost two years after the original announcement the next range of structures, named engineering complexes, have been introduced and the final major role that outposts played has now been filled, marking the end of new player-built Outposts in New Eden. 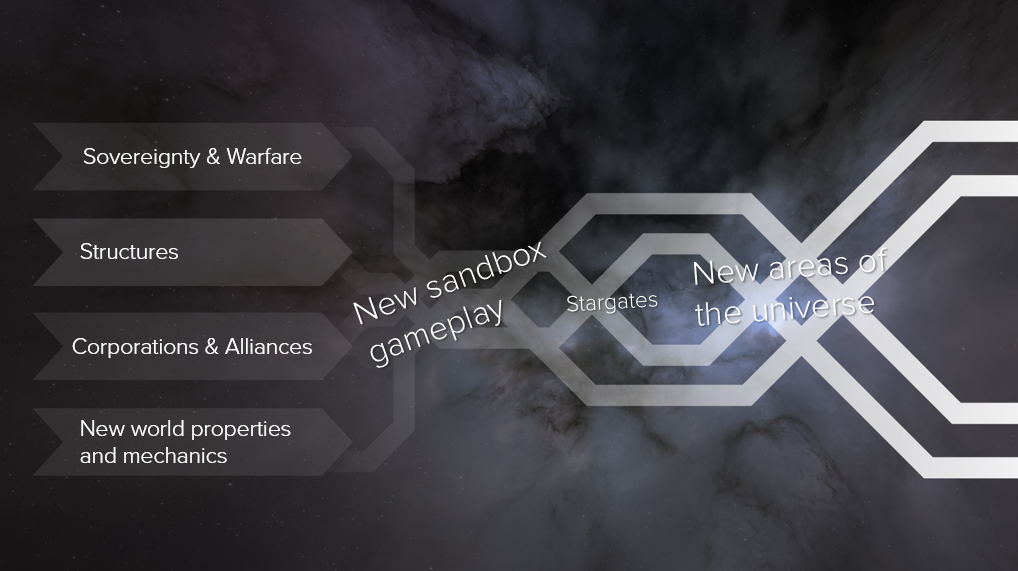 The EVE Online Development Roadmap as of 2015

But there was one last chance for an alliance to put down what would be the last player-constructed outpost in New Eden, and it was completed by the Fraternity. alliance. On a reddit post by alphaempire explains the process they went through to anchor it and some of the issues they faced.

The last of its kind, it is based on tried and proven architecture of old.

The Amarr Factory Outpost was built by an allied corp called eXtreme Co who meant to anchor it in the JMH-PT solar system; however, due to deployments up north, they have opted to sell to Fraternity. who wanted to anchor their own station near their home base of Curse.

If the logistical nightmare of getting the fuel to online the egg from empire to Curse wasn’t enough, Fraternity. leadership also had to make sure they anchor it right before down time with a full defense fleet and do it with complete secrecy or billions of isk worth of fuel and the cost of the station egg would go down the drain.

The ping to form started around 9:00, and by 9:19, Fraternity FCs started contacting the SLYCE manufacturers due to an error. The freighter pilots started alerting leadership that they were getting errors attempting to anchor it: “09:19:13 Notify You cannot start building using the construction platform there as there is no planet nearby and this model is designed for use in the orbit of a planet.” With quick adjustments and down time fast approaching, they managed to correct the problem and started fueling the egg.

If all was done accordingly to plan, a new station would be born after downtime…the last of its kind.

And so from Ascendant Frontier in 2005 beginning the placing the first outpost throughout the known universe until the 1335th and final anchored by Fraternity in 2016, the era of the Outpost is coming to an end, ushering in the age of the Citadels.

Reference
‘The history of Ascendant Frontier‘ on eve-history.net