NC. deploys towards Tribute and begin hostilities against CO2

The North has been somewhat quiet since the end of World War Bee and many of the residents have been enjoying the spoils of victory. Fortress Keepstars have been anchored by alliances such as Darkness., Circle-of-Two, Pandemic Horde and Northern Coalition.

Despite this there have been a few occasions of drama in the region possibly indicating that, maybe, behind the scenes the bonds of the Money Badger Coalition have started to dissolve. Events included Mordus Angels declaring war on Northern Coalition. after a spat with one of their fleet commanders only to retract it a day or two later after some diplomatic negotiation. Short Bus Syndicate dramatically leaving the Guardians of the Galaxy coalition after a public disagreement with the coalition leader Sort Dragon.

However the most spectacular example of growing tensions was the recent battle in SH1-6P when CO2 with Test Alliance Please Ignore attempted to defend against a combined Pandemic Legion and Northern Coalition fleet resulting in a 1,400bn ISK battle.

Northern Coalition is notoriously for never staying put in one region for too long. In addition to this the alliance can boast as being the 9th largest and its leaders command one of the largest super-capital fleets in the universe. It was only a matter of time before the alliance went on the move again to hail the end of their traditional summer break and announce the start of the alliances winter campaign. There was vast speculation among pundits about where that deployment might eventually take them. Would they deploy to Delve to fight the old enemy the Imperium? Would they move closer to Lonetrek to put them in escalation range of Snuff Box and Project Mayhem who they have clashed with frequently in the last few weeks? Would they go to Providence?

Early evening the Northern Coalition fleet un-docked from its Keepstar in 93PI-4 over 700 capital ships including 112 Titans, 150 super carriers and 228 Force Auxiliary ships.

As it turned out, Northern Coalition travelled only two capital ship jumps from their summer staging in 93PI-4 to KQK1-2 which put them on the front doorstep of Tribute and space that belongs to ex-Imperium alliance Circle of Two, The Omega Security Syndicate, Mercenary Coalition and Shadow Cartel. This video by Youtube user Natuli caught the moment as the fleet landed in KQK1-2.

Only a few hours after the move by Northern Coalition was completed an eve-mail was sent out to Pandemic Horde with a link to a forum post which was purportedly leaked onto reddit as the following:

We are going to war.

The first targets are the systems UMI and AW1. Timer for UMI is already coming up on Tuesday.https://timerboard.net/tribute

CO2 have been good allies during WWB and made a massive difference in the war against goons. Afterwards they became good neighbors regularly bringing fights to 7rm (ruptures, ONIs ecc…) and to lowsec. There is no component of hate for CO2 in this campaign, they are a good alliance full of great guys. The goal of this war is to secure a better access to empire and superior space while fighting together with NC and PL. It is my belief that CO2 will eventually lose this war whether Horde joins in or not, and then I would rather be the ones holding Tribute than letting test or a new alliance grab this key area.

What about the other alliances in Tribute like MC, OSS, SC?

For now leave those alone and do not entosis them. Focus on CO2 first. Also keep in mind that Horde’s final interest in Tribute is only those two constellations circled above, although during the invasion itself the Sov can be held by anybody.

Earlier this evening Circle of Two Leadership held an emergency meeting of which the contents of are currently unconfirmed. 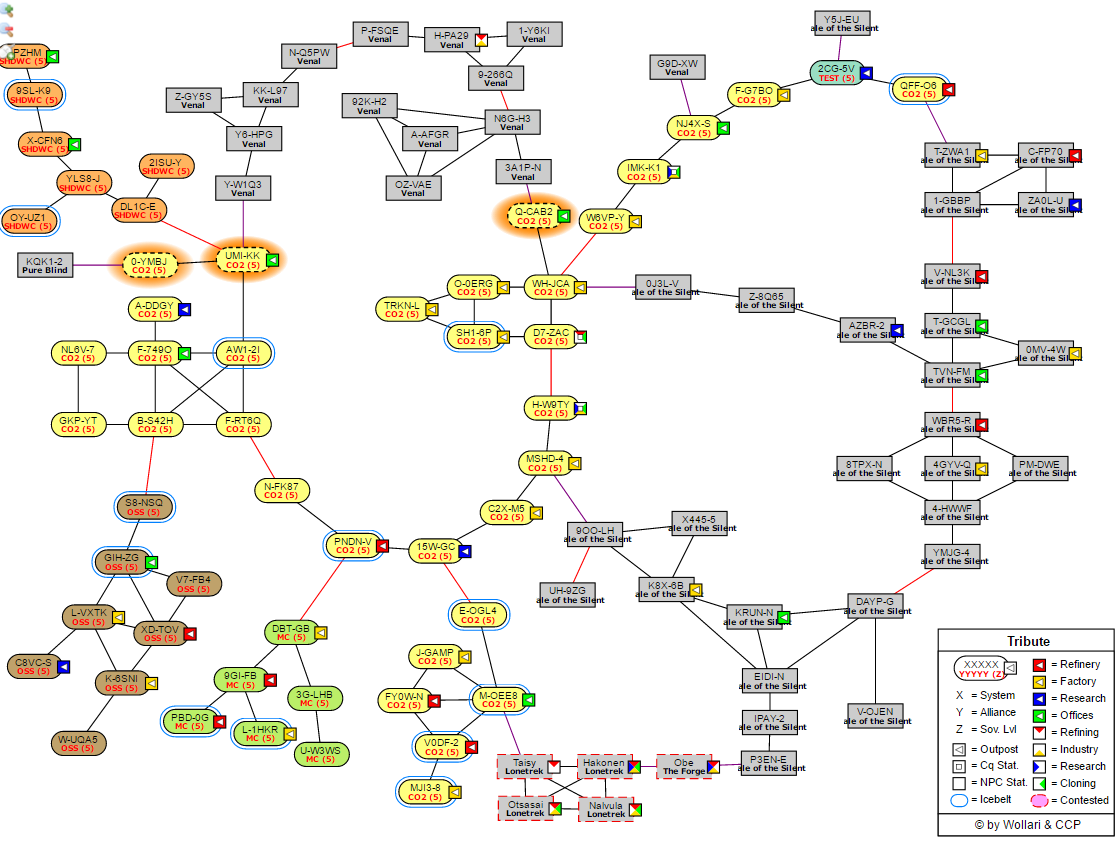 The Tribute region as of the evening of the 26th of September with the 3 systems currently under attack highlighted in orange.