Stain Leviathan Down in Querious

In the last 3 days there have been a large amount of Super Capital losses across New Eden; Ranging from [-LSH-] killing a Nyx Super Carrier and an Erebus Titan to the #REKKINGCREW killing a Hel Super Carrier in a variety of lowsec systems. Now an apparent long term “away from game” Leviathan Titan has been killed in the SKR-SP system of Querious.

The Leviathan was piloted by Kapiton from Xenobytes [XB] of the Stain Empire [SE] Alliance. He has been a member of [XB] since 2009 but his last killmail was recorded on zKillboard back in January 2012.

The Leviathan was killed by a collection of pilots from Black Legion [MEN.], LowSechnaya Sholupen [-LSH-], Confederation of xXPIZZAXx [PIZZA] and friends.

I originally contacted raknor bile from Higher Than Everest [P3AK] Corporation of [MEN.] who provided me with the following response:

I was just on [PIZZA] team speak catching up with wheniaminspace when he informs me he has to go afk because he might be about to tackle a titan. A few minutes later he hops up again and tells me he is pretty sure it will happen and they are ready to get him on his exit cyno. The titan decloaks cyno’s into SKR and self destructs his cyno but space gets a probe result and warps to it. The guy logs off but space aggresses him then we rage form and burn to destination and get there as it is at half shields. Big shout out to space for letting us get on the mail and sorry capqu for shooting the wreck.

Clearly the kill was a result of work done by [PIZZA] and wheniaminspace’s team. Therefore I contacted him about his side of events and he replied accordingly:

I landed initial tackle on the Leviathan on behalf of stephan schneider who was the mastermind behind this kill. The target appeared in a Leviathan, in A-ELE2 just before downtime. After downtime we saw him move his cyno alt to SKR so we sat one jump out with a few dictors, probes etc.

He eventually jumped to a self-destruct cyno in system so we entered local and dropped probes. It was my first time probing a titan and I thought I could get him at 32/16 au but finally got his position at 8au. I bookmarked the spot, cycled probes again and warped to the bookmark. I must have gotten real lucky because I landed right on him and decloaked him. He totally panicked and just closed his game. I think this guy just started playing again after a long break; before aggression timers closing your game would have been the correct decision but now it’s just really dumb obviously.

Anyway we took no chances and brought some light support/dictors over there while asking [MEN.] and [-LSH-] for heavy backup. He was in no danger of surviving and we probably could have handled it ourselves but didn’t think it was worth taking the chance that he could get saved.

Another example of how dangerous it is to move a titan solo nowadays though he probably would have died in Aridia anyway to [-LSH-] if we hadn’t caught him.

credit to stephan schneider to the kill, as he is an ubermensch when it comes to hunting supers. I think about 75% of our super kills in this deployment can ultimately be attributed to him. 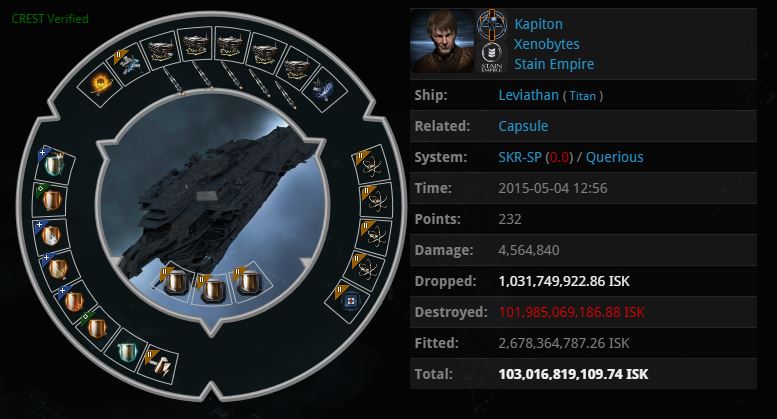 Similarly to that of the Hel pilot destroyed by the #REKKINGCREW who had recently returned to EVE, this pilot was evidently in the same boat as the large rigs, lack of Meta guns and officer hardeners along with the lack of killboard activity suggests. The alliance itself has had it’s most recent kills in the region of Wicked Creek which, if the system of 4-EFLU is used, is a total of 17 mid cyno jumps from the place it died in (obviously not including any shorter gate jumps), making it veru likely that it would have died somewhere on route anyway if that was the final destination.

The pilot has been contacted but at the time of writing no response has been received, should that change this post will be updated accordingly.