The Yarrdy YaRr YARRR [-RUUM] corp, the pickled plunderers of deep space are up to their eyeballs in adventure and swinging from fight to fight with impressive success. No one is as surprised as the upstart’s themselves, having never expected to capture the R3Po-Z, a prized station in Outer Passage.  How can a small merry band of 37, mostly alts, find their way into the deepest space and conquer a station from Legion of xXDEATHXx?

Well, the pilots of -RUUM are not the usual lot.  They may seem like swirling swashbucklers from the outside, but inside they are former pilots of Brick Squad and members of the Alliance Tournament teams for Ministry of Inappropriate Footwork and Tuskers . Both are excellent tournament teams, all excellent pvpers.

Video: This is what it’s like to be in the alliance tournament, POV and fleet comms from The Tuskers Co.

Pirates are generally good at pvp because they see a lot of small team action, which means every member must pull his weight, there’s no hiding in a large pack of 50-200 pilots. Null-sec however, requires less direct skill but more weight. Knocking out stations requires high, and sustained DPS. To get that you need different skills: management of numerous pilots and heavy ships, like capitals.

Normally, defending alliances let the first two rounds of a station’s reinforcement go without a resistance: The first attack is often by surprise, defenders may not form fast enough to effectively intimidate the offenders. The second attack, days later, is allowed to pass because winning the third and final timer, is more demoralizing a loss to attackers. Usually the defenders have an official call to arms (CTA), and leaders look closely at who shows up. Those are when the big fights happen: It’s pvp by appointment.

In the case of R3PO-Z, the attacking -RUUM corp, called on SOLAR FLEET, the former station owners and enemy of current owner Legion of xXDEATHXx. That famous station, “the SOLAR jewel” was rumored to contain riches beyond comprehension. It was deadzoned by Pandemic Legion and locked up tight at the end of the null-sec war that saw SOLAR’s light shut off and go dormant.  Only four trusted members of PL had access to the station. One year and 8 months passed. 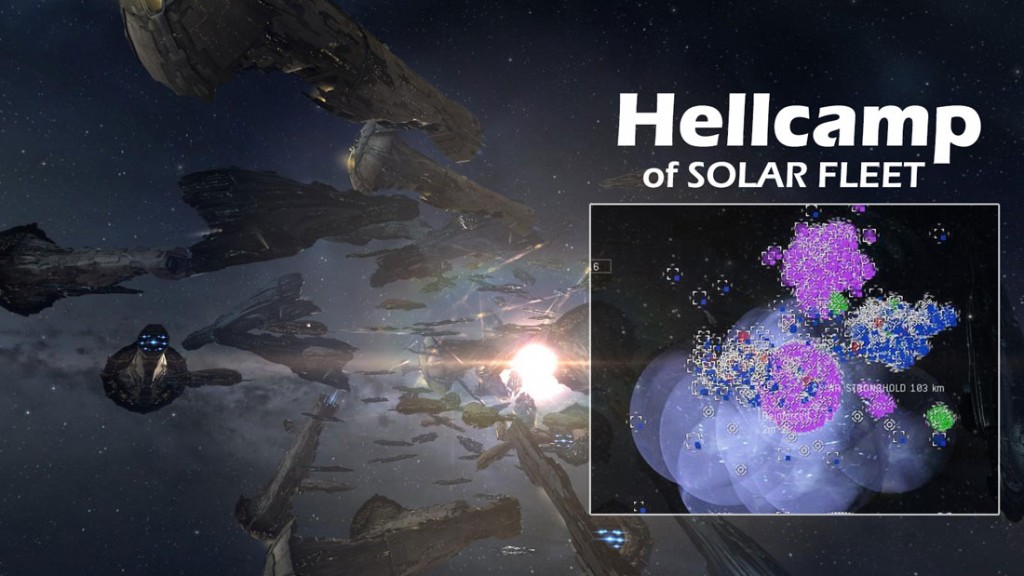 Eventually, SOLAR FLEET came back to life, to the surprise of no one, and helped -RUUM attack the station on the last timer. As described by Bei ArtJay, FC of -RUUM:

Solar helped us captured it and was more than happy for us to keep it. They were happy to see xXDEATHXx lose it.

We got it to last armour timer on our own and then we had reports of a 40-man xXDEATHXx fleet coming to stop us taking it so we asked SOLAR if they wanted to help for fun. So solar quickly formed like 25 guys in Ishtars (was like 1am for them when we asked) and we supported with bombers and caps [capital ships]. Was a really fun battle but we out-fought them and won even though they captured the station with suicide dreads we took out TCU and then held the field.

Bei goes on to deny the rumors of being hired by SOLAR FLEET to take back the prized station:

A lot of the xXDEATHXx Shadow militia/renters/advent believe the myth and think SOLAR paid us to take the station. Last number I heard was 100bil contract, which is hilarious. We are just here for good fights 🙂 We were out here totally solo before the last armour timer.

Yes, we set [SOLAR FLEET] blue now. We made friends during that battle. We literally opened diplomatic relations with SOLAR right before the battle for R3PO-Z

He explains why the station was selected as their target.

I was really excited about Pheobe changes and believed that they would help small gangs do strategic objective stuff. The reason I chose this system to base out of was because I [rightly] guess that time sov timers would be set to EU/USTZ, since PL owned it. I was right^^

My hunch was that with xXDEATHXx’s caps and core fighting force based 5 regions away they had no hope defending space deep in their renter territory if a hard-working skilled corp invaded. xXDEATHXx’s current capital is BWF-ZZ in geminate, so about 25 jumps here and back, and about 7 mid-pints for caps. So every time we hit a renter pos or something they had to go a long way. We would blueball when they blobbed, and when they didn’t, [we] got fights with renters.

[We were] surprised PL and xXDEATHXx didn’t put up more of a fight.

And that is a curious thing: SOLAR’s former capital station was supposed to be filled with trillions in assets, yet PL did nothing to keep it locked, and SOLAR didn’t show any sign of an exhilarated evacuation of wealth. The mythical “SOLAR Jewel” was a fake?

Yes, I had heard the stories about R3PO-Z and my corp enjoyed the story when I told them. I have not seen them mass-evacuating anything even though they are welcome to dock here. As far as I have seen, I haven’t really seen them evac anything [except the] occasional member selling off some personal assets in local

To be honest, I believe SOLAR when they say the whole JAIL thing was propaganda. I’m 99% sure that was PL/Goon propaganda. Solar said they got most important assets out with jump freighters and stuff using jump clones.

If there was so much ISK there they would have come and [gotten] it but, they said they were not bothered about that. [They] just helped us take it to bloody xXDEATHXx’s nose.

Now that -RUUM owns R3PO-Z, and a second Outer Passage station, things are looking up, but -RUUM are also face sobering prospects. They are surrounded by a sea of angry renters, and a formidable power that protects them.

We have been out here a month now and finally xXDEATHXx have taken us seriously, the leader of their militia – Antar Logan has coordinated about 5 b/c-tier coalition alliances and deployed them to SN-Q1T with the hopes of removing us, so we stop driving their renters from the region. We call them ‘Legion of xXAntarXx’.

BL/Solar have to concentrate on their war, so their timers are a priority for them. They said they are happy to help us as we keep those small alliances busy. [If we do] there [are] less of them to help xXDEATHXx on the other front, [so] it’s a mutually beneficial relationship.

SOLAR is engaging in the reconquest of it’s traditional home, Cache, where they have been making steady progress despite being repelled recently in I6-SYN [see article]. No apparent need to recover their jewel, after nearly 2 years. It puts the recent 150 billion ISK gift to Black Legion in perspective as well: They had their wealth all along.

For the merry band of pirates (Cable Uta, Wessler, Commander Cougz, Bei ArtJay, and others) that commandeered stations and are fighting against the odds, what does the future hold for them?

Well, we expected to last a matter of days out here but it’s turned out a lot longer. We plan to stay until we get overwhelmed and go down fighting! We are having fun, but when the Russian sledge hammer finally lands we plan to bail back to Tasti and start gatecmpaing again to have a break. This has been very fun but very intense gameplay. Loot from ratters and stuff has made the operation a profit already even if we lose everything, so we have no reason to run until we have run out of ships.

Going down with the ships, it makes perfect sense.

*UPDATE:  Some words from the pursuing authority:

We’d like to thank Yarr for coming and giving our militia something to do besides shoot rats. Without them life would be too dull so we always welcome the opportunity of some content. The pro x-alliance tournament members of yarr are giving our guys exactly what we need… experience in pew. Also not one timer that mattered was won without BL and/or Solar, so its actually us fighting them and not Yarr. – Antar Logan

SOLAR were contacted for the story, but have not responded yet. We’ll update the article when they get back to us.

Please add your comments, and contact me as needed @Matterall373, or Matterall ingame or best [email protected]