The Cold Battle of I6-SYN Station

The border system of Cache (I6-SYN) saw 1800 pilots collide in dramatic fashion yesterday. The 2 hour long battle featured a cast of rivalries, old and new, but the stakes were between Legion of xXDEATHXx (defending, blue) and SOLAR FLEET (attacking, red). There were, as always, groups of stealth bombers from HERO and CFC that were hoping to get on killmails. Although there were some reports of Brave throwing in with the defenders, which included Pandemic Legion, oddly enough. More on allies in a moment.

This invasion, by SOLAR, into xXDEATHXx space started a month ago [see article]. The conflict between the two “russian” camps escalated as the strategically important station, I6-SYN, owned by xXDEATHXx, reached it’s third and final timer. SOLAR has recently flipped sov in surrounding systems.

That station is the fortress that is the gateway to deep drone region space (Outer passage, The Spire). It also sits one jump away from Great Wildlands (and +1 cyno to Etherium Reach) and two jumps from Geminate, the key to the empire space and northern nullsec. Controlling that pipe is critical to moving forces in and out of the area.

Just as important as the strategic location of the station, is the combatants and their history.

xXDEATHXx has been losing ground to SOLAR, who is trying to reclaim their old territories. SOLAR ruled over Cache from 2007 until 2013. Together with xXDEATHXx and Red Alliance they ruled the “drone lands” with amazing stability, while the rest of EVE was burning itself down.

NCDOT and Nulli formed N3 along with the third N, Nexus Fleet and moved south and take over Against All Authorities (another “russian” alliance) southern territories, then moved in on Red Alliance territories.  That put N3 next to SOLAR: NCDOT (N3) had returned and PL was backing them.

In 2013, N3 waged war against SOLAR FLEET and eventually broke them. SOLAR announced a retreat to lowsec, but PL and N3 did not afford them an honorable retread. Instead they did something no one had seen before: They hell camped SOLAR’s home station (R3P0-Z) and locked it up with only a group of four of trusted PL leaders having the key. No one, but they, had docking rights, so nothing could be snuck out.  This was known as Deadzoning a station. PL even made a special corp called “Deadzone” with a ticker “Jail” that took possession of the station. SOLAR had over 250 jump freighters worth of ships and equipment frozen, and other reports trillions upon trillions worth of assets, but SOLAR has denied these accounts. Years of stability has it’s rewards. 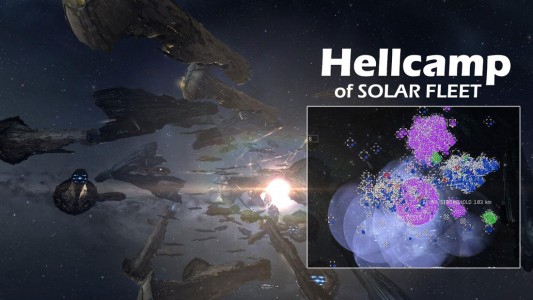 There was some controversy in the move as it is considered a “killing” maneuver. Goonswarm later used the maneuver on Nulli Secunda after N3’s defeat in B-R5RB (CCP historical video). Nulli retreated to Detroid (0-W778), weak, wanting to rebuild. The Goons deceived N3 and caught Nulli by surprise, hellcamping and then locking the station. The deadzone was their last act of the Holloween war, with the expectation that Nulli could not survive. The Goons returned to their home territory, with the satisfaction of an executioner. (note: In the LA E3 meetup the Mittani mentioned to me that the CFC left the Halloween war because “capturing Immensea was on their bucket list.” Once that was done, they were done. This was to fend off criticism that Goons abandoned the “russian allies” during the Holloween war, which despite the pyrrhic victory of B-R5RD, the russians lost.)

After defeating and deadzoning SOLAR, PL handed the territory over to people they could do business with, xXDEATHXx. SOLAR took note. SOLAR is an enigma. It may be the most feared alliance in EVE, with deep wealth and even deeper commitment from it’s pilots. They don’t fail cascade like other alliances, they just go dormant. [ see Dotlan note loss of all sov and stations, yet their numbers are steady].

Late last year PL sold a lot of space to xXDEATHXx. Soon after, PL leader Grath Telkin, mysteriously appeared in a voice over for a video game company from a Russian developer [see article]. Grath has a suitably gritty voice for the dark genre, and there is no evidence of quid pro quo for ingame favors, lets be clear about that.  On the other side SOLAR gifted PL’s rival, Black Legion, 150 Billion ISK to help replace supers [see article]. Keep in mind, SOLAR, to this day, has not recovered their assets in R3P0-Z. Those are deep pockets.

SOLAR FLEET has awaken and is beating on the doors of xXDEATHXx. There is no love lost between them, but it cannot be ignored that SOLAR would like to own R3P0-Z again or at least recover those assets. This treasure trove could be considered the priceless jewel of SOLAR FLEET.

Oddly enough, as SOLAR assaults the gates and xXDEATHXx gatekeeps rain violence on them, a group of drunken pirates have made off with the jewel. Surrounded by a sea of xXDEATHXx systems, the station was quietly conquered by a new corporation called “Yarrdy YaRr YARRR” with the ticker “-RUUM” and a friendly public channel called, you guessed it, “We got RUUM.” 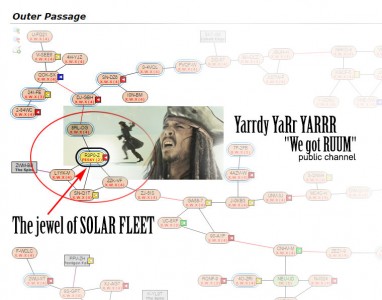 There is no word if any assets have been removed, according to reddit mrbrj wrote,

“Realistically we don’t expect to hold it for more than a couple of days anyway so no way Solar can move anything out really, their stuff is still effectively trapped until they can militarily hold this position. reddit

Interview with Yarr is pending.

This puts Kadeshi in the awkward position of helping PL, after PL wounded them in their home territory [see article].

NCdot had to use wormholes to get themselves to the fight. Their mass calculation came up razor thin so every pilot had to make sure his mass was as light as possible.  No propulsion modules could be turned on and bubbles were deployed around the fleet, another mass reducing move.

SOLAR had summoned Black Legion, Triumvirate., and Confederation of xXPIZZAXx (obviously mocking name), among others. They were already in system and the stage was set. Containers (cans) were spread all around the K-IYNW gate in what appear to be an illegal manner. The cans are meant to decloak anyone that enters so the “holding cloak” tactic of getting everyone into position and synchronized before they are vulnerable, would not work. 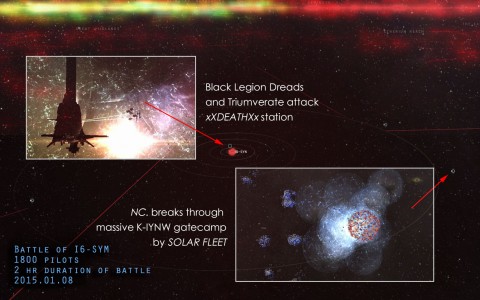 NCDOT, Kadeshi, Darkness combined fleet did manage to jump in, but one of the critical boosting ships was decloaked and instantly destroyed. As soon as the order to decloak was given SOLAR and BL tried to headshot the fleet (kill the Fleet commander), which is considered a dishonorable act (or a signal you mean business).  The FC survived, and thanks to excellent logistical work few Tengus were lost initially, but the fleet was pinned down.

Black Legion suicide dreadnaughts and Triumvirate were already attacking the station and had it well damaged.  When xXDEATHXx engaged Black Legion dreads, Black Legion’s FC, Raknor bile, decided to break away from the gatecamp to reinforce the dreads.

This allowed NCDOT the room it needed to break past SOLAR and warp to the station, where they they proceeded to knock down logistical support for Black Legion.  At the same time the robust numbers of N3 logistical pilots started to repair the system.

At this point PL was engaging the Dreadnaughts and NCDOT shared the primary target, helping to kill them a little faster.  But xxPizzaxx began highly effective void munition type bombing runs that wiped out the Tengu’s capacitors, effectively sidelining them temporarily.

NCDOT, realizing they were not consequential and that the station was lost, immediately warped to the two Sovereignty Blockade Unit (SBU), destroying one and then racing to the other. It was a sprint to the finish line: Black Legion bringing down the station, while PL chewed through them, while NCDOT was overheating everything they had to bring down the last SBU.

Black Legion destroyed the station, but NCDOT killed the SBU’s so they could claim the station, but not the system, essentially losing the station (because it was too vulnerable to keep). This is similar to what PL did to Hero coalition a few months ago.

The day belonged to the defenders, xXDEATHXx. The war is far from over, and SOLAR, if nothing else is determined to reclaim their home, and their treasure, the jewel R3P0-Z. xxDeathxx needs to defend it’s new home. This will be a war of wills for the “russian” alliances, with powerful and motivated allies on either side.