The Dark Arts – I. ISK Doubling

What if I told you that you could make ‘ticks’ which ratting super pilots could only dream of? Plus, without risking a 20 billion ISK ship or being a part of a major Nullsec alliance, sound more incising? Well it’s all possible in EVE. Welcome to the first part on what I hope will be an illuminating series on the dark arts of scamming in New Eden.

We’re going to look at one of the oldest scams in the book: ISK doubling. Unless you’ve somehow managed to avoid the trade hubs of Eve, it’s likely that you’ve come across a shady figure offering to double any amount of ISK you send to him or her.

Despite its antiquity, this scam works and works well, often netting ticks which would make super ratters jealous. That’s because it preys on the greed of other players: the opportunity to get something for nothing is too tempting for some to ignore.

There are a few variations of the ISK doubling scam, each of which come with different levels of effort and reward. From lowest to highest effort:

I’ve tried all of the above, and by far my best sessions have come from the game show method, so that’s what I’m going to focus on today.

Setting up for ISK Doubling

To do this properly, you’re going to need:

You might be asking yourself why you need starting ISK. You’re supposed to be making money, not losing it, right? Well yes, but in order to make the most money doubling, I’ve found, paying out the earlier, smaller ISK amounts often encourages people to a) thank you in local, legitimizing your scam; and b) play again with larger amounts of ISK.

Scamming is inherently a PvP activity, but instead of pitting your fitting skills and knowledge of game mechanics against an opponent’s, the arena is your ability for psychological manipulation against their ability to resist temptation. The most successful scams are those which successfully overcome risk averseness in other players. The more people thanking you in local and vouching for your willingness to pay out, the more likely people are to drop their guard and take a chance.

The purpose of the cover story is to provide a reason for other people to suspend their disbelief. Something for nothing becomes easier to believe when there’s a reason for it.

Make it feel like a milestone, and they are getting to share in it aids convincing people it’s real. You’re also going to need a cover for why you need them to send ISK first. I have my preferences, but I’m going to leave this one to you to figure out, because mine would make me too easy to identify.

The purpose of the rules is to create a sense of urgency in other players, to make them feel like they need to participate NOW instead of waiting. Some rules I like:

Other rules are up to you, just remember complexity can help sell the scam, but too complex and pilots will skip the read.

You need to get a feel for good times to do ISK doubling. The worst times are when other scammers have control of Jita local — especially other ‘game show’ scammers who will be talking a lot and encouraging a lot of conversation. Identify a time when Local is active, but not too spammy that your messages will just get lost, and open up with something like this:

Hey Jita, I just got my first titan and I want to celebrate with everyone by giving away 10 billion ISK. Send me any amount between 5 million and 500 million and I’ll send double back.

Wait a minute for a skeptic to pipe up. If they don’t, use one of your alts to play the role of the skeptic:

After this, your next alt can be the naive ‘potential victim’.

You’re going to want to keep spamming your initial offering every 5 minutes or so, upping the ISK paid out every paste or two.

Make sure you actually send the ISK between the characters, you will encounter a few breeds of skeptic whilst doubling, but a common type will ask for screenshots. ISK doubling between you and your alts is a really easy way to silence or befriend those players. Additionally, it ensures you have access to the wallet screenshots when required.

When you start getting bites, you’re going to need to decide who’s getting paid. There’s no exact science to this, but earlier and smaller payments are good candidates for repayment. Make sure you don’t repay immediately, you want people to think you’re busy so that the people who don’t get paid won’t realize immediately that they’ve been scammed. When you pay someone, drag their name into local with how much you’ve sent them. With any luck they’ll say thanks, further legitimizing your scam.

Skeptics come in various breeds. While some can be ignored, some are best responded to. The rough types can be summed up as:

Usually the people you’ve paid out will help with the skeptics too.

Hopefully you’ll have got a few decent bites, this is an example of a morning session of doubling for me (the 150m payout and the 100m payout were to my alts): 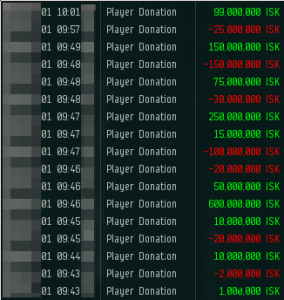 Here I made about 1.1 billion in approximately one tick (20 minutes). A good Nyx pilot in Delve might hope to make a tenth of this in the same period of time. Having said that, some days you’ll lose money. Some days no one will bite. Some days the guy you scammed yesterday is going to log on right as you start and put everyone off sending you any ISK.

If you want to profit from another ‘game show’ ISK doubler, there are really two ways to do it:

That about sums up ISK doubling, the little psychological ploy that could. Next time, we’ll be looking at another way to profit from peoples’ greed: the 3SM game, which relies on subtly modifying contracts to trick people into paying the wrong price or getting the wrong item.

Have you been scammed? Pulled off any great local games? Got a specific scam you’d like to see covered? Sound off in the comments!