Kirith Kodachi: For Faction Warfare, It Was Too Little Too Late

Earlier this week, two of the largest and most active alliances in the Caldari Militia have announced their withdrawal from faction warfare: 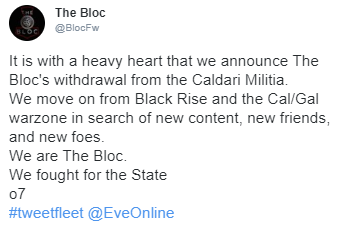 The Caldari Militia’s response was again largely passive. And I will levy the vast majority of the blame at the Templis CALSF and The Bloc leadership team.
Whether they were misguided, unmotivated, or ill informed, the choice to passively lay down while we conducted the offensive has caused catastrophic harm to their organizations. Each week, fewer of their active PVP’ers participate. Major defense fleet operations they form have withered, to the point where they are overwhelmingly outnumbered by Galmil, and are often forced to stand down while structures are killed.
The facts are quite clear at this stage that the inaction of Calmil leadership has led to a steep decline in activity by their players, at all timezones. And a counterattack has still not come.
When the offensives at Eha began, I was utterly astonished to see how little resistance was offered by the Caldari Militia. Over four days, the system went from 0% to full conquest for the Gallente. There were fights every hour of the day for the last few days, however, the Caldari were consistently overmatched and simply didn’t have manpower to support any serious defense.
This comes down to a failure to properly recruit and motivate younger and moderately skilled characters to participate in these kinds of fleets. And even if they had a higher skill player base, they could have conducted guerilla warfare with higher skilled ships such as Omen Navy Issues, or other fast faction ships, to whittle down the Gallente blob. But the same tired tactics of the past were rehashed over and over. Navy Hookbills. Catalysts. Cormorants. Punishers. Over and over again. The result is now clear for all to see.

Going into the way back machine, back to April of 2018, I wrote something:

Without intervention, Faction Warfare is going to wither and die. Right now its quickly becoming only a farming mechanic with some jostling over tier levels and no strong desire for open direct conflict outside of meaningless good fights. Far more engaging is the emergent play over structures like POCOs, citadels, and engineering complexes as well as the refineries and moon politics next year, none of which has any hook into faction warfare. You might as well not be in a militia unless you roleplay or your members need the mechanic to make money. And that’s sad.
It is often said that Faction Warfare suffers from “good enough” syndrome in CCP, but at some point we need to tell CCP loudly that FW is no longer good enough but is indeed dying. Do they want to save it?

I believe that CCP is letting Faction Warfare die. A year and almost a half later, there has been no large effort to reinvigorate the feature and we see the end result of the dominoes falling since before that time. As the players in the militias aged and gained wealth and experience and security, without new blood to freshen the content , it was only a matter of time before one side would come to dominate and force the other side out. Gal Mil got lucky with the expedition to Cloud Ring being so successful and setting up the content to drive their alliances and coaltion forward while Cal Mil Alliances languished. As Gal Mil forged new deals with null sec power blocs, the allies of Cal Mil withered away. When a strong and unified (mostly) Gal Mil decided to move on the warzone, Cal Mil could only watch their homes burn.

And CCP allowed it to happen by standing by and letting the process play out. Many things could have been tried to spice up the warzone, there were no shortage of ideas. CCP lacked the will to try.

I wish my old Caldari foes good fortune in whatever new arenas they go towards. Hopefully Faction Warfare will get some real love in the future to bring you back.

We are proud to bring you the stories, opinions and musings of a long time pilot who has dabbled in everything New Eden has to offer, he writes and podcasts about his opinions and adventures at Ninveah.