Watch This: The 9-4RP2 Keepstar Defence Part 2: The Vulture Patrol

[Disclaimer: Yossarian Yassavi is a member of Darkness., an alliance fighting on the Northern side of the conflict, but his opinions do not necessarily reflect those of Eve News24, his alliance or his corporation.]

So much hype went into the buildup of this fight, only for a somewhat underwhelming main-event. While in the latter phase of the battle depicted above serves to illustrate the near-breakdown in game mechanics mentioned and commented on at length in my previous article.  We will focus mostly on the 5-hour “afterparty” I participated in during the aftermath which was quite rewarding from a pilots perspective. Why on earth would anyone actually WANT to stick around after such a grueling fight? There are some clues from history, and a few aspects of Eve online that tell us why 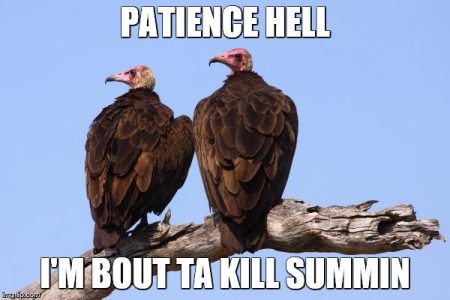 Historically, looting the battlefield has been an inevitable, if sometimes unsavory, part of the aftermath. The Iliad informs us that as far back as the Trojan War the bodies of the dead were literally stripped naked. Hardly surprising as back then a single loincloth took many hours if not days of manual labor to produce. This was standard practice well into the age of gunpowder. One casualty’s bloody underpants might just end up passed down through multiple generations of local peasants. The scarcity factor is doubly illustrated by the fact that the ancient equivalent of dog tags used by the Ancient Greeks were made of the poorest-quality wood, so there would be no reason for the winners or local residents to steal them of their cold bodies. During the 19th century, dentures were known as “Waterloo Teeth”. You guessed it, teeth pulled from battle casualties used to find their way into the mouths of the living. In the aftermath of World War 2, a certain Samuel Cummings started a company called International Armaments which managed to equip dozens of third-world armies and vintage arms collectors exclusively from abandoned guns left on the European battlefields!

Looting in Eve is a rather cleaner affair. Nothing sanitizes soiled underpants quite like the total vacuum of space. The battlefield following the 9-4RP2 Keepstar defense did attract its fair share of scavengers looking for the valuable Tier-2 ship modules, faction ammunition, and nanite repair paste guaranteed to be found on the hundreds of wrecks littering the battlefield. While not as laborious to produce as the Greek loincloths of old, all of these items require a certain amount of time spent mining, running missions or scannable anomalies, or various other PVE activities, and they sell at healthy rates in the nullsec markets where much has to be imported. It’s all profit when it falls off a truck, right?

There is another thing about the aftermath of massive fleet fights in Eve. Say you get disconnected (as probably half the participants on both sides were) when you log back in you will usually spawn back in warp, about 1,000,000 Km off from where you were on route to your last in-game position, where you are likely to end up in an instant-death zone. Since many pilots are all too likely to ignore orders to not log back in until the next day. This meant that for the next few hours, there would be dozens, if not hundreds, of mainline DPS ships and capitals which are pretty helpless when caught out logging in alone. Unfair? Why would anyone log in willy-nilly if not willing to accept the risks?

I kept my expectations low; I was just there to pad my killboard with abandoned fighters, and possibly a stray looter or two. First, there was a Nidhoggur that the pilot seems to have ejected from… which is a valid tactic, I guess, if your implants are worth more than the ship. 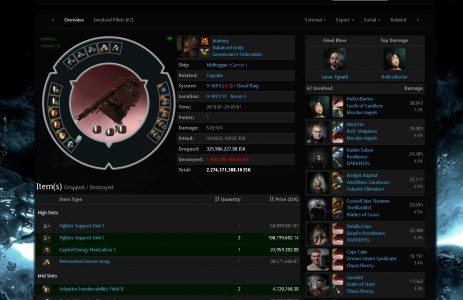 The second target was an Archon class carrier which was piloted quite competently and had this pilot been in a solo-fit carrier with proper pvp fighters instead of a depleted hanger of structure-bashers, I have no doubt this pilot would’ve tanked us all night. That no one came to support him surprised me. Credit is thereby earned that he managed to pick off 3 of his attackers with what he had in the time he had. By far the most competent Pilot I had the pleasure of battling against the whole engagement. 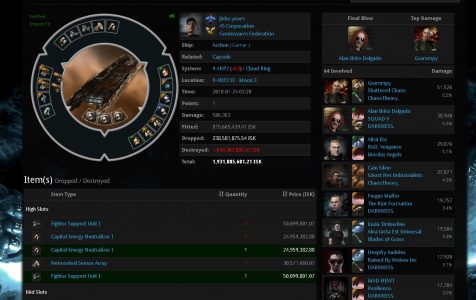 The main highlight was bumping a Minikowa (I kick myself for not recording the bumping part) off of one of the besieging citadels and taking it down. It could not dock in the small Astrahus citadel it was tethered on, as Minikowa-class force-auxiliaries are too big to enter. Why no one lit this guy an escape cyno is anyone’s guess. 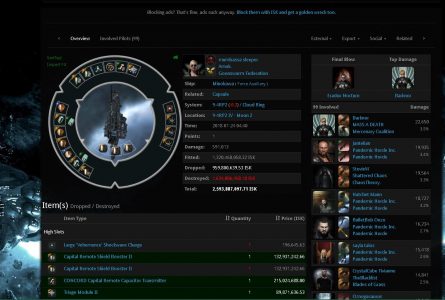 Another archon is then tackled, but we had to warp off as our ships couldn’t tank what the bombers were dishing out. I don’t remember if they were goons or some third party. Some tankier Panfam subcaps succeeded in finishing it off though. 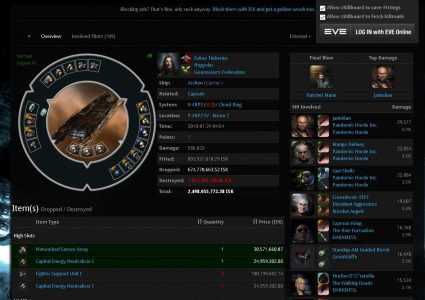 I’m frequently accused lately of bias / bashing / being utterly one-sided and all that jazz. I find that odd. I’m the first to acknowledge a challenging fight. My coverage of the recent conflict with Drone Regions Federation was notable for mostly being carried out in acknowledgment, and admiration, of each sides strengths, and for me ended with a cordial interview with DCU leader Fafer.  Truth is I’m a bit of a heretic within Darkness. We’re supposed to limit any commentary to “GF” and rise above any salt or related cancer. I’ve strayed wayyy off the reservation in that regard. Maybe I’m rather less inclined to be open minded about this particular opponent what with history and some fundamental taking-exeception-to the fact the opposition this time around devotes hundreds if not thousands man-hours across multiple channels perpetuating BS myths into their members from Day 1 that they are the “unstoppable monolith of this galaxy”… that “Fights, Wins, Repeats” . Am I the ONLY ONE who notes the irony that Imperium propaganda is sounding more and more like the old Band of Brothers they originally railed against? I can’t help but feel a twinge of satisfaction that twice in 6 months now I have played my own small part helping the North to send it scurrying back with its tail between its legs. It’s amusing the rancor that comes when one tired old rock miner pokes back with a little bit of flair and more than a grain of truth.

Am I bothered I ruffle some feathers?  In certain schools of journalism if your pissing loads of people off you’re getting pretty darn close to getting it right.

Between two extremes is where a balance is to be found. Despite my position on various aspects of the leadership of the opposing force, overall this was a very challenging campaign that does show, even behind the spinscreen, that the Imperium has a powerful force and more than a handful of competent FC’s.  There were moments where it could have gone the other way.

This much is confirmed by many leaders on the Northern side. I reached out to Pandemic Horde Alliance Leader Gobbins for his thoughts on some close-calls during the campaign: 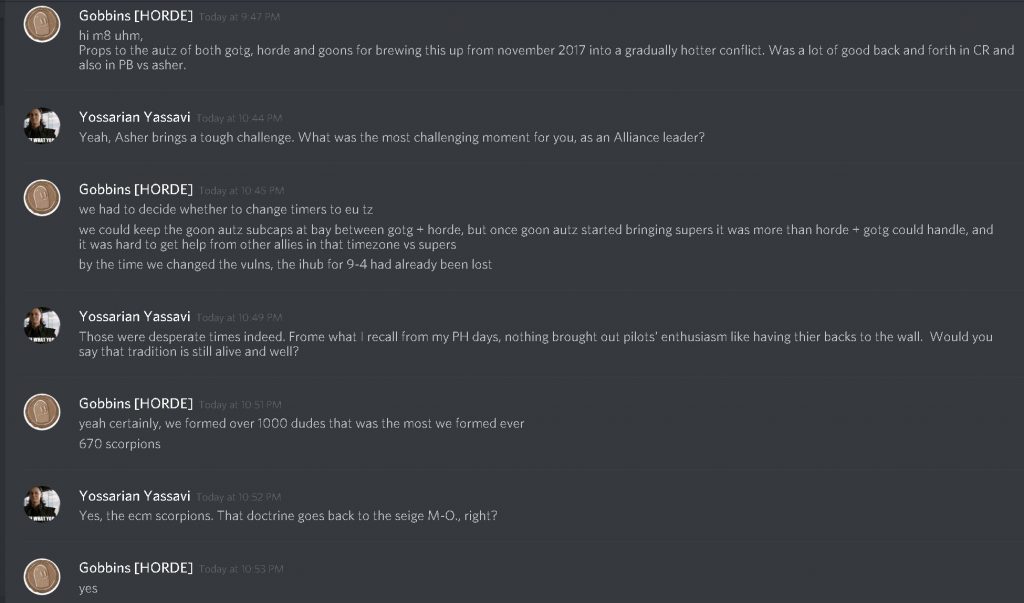 “The fight was [The Imperium’s] to lose,” he says. Between the lag and technical difficulties, The North thought they wouldn’t be able to mount a capable defense. “We couldn’t believe we survived and we couldn’t believe they didn’t commit. When [The Imperium] went into the fight they knew it was going to be hard but they knew they wanted the challenge. Do I believe they got the short straw? Maybe. But I do know they went in knowing what to expect.”

“Both sides had the opportunity to fight their enemy Titan fleet on their own respective Citadels, it’s a pretty rare chance and both sides elected to pass on the opportunity to focus on attacking and defending the objective. EVE is all about the meta-game. If Sort Dragon thinks he can goad us into a foolhardy attack next time by calling us out in PC Gamer, it would be a big win for him. Don’t expect us to make that kind of mistake”

Don’t worry Asher. We’ve all grown used to a certain lack of will when it comes to the Imperium risking it’s supercapital assets in any meaningful way.

Touching on the strange twist of the Imperium turning on thier erstwhile ally Test,  we reached out for clarification to Test Alliance Please Ignore Senior Diplomat Dran Arcana: 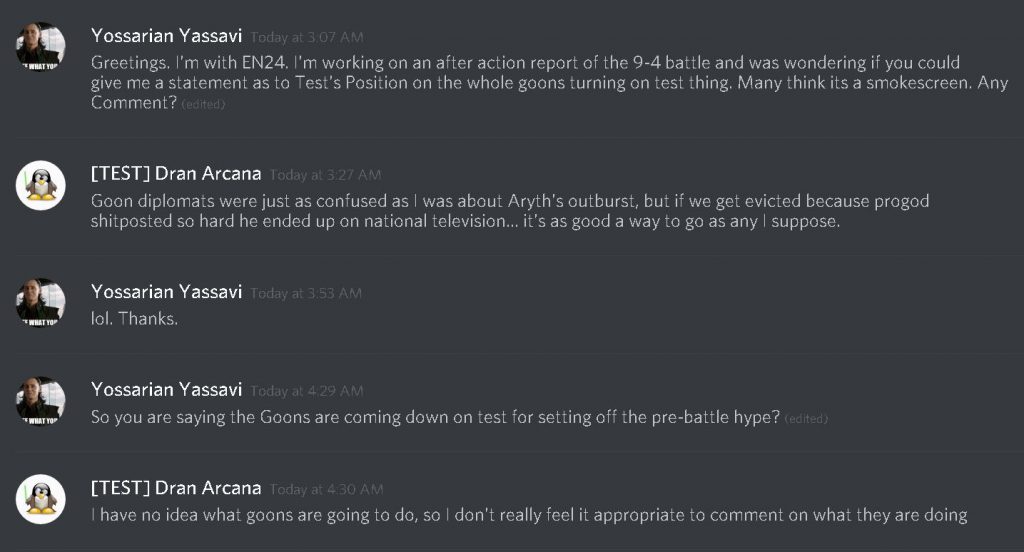 Say what you will about Test, they’ve got a witty answer for everything. Is all the noise just a misunderstanding on account of a few oversized egos? Plausible. I for one remain suspicious about the whole thing.

However, prudence may just be the rule of the day at Imperium HQ at time of writing…. seeing as the burning of Delve has escalated into a full-blown conflagration continuing unabated, with swarms of GOTG bombers recently added to the combined efforts of the bee control initiative, PL’s, and NC(dot)’s efforts, to wreak havoc in the heart of Imperium territory have clearly gained momentum, whilst the North has been… much quieter since the cleansing of ROIR.

With the pullback, I can finally devote some time to an update of my old series on Planetary Interaction which readers can look forward to having serialized here.

I will confess to a limited degree of looting. Strangely there is as of yet no way to reprocess corpses in eve into anything useful so collecting them is, well…  everyone needs a hobby.   Will this humble narrator one day fill a station container with said corpses? Waiting for the day an update comes when you can launch them from a turrent designed for just such a task? A man can dream, a man can dream.