Molding the Meta Part 1 – The right tool for the job

The meta is an abbreviation of most effective tactics available. In gaming, it usually refers to ships, items or strategies that have proven to be powerful, and thus many people want to use.

Why are things the way they are, and how has it come to his? These are questions that many of us never bother to ask ourselves. Despite this, it can be quite educational to think about how things became the way they are today, this can teach us about past mistake, and keep us from making future ones. In Eve the term meta also refers to the current political landscape. I’d like to iterate that I am not referring to this kind of meta, in this article.

In EVE the ship-meta has led us to a situation where large fleets of Battleships and T3 cruisers battle it out in nullsec. While in many smaller scale combat situations take place in smaller ships like in lowsec and nullsec. In this article, I’ll take a closer look at why this division came to be. Why are the large and powerful ships favored in large fleet battles and why do players prefer the faster ships for small skirmishes? Of course, the value of the ships and the willingness of players to risk more valuable ships is an important factor I’m not going to discuss too extensively, as it’s more of a personal thing as to what what a player believes to be expensive. Instead let’s take a closer look at two ship types, their strengths, and weaknesses and think about how these tailor to a specific setup. I’ll focus on battleships and frigates, as these ships differ the most in their stats, and make an interesting comparison.

Frigates are fast and affordable. They have the speed to get into the fight quickly, do their thing, and when they eventually get lost, be replaced easily. Looking at frigate fights in a 1v1 setting, there is usually a brief chase in which the contestants try to catch the enemy (or get the hell out) and maneuver their ships into their optimal range. When the shooting starts the fights are usually over very quickly. In my experience within the first 30 seconds after they start (some exceptions). 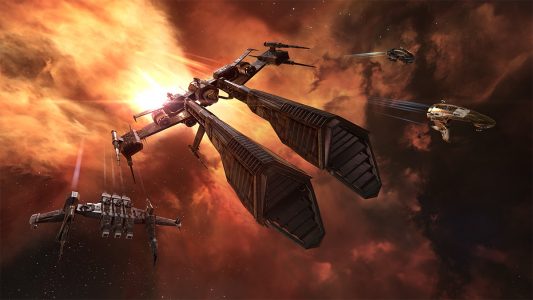 But what makes frigate fights so fast? It has everything to do with the statistic lines of frigates. Looking at T1 ships, they often have between 125 and 175 Damage/second (DPS after this point), and the effective EHP of frigates is relatively low. Normally most fittings fall somewhere between 2500 and 7500 EHP. If these ships are pitted against one another, you will realize why frigate PVP is so fast. With 175 DPS, it takes only 15 seconds to chew through 2500 EHP. And even with the lower  125 DPS, you can destroy a fairly tanky 7500 EHP frigate in only 60 seconds. Especially now that people prefer high damage setup over the high tank versions. Of course, good damage mitigation and suboptimal ranges could make the battle last a little longer, but in general, the fights will still be over quite fast. When looking at the balance between damage and tank, it’s interesting to calculate a ratio. With an average of 150 DPS and 5000 EHP, the tank/damage ratio is 33:1, an average number.

Now let’s look at battleships. Battleships the biggest ships many people will ever fly (Many people never access capitals, but the story is similar). Battleships are expensive but have a good damage potential,  more importantly, they are very hard to kill. A fitted T1 battleship has a damage capability somewhere between 500 and 1000 DPS. The tank depends on the fitting but commonly falls between 75 and 125.000 EHP. Taking an average of 750 damage and 100,000 EHP into account, that would leave us with a tank/damage ratio of 133:1, a very high number, compared to the 33:1 of the frigate level. Pitting two  battleships against each other, it would take them over 2 minutes (133 seconds to be exact) to break one another

Comparing the two ratio’s you will see that the larger ship type has a relatively high defensive stats and relatively low damage output. The smaller frigates are just the opposite. You could find this pattern in all different ship classes, bigger ships get an increase in damage but a bigger increase in defense. Their damage doesn’t scale as impressively as their tank. This generally means that fights between larger ships take longer than smaller ships, simply because it takes them longer to chew through that HP-buffer.

Looking at fleet combats many things favor the slow and steady approach that battleship brings, most importantly the ‘delay’. There is usually a time-delay of 5-10 seconds between the fleet commander landing on the grid, and the fleet reacting to his first orders. Caused by normal personal reaction times and assessment of the situation. This could lead to people getting ‘left behind’. In a slow battleship fleet, the usual range someone could fall is 5-10 km behind the group. With a frigate fleet, moving at 3000 m/s a small time delay may result in a distance over 50 km. That could result in the stragglers being caught and being out of repair-range of their logistics. High-speed frigate-fleets are a lot harder to command and control. Many frigate FC’s start their fleets with comments like: “I’ll tell you where to go, but you are the one flying your ship, be smart” for this reason.
A similar delay in shows up with logistics. It takes time for logistics pilots to find a damaged ship, lock it and start their repair cycles. With a battleship, the 100,000 EHP buffer, gives the logistics some time to save it (unless the enemy fleet can one-shot them). With a 5000 HP frigate, the help will often arrive too late, especially if multiple ships start shooting it (have you ever tried keeping a large fleet of 3000 m/s frigates in logistics range?). It just doesn’t work very well. When taking the above into account, you’ll see that the relatively high HP and slow speeds on battleships are advantageous in keeping them alive and coordinating fleet movements. While many FCs find frigate fleets uncontrollable due to the speed.

In solo-fights, on the other hand, there is no delay between commands, no logistics, and allies to anchor up. These fights are more focussed on the pilot’s own wits and skills. And thus slowing the fight to a controllable speed is less of an issue, the ratio’s of tank/damage is less of a factor. Instead, a pilot would prefer an engageable ship (A ship that people are willing to fight), that is able to escape when in trouble (unless you like being outnumbered 20 to 1, in which case you can take a battleship just fine) and is quick enough to catch targets before they flee. Preferably all of the previously mentioned. With this in mind, smaller ships like frigates, destroyers, and fast cruisers are better suited. Of course, a ship with high damage and tanks has an advantage, it enables the pilot to kill more targets, but the balance between the two is more skewed in favor of damage output. Ships with high DPS are favorable, as they allow the pilot to take an enemy out before help arrives.

In nullsec, PVP battles there many non-battleship fleets. Namely T3 cruiser or destroyer fleets and or even caracal fleets. You could think that all of the above doesn’t make any sense. But let’s take a closer look at those setups. 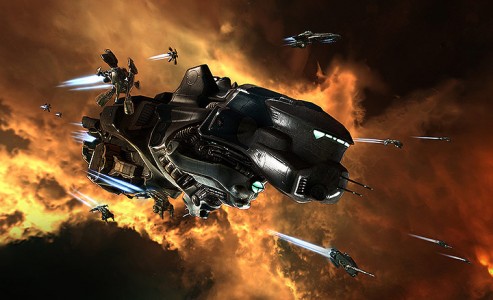 It may seem a T3 cruiser fleet, being cruisers have an unfavorable hitpoint/damage ratios. But the T3 cruisers are a bit of an exception to this rule. Common fits of these ships are actually fairly tanky. Their tank has usually less raw HP than their battleship counterparts around 50,000 HP, but when fit with shiny faction armor plates and hardeners they can quickly go to 100 to 150.000 HP, combined with a small signature (which gives good damage mitigation) and these cruisers become harder to kill than most battleships. Comparatively, their DPS usually ranges somewhere from 500 to 800 (quite close to that of a battleship). Taking this in, they are actually more suited for the job than they may seem at the first sight. Of course, a well fit T3 cruiser can be a lot more expensive than a fit battleship, but in exchange for that value, the pilot gets some well-needed maneuverability.

T3 destroyers follow a similar pattern. For example, a fleet fit jackdaw often has DPS  between 150 and 250, their tanking capability close to 20.000 EHP. With a damage ratio of 100:1 this is actually pretty close to the ratio of battleships. When adding defensive mode, a 70 km engagement range, and a small signature, these ships are quite durable and a fair choice for a fleet. Not that these ships get anywhere close to battleship tanks, but that isn’t always necessary.

Caracal fleets and many other T1 cruiser fleets for that matter would seem not really suited towards fleet combat. Their damage and tank just don’t hold up in a comparison with battleships.  Let’s be honest they aren’t the greatest ship for large fleet battles. Still, people fly these, because they are often ‘good enough’ for the job. For many fleets, there is no need for expensive ships. Why risk a 25 billion battleship fleet, if  2 billion in caracals get the job done? They are fast, flexible, but also expendable. But when the important objectives are being contested, most FC’s will probably prefer a sturdier fleet.

In conlusion, larger ships with high hitpoint/damage ratio’s make battles slower, which is generally favorable for fleet combats, as it’s more forgiving when fighting with a delay. In solo PVP, these factors don’t matter, which favors the speed and ease, of engagement, of smaller ships.

In the next article “Molding the Meta – Part 2 Speed vs power” we will take a quick look at the selection of ships for specific situations.