To set the scene, there’s been a war going on in Feythabolis over renter space for a little over two weeks
now. Up until recently, this relatively quiet region deep in the south east has been home to the
alliances of Wings Wanderers (WSHOT) and Band of Backstabbers (BoB) who are renters of SOLAR
and Circle-of-Two (CO2) respectively. CO2 are alleging that they had an agreement for SOLAR to
hand over an unspecified number of systems and moons to them after a 6 month time period;
however, nothing had changed hands after 8 months. On the flip side of the coin, it is alleged that
FCON and TEST helped to broker the deal between CO2 and SOLAR, and that there was no such
clause for SOLAR to hand over any additional assets at any point. Neither side has come forward
with evidence to substantiate their claims so who is breaking what agreements still remains to be
seen.

Phoenix Federation (PF) has for a long time had a Defense Agreement with SOLAR to protect their
renters in Feythabolis in exchange for some valuable moons and assistance from SOLAR should PF
Space ever be invaded.

Recently, CO2 attacked WSHOT holdings in Fey in order
to take the assets that they were allegedly promised, plus a
bit extra to send SOLAR a message. There’s a rumour also
been flying around the Discord channels that CO2’s Leader
gigX is unhappy with CO2’s revenue and wants to increase the income generated from his renters. How
accurate this claim is I unfortunately do not know. Diplomats had been hard at work to try and find a
diplomatic solution; however, it would appear that these talks ended in a stalemate leading to the situation
escalating into a full scale war. In response, PF has deployed to BDJ4-E and has been joined by their allies
SOLAR and the rest of DRF. So far the “Droenix Federation” – great name by the way! – according to a Reddit
user whose name I can’t be bothered to try and find again has managed to successfully halt the initially
successful CO2 advance.

Thursday 10th of August had been a particularly busy day. CO2 had previously reinforced a large
number of Sov Structures across the AV-SCL constellation and Entosis’ers from both sides had been
hard at work for several hours doing their thing. When EUTZ folks started getting home from work
both sides of the conflict started rallying their troops to fight.

PF initially formed a Cerberus Fleet before switching to Feroxs and managed to form a 130 man
fleet with an additional 25 Dreadnoughts in reserve. SOLAR and DRF both formed Machariels and
numbered 300 or so between them. CO2 already had a small Fozzie Claw Fleet out and formed
Apocalypses of their own and were joined by Red Alliance who brought Feroxs of their own. After
forming both sides waited, and waited, and waited. I was part of the PF Fleet and between formup
and undock it was about 1h40m while either side waited to see what the other did, all the while
WSHOT Ihub, TCU and Station nodes began decloaking and self-repairing.

Eventually, the allied fleets undocked and bridged to a friendly Astrahus in CFLF-P and jumped into JPTPA,
and so it began. A large number of CO2 Interdictors had bubbled the in gate and were
destroyed in short order. Red Alliance’s Ferox Fleet were parked on a perch about 300km above the
gate and CO2’s Apoc’s warped in at max range trying to snipe any ships still caught in the bubbles.
Both sides traded fire at long range with neither side losing much until Red Alliance warped down
and got very quickly annihilated. 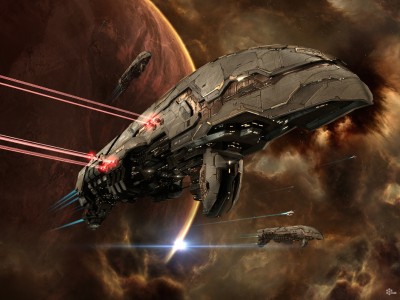 With their allies gone, CO2 decided to escalate things and brought 29 Carriers and 3 Apostles onto
the field. This is what PF had been waiting for. Up went a Cyno and the PF Dreads jumped in,
immediately entered their Siege cycles and began chewing through the Carriers. During this part of
the engagement, the subcap fleets were busily engaged with the Apoc’s and weren’t able to secure
tackle on the Carriers allowing a large number of them to warp off. Inexplicably, the surviving
Carriers warped right back into the Dreadnoughts which were still in the middle of their Siege Cycle
and proceeded to be decimated by the Dreads and the Subcapitals which had warped down to add
their own DPS and tackle into the fray. Of the CO2 Capitals that entered the fight only 3 managed to
escape for the loss of 3 PF Dreadnoughts … One of my Corp Mates for whom this was his first ever
Capital fight was, despite having his Revelation destroyed, buzzing at the amount of fun he had and
also acknowledged, through the laughter, what a mistake he made bringing a character name
beginning with A to a Cap fight.

With all attention now on the CO2 Apoc’s, they started to melt very quickly under the combined
firepower of the allied fleets. With their numbers dwindling and their Capital Fleet in tatters, CO2
made the call to extract. They escaped through the CFLF-P gate, losing a few more ships in the
process, and warped to a Citadel of their own.

The victors proceeded to loot the field of what they could and blow up the wrecks of what wouldn’t
fit in their cargo holds before heading back home, reinforcing CO2’s Ihub in 9-ZFCG for good
measure along the way before standing down.

TiDi was present throughout the battle at varying amounts reaching a peak of 40% at some points.