Twitch streamer, CEO of White Knight Social Club, Eve NT, and Alliance Tournament, commentator Rahne Chocolate undocked from the Amamake HYDRA Keepstar in her personal Opux Dragoon Yacht. Upon doing so, she was caught and killed by the Keepstar defenses, and a HYDRA Apocalypse Navy Issue, resulting in the second most expensive ship killmail ever generated of 500,000,000,000.02 billion ISK lost according to Zkillboard. This comes above a 408,270,300,733.04 ISK officer-fitted Vanquisher but falls just short of the largest ever ship killmail Gold Magnate loss at 501,575,751,130.86 ISK. 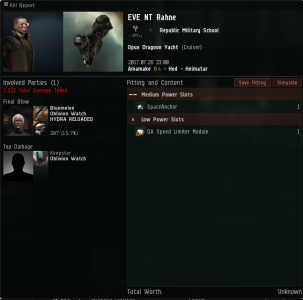 Opux Dragoon Yachts are special edition cruisers, handed out by CCP, to be used as “camera-boats” for tournaments due to their ability to lock many targets, and modules which allow them to stay in place. If the modules had dropped, it is unlikely that the looters would have been able to keep them due to the specific use they were intended for and how they could be abused outside of that.

It is unknown why Rahne undocked at the time she did but did make this comment, about her loss:

It was a mistake that should have never happened. I accept full responsibility.

Curt Adrano is the CEO of Waking Dreams in Manifesto., and an editor at EveNews24.