Vale of the Silent: Tackled Rorqual Leads to a Nyx Destroyed

Y-ZXIO system, Vale of the Silent region. In the early hours of the 29th of April, a battle unfolded in the system leading to a destruction of a Nyx super carrier.

The chain of events that led to the Nyx’s destruction started with a Triumvirate. [TRI] Stratios cruiser fleet hunting for targets. The 35 pilot fleet had been searching for targets to bridge on in the vicinity but found nothing. Finally, as a last resort a Tengu strategic cruiser fitted with a covert cynosural field generator was sent to find prey. The ship arrived in the Y-ZXIO system where it found a couple of super carriers and a Rorqual industrial capital ship tethered to a citadel. However, a cursory check of the directional scanner informed the pilot that there was still another Rorqual in a mining anomaly.

The Tengu warped to the site, finding the Rorqual immobilized. Before the ship could warp off, the strategic cruiser tackled it and lit its cynosural beacon. The covert beacon allowed the Stratios fleet to bridge through and the ships materialized around their target, quickly adding their warp scramblers to the mix. This was done in time as a Blackbird cruiser uncloaked on the grid to try and jam the Tengu so as to release its hold on the ship. The Stratios fleet easily dispatched the ship only to find the local residents, members of Rate My Ticks [WERMT], have warped in a mixed squadron of capitals into the fray. Whats more a Nyx warped to the site as well, landing 100 kilometers off the fleet.

The Triumvirate. fleet commander quickly pinged his alliance for reinforcements. A squadron of dreadnoughts and interdictors was hastily assembled, the interdictors racing ahead to aid in keeping the super capital and its escorts tackled. The dreadnoughts move was more complicated, the ships forced to jump to a mid point system to get in range of the fight and wait their jump reactivation timers while a secondary cynosural beacon was secured. Another problem cropped up as the system were the fighting was going on proved to be jammed, forcing Triumvirate. to use an adjacent system and lit the beacon on the connecting gate so as to allow the ships to jump through and take the gate immediately upon materializing.

All the while Triumvirate. forces were fighting to keep the super carrier tackled. The initial hostile combat carrier group warped off the grid only to warp back near the Stratios fleet with a force auxiliary in tow, a second one having remained where the original Rorqual was tackled. The ship made a slow approach to the site of the new battle but had 100 kilometers to cross. The Stratios fleet managed to tank the incoming damage well but as more and more combat carriers landed on the field decided to target their fighter squadrons. A swarm of drones met the fighters head on, tearing them apart one by one while the cruisers themselves used energy neutralizers, applying them to the Minokawa force auxiliary on the field. The Minokawa soon found itself struggling to activate its remote shield transfers as the Stratios fleet drained its capacitor dry.

Finally the first interdictors made it through and warped to the site, helping to secure the super carrier. With the interdictors in, the rest of the hostile capital force warped off with only two force auxiliaries getting caught by the interdictors. A few minutes later the dreadnoughts made it through as well. The slow ships took their time to warp to the field, landing near the super carrier. Once they exited warp, the dreadnoughts activated their siege cycles and blasted the Nyx with their combined firepower. Under the dreadnoughts’ bombardment the Nyx wilted and finally caved in, exploding in a bright flash and a surging sphere of flames which vanished after a few moments. The dreadnoughts then turned their guns on the Minokawa, sending it off to join the Nyx. 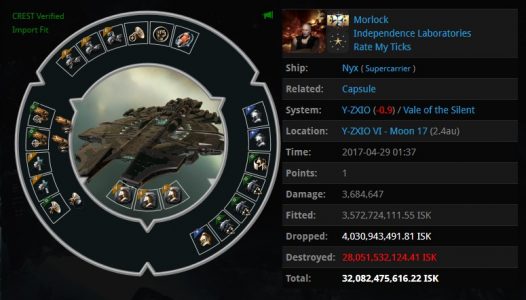 With the Nyx and Minokawa destroyed, the dreadnoughts waited patiently for their siege cycles to finish before jumping out and extracting safely. The Stratios fleet guarded their dreadnoughts, taking the time to loot the grid and destroy an Apostle force auxiliary which had been stranded far from the fighting thanks to an interdictors warp disruption probe. The cruisers had no trouble neutralizing the ship’s capacitor before methodically dismantling it. With the ship destroyed and the dreadnoughts safe, the fleet followed suit and departed thus bringing an end to the fighting.

Battle report for the Y-ZXIO system can be found here.

All told the battle lasted 45 minutes with Time Dilation not reported and the system hosting an estimated 70 pilots at the peak of the fighting.

Rate My Ticks lost 9 ships in the fighting including a super carrier, 2 force auxiliaries and 3 combat carriers for a total of 46.28 billion ISK damage.
Triumvirate. in comparison lost only 3 stealth bombers in total, reaching a 159 million ISK loss.