NS2L-4 system, Immensea region. On the 29th of March at 20:51 EVE Standard Time, a battle unfolded in the system resulting in the defeat of Phoenix Federation (PF) forces.

The battle was instigated by Pandemic Legion [-10.0] forces. The alliance had anchored a Raitaru engineering complex in the system of XVV-21 in order to provoke a fight. PF forces rose to the challenge, forming 300 pilots in order to destroy the structure once it reached its vulnerability phase. The 300 pilots were divided between a 210 pilot Machariel battleship fleet, a 40 pilot dreadnought wing and a 50 pilot Svipul tactical destroyer fleet.

The Machariel fleet entered the system first, setting up on the DY-P7Q gate, Pandemic Legion’s most probable point of entry. The fleet didn’t have to wait long for Pandemic Legion’s forces to arrive as a cynosural beacon lit up on the XVV-21 gate in DY-P7Q, heralding the arrival of the alliance. Pandemic Legion had brought a 120 pilot combat carrier fleet to the system, though several dreadnought squadrons within it remained behind as reserves.

The combat carriers approached the gate, with one combat carrier jumping through accidentally. The ship quickly found itself at the mercy of the Machariel fleet which proceeded to annihilate it. Attempts by force auxiliaries to jump through and save the stranded ship were too late. The rest of the Pandemic Legion fleet rushed through, deployed fighter squadrons and targeted the battleships. The swarm of fights descended upon the battleships which promptly burned away from the mass of capitals and warped off to safety, leaving only a few stragglers behind.

Once at range, the battleships targeted the vulnerable structure while friendly interdictors dove into the carrier formation, deploying warp disruption probe after warp disruption probe. This pinned the combat carriers to the gate, buying time for the Machariel fleet to focus on the engineering complex. The combat carriers retaliated, using their fighters to destroy the irritating interdictors but replacements soon arrived to continue the job. 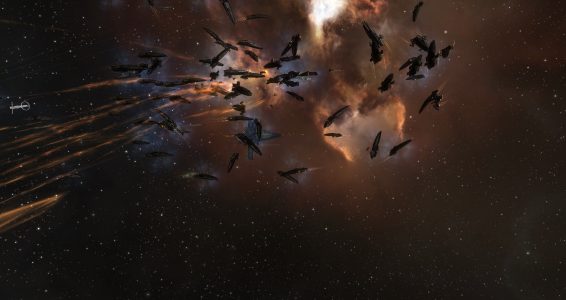 This allowed the Machariel fleet to destroy the structure and warp off to safety, leaving the combat carriers stranded on the gate. At that point more fleets arrived in the system. The first was the PF Svipul fleet which jumped straight into the combat carrier formation on the DY-P7Q gate. The tactical destroyers stood no chance against the hundreds of fighter squadrons deployed against them. The small destroyers tried to burn for freedom but many of them were instantly destroyed by dozens of vengeful fighters.

The second fleet to arrive was a 135 pilot Proteus strategic cruiser fleet belonging to Northern Coalition. [NC]. The fleet had come to support Pandemic Legion in its fight but with PF forces declining to engage the combat carriers had little to do. The force loitered in the system, setting up on a perch on the DY-P7Q gate.

The combat carriers, for their part, warped off the field once the cover of warp disruption probes had been dispelled by friendly stealth bombers. With the warp disruption probes gone, the entire carrier fleet warped to a tower in the system housing the system’s cynosural jammer and jump bridge. The combat carriers re-deployed fighter squadrons to incapacitate the structures, damaging PF’s infrastructure.

PF interdictors came to harass the combat carriers but were easily swatted by the combat carriers. At the same time the PF Machariel fleet decided to leave the safety of its citadel and attempt to fight the Northern Coalition. Proteus fleet. The battleships had scouts probe down the strategic cruisers before warping to the Proteus fleet. However, seeing the battleships warping in the direction of the gate, the Northern Coalition. fleet warped down to the gate itself, believing PF forces were making a run for it.

Finally, Pandemic Legion had incapacitated both the jammer and jump bridge and was preparing to extract its fleet, its commanders believing the fight would not happen. They would be proven wrong when PF forces made a mad dash for the NS2L-4 system. The fleet believed that engaging Pandemic Legion and Northern Coalition. in that system would allow it to deploy its dreadnoughts while keeping Pandemic Legion’s reserves out of the fight due to jump drive range limitations. The Machariels left their citadel once more and warped to the NS2L-4 gate, jumping in upon contact. 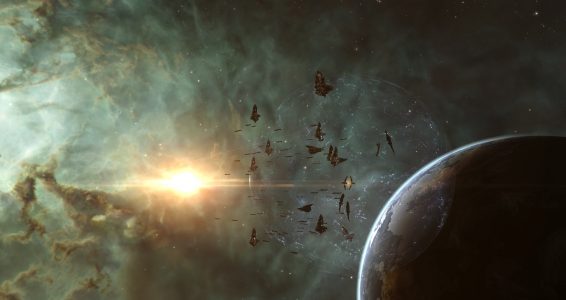 Northern Coalition. gave chase immediately while the combat carriers aligned towards the gate, waiting for their allies to secure tackle. The battleships uncloaked on the NS2L-4 side, anchored up and met the Proteus fleet head on. The Machariels’ autocannons ripped apart several of the strategic cruisers who focused fire on the battleships’ logistics wing. Guardian and Oneiros logistics cruisers were soon felled by the strategic cruisers’ return fire.

The battleship fleet itself attempted to pull range from the gate while the strategic cruisers gave chase, keeping the exchange at nearly point blank range. One of the Northern Coalition. strategic cruisers switched fleets mid fight and lit a cynosural beacon, allowing Pandemic Legion to enter the fray. The combat carriers materialized near the warring fleets and sent forth their fighters for a third time. The fighter squadrons swarmed the battleships, tearing them apart rapidly. At the same time, Pandemic Legion loaned a couple of its force auxiliaries to Northern Coalition. to aid its stressed logistics wing.

At that moment, PF commanders had a choice: Escalate things further or try to extract their fleet. A cynosural beacon had been secured on grid and the dreadnoughts were ready to jump in. In the end, the decision was made not to commit the dreadnoughts. With the Machariel fleet overwhelmed and XVV-21 losing its cynosural jammer, thus allowing Pandemic Legion reserves to jump next door and join the fray; it seemed like a bad idea. However the cynosural beacon had already been lit, alerting Pandemic Legion to the possibility. This caused Pandemic Legion fleet commanders to assign several combat carriers the duty of clearing any suspicious ship from the fleet’s vicinity.

The battle continued to rage, with PF forces losing battleships at increasing rate. The logistics wing of the Machariel fleet had been the main focus of the Proteus fleet, losing a great deal of its numbers in the ensuing fight. This meant the battleships who already bled numbers to the fighters, had no logistics capability whatsoever which led to increase in losses. The strategic cruisers themselves switched after a while from clearing logistics cruisers to targeting the battleships themselves, accelerating the rate of casualties.

The battleships found themselves unable to break through the armor of the strategic cruisers and with the combat carriers too far and supported by force auxiliaries, had no chance in inflicted damage there either. Instead the PF fleet focused on clearing tackle and extracting its forces, destroying countless interdictors, heavy interdictors and support fighters like the dreaded Siren which kept much of the fleet tackled. As the fleet burned nearly 150 kilometers off the gate towards freedom, it left a field of wrecks in its wake.

Finally, the survivors of the onslaught managed to break free, warping out and leaving stragglers behind to be destroyed by the pursuing strategic cruisers and swarms of fighters. With the Machariel fleet gone, the attackers started looting the field while preparing to extract. Once the strategic cruisers and combat carriers gorged themselves on the salvaged modules, the two fleets departed the system, extracting without incident and thus bringing an end to the fight.

Battle report for the NS2L-4 and XVV-21 systems can be found here.

All told the battle on its various parts lasted 46 minutes, with time dilation spiking randomly throughout, reaching upwards of 50% at times though quickly subsiding. XVV-21 saw 584 pilots before the bulk of hostilities commenced.