LBA-SO system, Immensea region. On the 16th of March at 16:33 EVE Standard Time, a battle unfolded in the system resulting in the destruction of a Revenant super carrier.

The battle was prompted by Half Massed [HMASS]. The alliance had a small gang roaming the region when it stumbled across an Asteria Concord. [ACORD] Rorqual industrial capital ship mining in an anomaly. The gang managed to tackle the ship and started shooting it. Local forces were quickly alerted to the Rorqual pilot’s plight and individuals started warping to the site in order to help extricate the ship. Half Massed was able to repulse many but quickly found it difficult to destroy the ship due to the size of the fleet.

The alliance contacted The Therapists [CURE] for help. The Therapists is a Curse region based alliance which along with other groups have been terrorizing the region ever since Phoenix Federation forces settled in it. The Therapists quickly organized a small force to aid Half Massed, bringing four super carriers including a Revenant, as well as a Thanatos carrier and a few black ops battleships. The alliance secured a cynosural beacon in an adjacent system on the LBA-SO gate. Once the force materialized on the gate it jumped through and warped towards the anomaly.

Once the super carriers landed, the combined firepower of the attackers was sufficient to dispose of most of the defenders which, at that point, included a second Rorqual, a Minokawa force auxiliary and a Nidhoggur carrier. The super carriers easily destroyed all the capital ships and prepared to extract, warping out and bouncing to safe spots in order to regenerate their capacitor for the jump back.

Initially, Phoenix Federation forces had been busy assembling a Ferox battlecruiser fleet. When reports came of the super carriers, the fleet quickly re-shipped to Machariel battleships with dreadnoughts told to log in and hold. The fleet then rushed to a waiting titan as a cynosural beacon was hastily procured in LBA-SO so as to allow the fleet to bridge in. However by the time the fleet managed to arrive in the system, the super carriers and most of the hostiles managed to escape the anomaly, leaving Phoenix Federation forces to destroy the few stragglers that were caught by local defenders, including the Thanatos.

The local populace wasn’t idle either. Scouts launched probes and with interdictors standing by started looking for the super carriers. The super carriers themselves prepared to jump out of the system, their exit beacon was supposed to be lit by then with their capacitors at appropriate levels. This led the super carriers to uncloak, however, a mishap caused a delay in the beacon lighting up. This allowed the scouts to probe down the Revenant and warp interdictors to it. As the Revenant pilot attempted to correct the issue, Phoenix Federation interdictors landed close by and started burning towards his ship.

By the time the cynosural beacon was lit, it was too late. The other super carriers managed to jump out successfully and the Revenant appeared poised to do the same. However in the last second one of the interdictors managed to launch a warp disruption probe whose edges caught the Revenant. This meant the ship was unable to jump, giving time for the other interdictors to burn in and secure their hold on the ship. With the ship pinned down, the Machariel fleet warped in and started applying damage to the behemoth, even lighting a cynosural beacon to let its dreadnought wing to jump through and expedite matters.

With two squadrons of dreadnoughts and a full battleship wing on top of it, the Revenant fell quickly. With the ship destroyed, Phoenix Federation looted the field and extracted its capitals, its fleet following suit. This marked the end of hostilities in the system. 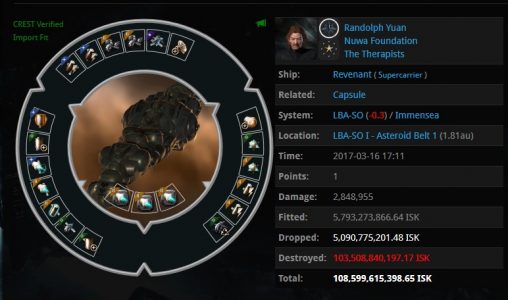 According to the owner of the Revenant, the ship itself is in the process of being replaced as he had placed an order for a Vendetta super carrier prior to the events of LBA-SO.

Battle report for the LBA-SO system can be found here.

All told the battle lasted 37 minutes with no Time Dilation reported. The system held 146 pilots near the end of the fighting.