Curse: Circle-Of-Two and Pandemic Legion Tangle in a Bizarre Fight

Curse region. On the 14th of March at 19:47 EVE Standard Time, a bizarre battle unfolded in the region involving Pandemic Legion [-10.0] and Circle-Of-Two [CO2].

The battle was instigated by Pandemic Legion. The alliance had reinforced a Fortizar citadel belonging to Circle-Of-Two in the adjacent region of Derelik. The citadel located in the Sendaya system was exiting its last reinforcement timer. Circle-Of-Two attempted to defend it. The alliance had drawn 320 pilots for the structure’s defense. The pilots divided between a full (256 pilot) Proteus strategic cruiser fleet and a Jackdaw tactical destroyer fleet. The force traveled to the system through the Curse region to reach its destination.

In the meantime, the Fortizar had exited its invulnerability phase and was vulnerable to attack. A Pandemic Legion dreadnought squadron supported by local Pandemic Legion affiliated forces, such as RekkingCrew, attacked the structure. The citadel languished a while under the combined firepower on the field before caving in and exploding, thus securing the strategic objective for Pandemic Legion.

With the citadel destroyed, Pandemic Legion started to take down its mobile warp disruption fields and halted their deployment of new warp disruption probes. This was done to allow the fleet to withdraw as Pandemic Legion fleet commanders did not believe Circle-Of-Two forces would engage them due to losing the objective and the firepower advantage Pandemic Legion possessed. This assumption proved to be false as the Circle-Of-Two Proteus fleet used the opportunity to warp to the Sendaya gate and jump through. Fearing the fleet was planning to snag the lightly defended dreadnoughts on the Fortizar’s wreck, Pandemic Legion jumped after the Proteus fleet.

Pandemic Legion reacted, bringing two titans to the field in an attempt to use their boson field generator to wipe the whole fleet. Pandemic Legion stealth bomber squads also started carrying out bombing runs, decimating the Jackdaw fleet in the process. The rest of the Pandemic Legion fleet jumped in and deployed its fighters, hitting the strategic cruisers. Against this combined onslaught the Proteus fleet was helpless. After taking heavy casualties the Proteus fleet disengaged and started heading back to its staging system. 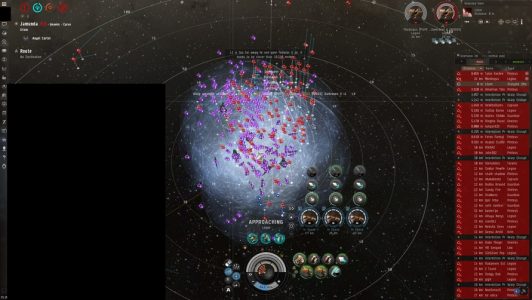 Not content to let it go, Pandemic Legion jumped its entire capital fleet to the system of Jamunda. The carrier fleet landed on the Litom gate to intercept the Proteus fleet. As the Proteus fleet made its way back to its staging it encountered the carrier fleet and once again suffered casualties and the carriers attempted to dispose of as many strategic cruisers as they could tackle. The majority of the fleet however made it back to the gate and jumped through to Litom, anchoring on the other side. Pandemic Legion soon followed suit and the battle resumed in earnest in the Litom side.

The strategic cruisers started burning away from the gate only to be swarmed by hundreds of fighters. The fighters exacted a heavy toll on the strategic cruisers while Pandemic Legion interdictors raced to keep as much of the fleet tackled. Circle-Of-Two did its best to clear tackle and warp off to safety, seeking refuge in one of the system’s stations. Warping to the Litom III – Salvation Angels Trading Post station, the Proteus fleet was greeted by more Pandemic Legion titans who once again bathed the strategic cruisers with boson field generators. The cones of energy damaged many ships though inflicted few casualties. The fleet promptly docked up.

This did not mark the end of the fight. Pandemic Legion’s fleet moved to the undock ramp to wait for the Proteus fleet to leave the station. Due to the station’s peculiarity the undock ramp launches ships away from its rather short docking ring. This means any ship leaving the station would be unable to quickly dock up again. Circle-Of-Two were quickly confronted with this reality as a few ships attempted to leave the station only to find the Pandemic Legion fleet camping the exit. The few strategic cruisers were dispatched with ease but soon the entire Proteus fleet left the station en-mass and attempted to warp away to the Jamunda gate.

Pandemic Legion was not about to let it happen and had its interdictors cover the entire fleet in a thick layer of warp disruption probes. The carriers then sent forth their fighter squadrons. Strategic cruisers were felled in increasing numbers as the Circle-Of-Two fleet attempted to clear the warp disruption fields. Finally, after taking more losses the strategic cruisers broke free of the cover and warped out. Once they landed on the Jamunda gate they jumped out, hoping for freedom. 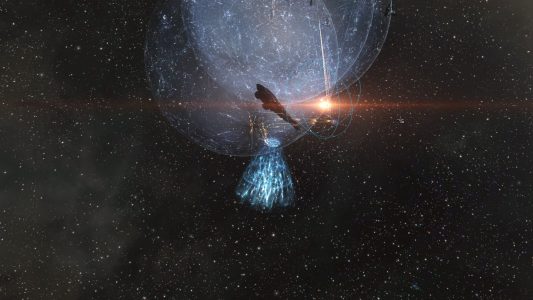 Pandemic Legion had no intention of standing down. Once again, the carrier fleet jumped next door, materializing on the Litom gate in Jamunda to welcome the fleeing strategic cruisers. Confronted by the carrier fleet again, the survivors of the previous clashes just burnt out in an attempt to save themselves. Many were destroyed but half the fleet managed to escape. Pandemic Legion did not pursue this time, instead dispatching the few stragglers that remained before extracting its fleet. Thus the battle finally came to an end.

Battle report can be found here.

All told, the battle lasted an hour and 37 minutes with no Time Dilation reported. Final estimates of the number of pilots which participated in the battle are believed to be around 470 in total.