9-F0B2 system, Providence region. On the 13th of March at 18:47 EVE Standard Time, a battle unfolded over a tower in the system.

The battle was instigated by Mercenary Coalition [MC]. The alliance had reinforced several towers in the Providence region, one of them exiting its invulnerability mode that night. However Mercenary Coalition had no wish to contest the timer, opting instead to roam the region for some smaller scale PvP.

Originally forming a Confessor tactical destroyer gang, the Mercenary Coalition fleet commanders quickly changed their plans once scouts reported on the repair efforts in the system. Providence Bloc formed a small Hurricane battlecruiser fleet to guard the tower as it exited its reinforcement mode and brought six force auxiliaries to restore its weakened shields.

As it turned out, those force auxiliaries were part of a Providence Bloc capital force. The force had been assembled to drop on a Test Alliance Please Ignore [TEST] super carrier which was moving in the vicinity of the region. However the target managed to elude the capital fleet, and seeing the tower exit reinforcement mode with Mercenary Coalition not forming to destroy it, decided to lend a hand and speed up the grueling repair process. With the force auxiliaries dropped on by the Mercenary Coalition fleet, the Providence Bloc capital force responded in kind, jumping its dreadnoughts and carriers into the fray. 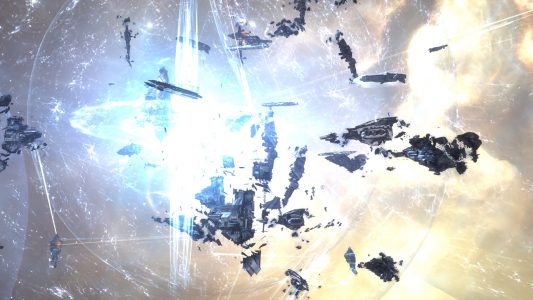 The battle turned into a capital brawl as both sides brought more and more dreadnoughts to the field. Providence Bloc in particular kept bringing in waves of capital ships, jumping them straight into the melee. The two sides kept battering each other at close range which resulted in a constant stream of losses. The trade in dreadnoughts remained even throughout the exchange, with Providence Bloc managing to gain advantage in the end by sheer force of numbers.

In the sub capital exchange, Mercenary Coalition achieved dominance early on. With an Apostle force auxiliary to use as a logistics wing, the strategic cruisers were able to shrug the Hurricane fleet’s damage output and tear into it. Volley after volley saw Hurricanes and supporting Caracal cruisers destroyed, leading to the fleet becoming defunct by the end of the fighting.

And yet with the capital brawl nearly won by Providence Bloc, the Proteus fleet found itself in trouble. The Apostle force auxiliary was quickly destroyed, leaving the strategic cruisers exposed. With no ability to repair the damage, Proteus and Legion strategic cruisers started to drop. The Proteus fleet was still able to repay its attackers, inflicting more losses on the Hurricane fleet but moving to withdraw.

With the last Mercenary Coalition dreadnoughts destroyed, the Proteus fleet made a fighting retreat from the system, withdrawing back to its staging system and allowing Providence Bloc to hold the field. 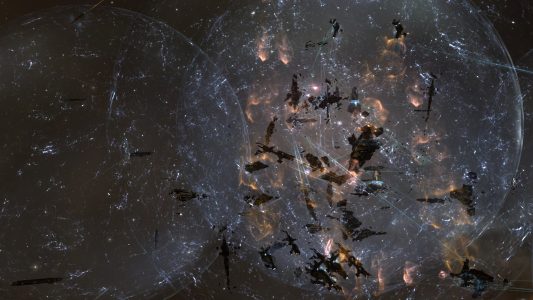 Both sides knew that the fighting was far from over. Mercenary Coalition seized on the opportunity and re-formed its fleet, switching to a full Machariel battleship fleet with a Ninazu force auxiliary to serve as its logistics backbone. Providence Bloc wasn’t idle either and formed a Nightmare battleship fleet while hastily extracting its surviving capital ships.

The Nightmare fleet attempted to keep range from the Machariels but after a command destroyer managed to teleport a segment of the fleet near the Machariels, chose to dive in. The Machariels took the opportunity to destroy the battleships who were too far from their logistics wing.

The Nightmare fleet burned into close range distance and continued to focus on the Machariels, who fired back. The autocannon fit Machariels were still unable to break the tank of the Nightmare battleships, whose logistics wing proved too strong to contend with. The Nightmares in contrast had no trouble burning through the ranks of the Machariel fleet, taking down battleship after battleship even as the Ninazu did its best to keep its comrades alive.

Realizing the predicament they were in, Mercenary Coalition fleet commanders decided to withdraw, clearing tackle and preparing to warp out. Providence Bloc, feeling secure in its advantage, decided to put the final nail in the coffin and brought a titan to the battle at long range. The titan cycled its doomsday device, hitting the Ninazu for full damage and obliterating the ship. With the force auxiliary gone, Mercenary Coalition had no hope of tanking the incoming damage and simply warped out, leaving Providence Bloc in control of the grid.

This proved the final battle over the tower, with Providence Bloc forces able to repair it without further interference. With the tower secured and the field won, Providence Bloc extracted as well, bringing an end to the fighting.

Battle report for the 9-F0B2 system can be found here.