1P-WGB system, Catch region. In the early hours of the 4th of March, a large capital battle unfolded in the system over a Pandemic Legion [-10.0] citadel.

The battle was fought over a Pandemic Legion Astrahus citadel. The structure was deployed by the alliance to provoke a fight from local residents.

To defend the structure, Pandemic Legion assembled a 160 pilot combat carrier fleet with force auxiliaries serving as its logistics wing. The fleet also held a dreadnought wing in reserve in case of an escalation. Besides Pandemic Legion, Northern Coalition. [NC] was also notified of the event and brought further reinforcements in the form of a 140 pilot Proteus strategic cruiser fleet. Northern Coalition. had its own dreadnought wing in range, adding to the total dreadnought numbers of the defenders.

Against this, a coalition formed up to take down the structure. Test Alliance Please Ignore [TEST], Circle-Of-Two [CO2], DRONE WALKERS [WALKA], Brave Collective [BRAVE], Tactical Supremacy [TIKLE] and Dangerous Voltage [DV] came together with Vanguard (VG) and Phoenix Federation (PF) coalitions comprising a formidable armada to contend with Pandemic Legion. Between them they had 800 pilots in sub capitals alone split between a Nightmare battleship fleet, a Hurricane battlecruiser fleet, 2 Tengu strategic cruiser fleets, a Proteus fleet, a Gila cruiser fleet and a Harpy assault frigate fleet.

With the citadel set to online around 1:00 EVE Standard Time, both sides were ready for a major clash.

Pandemic Legion arrived first in the system, jumping its carrier fleet on the Astrahus and setting up on the structure. The attackers filtered in one by one, either via gates or titan bridge. Fleet after fleet arrived, warped to the Astrahus at varying ranges and started engaging the carrier force which retaliated, sending fighter squadrons after the aggressors.

A skirmish developed as Pandemic Legion interdictors did their best to snare hostile fleets for the fighters to decimate. The attackers on the other hand attempted to clear as many fighters and tacklers from the field, destroying or damaging many of the drones before being forced to warp off. This was mainly due to the swarm of fighters catching up with the fleet formations and devouring mainline ships.

All the while Northern Coalition. waited with its Proteus fleet in range of the battle, prepared to bridge in.

The first to suffer major losses was the PF Tengu fleet. The fleet warped in range of the carriers but got snagged by a warp disruption probe, landing perilously close to mass of capitals. Attempting to burn away and warp off, a mistake by one of its pilot led to part of the fleet being unable to warp off due to a deployed warp disruption field. This allowed Pandemic Legion’s fighters to descend on the Tengu fleet. Within minutes, 15 strategic cruisers and Scimitar logistics cruisers were destroyed, representing 10% of the total fleet.

Immediately, the Proteus fleet opened fire, targeting the Nightmare fleet’s support squadron. Weakened by the bomb damage, the Huginn force recon cruisers were swiftly dispatched, followed by the battleships themselves as Pandemic Legion and Northern Coalition. focused their firepower on the Nightmare fleet. This forced the Nightmare fleet to warp off, leaving those caught behind to fend for themselves. Most of them were quickly destroyed. 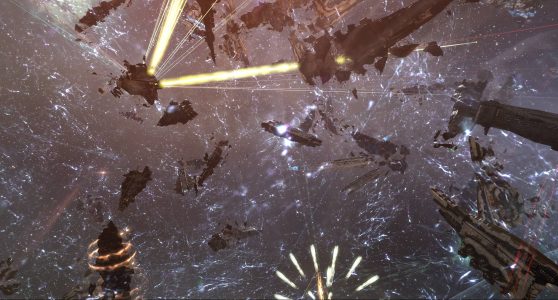 By that point, Pandemic Legion and Northern Coalition. were in control of the battle. The attackers were forced to switch their focus to the structure which had finished its anchoring phase and attempted to online. They managed to catch the structure just as it was ready to online, pausing it at the last second. Still, the attackers had no real counter to the carrier fleet and its Proteus support.

In a quick conversation, the attacking coalition decided to commit capitals to the fight in order to gain the upper hand. Across alliances and coalitions 70 dreadnoughts were mustered with 20 combat carriers to serve as space superiority platforms to counter the Pandemic Legion fighter squadrons. The force was quickly assembled and a cynosural beacon secured on top of the Pandemic Legion carrier formation. The beacon lit up, allowing the dreadnoughts to jump in. A secondary beacon was lit away from the mass of capitals to usher in the carriers.

The battle quickly deteriorated into a capital brawl with the sub capitals fleets almost an afterthought in the unfolding carnage. Dreadnoughts started exchanging blows. On either side losses mounted as capital ships were brought down by the immense firepower present. Back and forth dreadnoughts were traded, sub capital fleets and fighter squadrons rushing in to assist their own.

The Pandemic Legion carrier fleet started applying energy neutralizers to the hostile dreadnoughts in the hopes of silencing their guns. Moros and Revelation dreadnoughts were targeted due to their high capacitor dependency. Many dreadnoughts equipped with the capital emergency hull energizer module sought to prolong their lives, often serving as damage sponges for enemy dreadnought fire due to the short period of invulnerability they conferred on the hull. These dreadnoughts though would rarely survive the fight as the sub capital fleets would finish the job their capital brethren started.

The capital exchange between the two sides kept an even pace. Dreadnoughts on either side were quickly disposed leading to a string of ever increasing losses. Pandemic Legion itself was losing many fighter squadrons to the hostile carriers forcing it to deploy its own space superiority fighters in order to counter them. Northern Coalition.’s Proteus fleet in the meantime busied itself with chasing the Gila fleet. The Gilas managed to inflict some losses on the Northern Coalition’s logistics wing, forcing the Proteus fleet to focus on them.

The cruisers’ flight path took the fleet near a wreck where a warp disruption probe was still deployed. This gave an easy warp in for the Proteus fleet which landed only 20 kilometers away from the Gilas. The cruisers were caught by surprise, their anchor and fleet commander snagged first, causing the entire fleet to halt. Northern Coalition. took advantage of the fact and proceeded to massacre the Gila fleet, only a part of it managing to escape.

With the battle already reaching the one hour mark, things began to slow down. The hostile fleets had been concentrating some of their firepower on the Astrahus, chipping away at its health. The dreadnought exchange itself was still in full swing but an outcome was emerging, one that did not favor the attackers. The trade off became more and more lopsided with Pandemic Legion and Northern Coalition. inflicting more casualties than receiving.

Having won the objective, the attackers started thinking of extraction. All the attacking fleets had incurred major losses, and with the dreadnought exchange heading towards a loss, the time came to retreat. Whats more, Goonswarm Federation [CONDI] were spotted en-route to the system. With Pandemic Legion and Goonswarm Federation having worked together in the previous fight, the attackers were certain they did not come to help them.

The carrier force was extracted and those dreadnoughts that were out of siege with sufficient capacitor jumped out. The remaining sub capital fleets warped out to safety, finding refuge in friendly citadels across the system. Others started the long trek back home, leaving Pandemic Legion and Northern Coalition. in control of the grid.

The victors attempted to snare as many of their departing enemies as they could. They then set about clearing the field of any remaining hostiles before securing their own extraction. Looting the field and gathering scattered fighter squadrons, the two allies waited for their last force auxiliaries and dreadnoughts to exit their respective triage and siege cycles before jumping their entire capital force out. The Proteus fleet followed suit, exiting the system and bringing an end to the fight.

The Battle from the Perspective of the Vanguard Coalition Tengu Fleet

Pandemic Legion lost the citadel though achieved its objective of provoking a fight. Together with Northern Coalition. it was able to hold the field. The attackers however managed to complete their objective and even hold their own in a capital exchange with the two alliances, with some fleet commanders speculating that had the dreadnought mass been more equal, the fight could have gone either way. Goonswarm Federation forces never did enter the fray, though were the final decider in breaking the fight.

Battle report for the 1P-WGB system can be found here.

All told, the battle lasted 90 minutes with Time Dilation reported between 20% to 40% throughout the battle. The system reportedly held 1,250 players at one point in the fight.

The defenders lost a combined 127 ships, including 49 dreadnoughts, 1 force auxiliary and 2 strategic cruisers for a total of 162.88 billion ISK damage.