The Story Behind the First Vendetta Loss

8RQJ-2 system, Delve region. On the 1st of March at 4:36 EVE Standard Time, the first Vendetta super carrier was destroyed by Pandemic Legion [-10.0], marking another historic event in the annals of New Eden.

According to Dancul1001, who orchestrated the operation, the ship in question came to the attention of Pandemic Legion after an unknown individual contacted the alliance and placed a contract for its destruction. With the ship and pilot known, belonging to Goonswarm Federation [CONDI], it didn’t take long for Pandemic Legion to find out its whereabouts. After confirming the ship’s activity in 8EQJ-2, Pandemic Legion started setting up the trap.

Dreadnoughts were bought and brought to a system in proximity of the region, though not close enough to alert Goonswarm Federation and its allies. Scouts in the meantime kept on the lookout to secure a wormhole chain to allow a fleet to enter the system. A pilot was planted in KarmaFleet, Goonswarm Federation’s new player friendly corporation to secure the initial tackle and furnished with the skills to fly a heavy interdictor. With everything set, all Pandemic Legion had to do is wait for an opportunity.

It came in the early hours of the 1st of March. Pandemic Legion scouts managed to map a wormhole route to the system and a Talos battlecruiser fleet was assembled to take part in the operation. The Talos battlecruisers are known for their close range, high damage output and low mass, making them ideal for hit and run attacks. At the same time, the dreadnought cache was activated with ships handed out to pilots and the entire force setting out, moving in range of the system. The planted character, FierySoul, was logged in. The pilot was used to scout the target. After confirming the target was indeed online and active, running anomalies, FierySoul docked up, switched to a heavy interdictor fitted with a cynosural beacon and returned.

In the system, the pilot used his directional scan to find the Vendetta. Once he confirmed the site the ship was in, the heavy interdictor warped in, finding the Vendetta sitting in the site not aligned or moving at all. Taking advantage, the heavy interdictor tackled the ship, lit a cynosural beacon and allowed the Pandemic Legion dreadnoughts to jump in and kill the ship. Meanwhile, the Talos fleet traveled through the wormhole chain and entered the system, warped to the site to supply secondary tackle as well as damage.

The Vendetta pilot realized the danger and attempted to remove the tackle, easily destroying the FierySoul heavy interdictor who was immobilized due to lighting the cynosural beacon. However by then the Talos fleet had landed and its own interdictors and heavy interdictors sealed its fate. It lit a cynosural beacon to bring in reinforcements managing to bring in two Apostle force auxiliaries. However with the number of dreadnoughts on the field the force auxiliaries were completely ignored, with the focus remaining on the Vendetta. 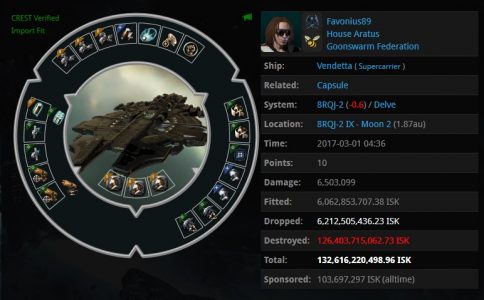 With the battlecruisers and dreadnoughts hammering it, the ship went down fast, the Pandemic Legion dreadnoughts needing only one siege cycle to dispatch it. With the ship destroyed, Pandemic Legion quickly removed the two force auxiliaries before extracting its dreadnoughts while looting the ships. The Talos fleet then warped to a Rorqual industrial capital ship in the system which had also lit a cynosural beacon. The pilot thought the hostile fleet was there for him and lit the cynosural beacon for reinforcements while activating his pulse activated nexus invulnerability core. The Talos fleet found him after his invulnerability period wore off and destroyed it, adding another casualty to the list. With the Rorqual destroyed and Goonswarm Federation forces undoubtedly on the way, the Talos fleet made its escape safely through the wormhole.

The loss itself has been valued at 132 billion ISK as the ship was only introduced the previous year and so far been produced in small numbers. While this is the first Vendetta to be destroyed, it is certain that more would be lost in the future as its circulation grows.

Pandemic Legion has withheld the identity of their contractor.