Catch: A Tale of Two Titans in 36N-HZ

36N-HZ system, Catch region. On the 11th of January at 2:57 EVE Standard Time, a battle unfolded in the system over the fate of a Leviathan titan.

The titan in question belonged to Test Alliance Please Ignore [TEST] and was caught warping to a tower from a citadel. Test Alliance Please Ignore as part of the Stain Fraggin (SF) coalition had gained a foothold in the system, even acquiring a Fortizar citadel to use as a forward base. Thus, the alliance was busy moving ships and materials, as well as deploying super capital assets for use in its current invasion of the Catch region.

However, local forces belonging to Stain Wagon (SW) coalition took to camping the tower. With the use of interdictors, the locals would place warp disruption probes between the citadel and the tower, catching unwary travelers and dispatching them. Test Alliance Please Ignore was quickly alerted to this, and sent a warning to all its pilots about the tower. The pilot of the Leviathan hadn’t apparently read that message.

Deploying to the system, the pilot piggybacked a ride on a cynosural beacon already lit on the citadel and jumped in. Once materialized in the system, the pilot planned to log off the titan until needed. While super capitals cannot dock in a Fortizar citadel, they are practically safe due to the robust defenses of the structure compared to its smaller cousin. However the player was a veteran who had returned to the game only a few months prior. In his mind, the only safe place for a titan to log off would be a tower. Thus the pilot set a course to the tower in the system, engaging the ship’s warp drive.

The enormous ship entered the warp tunnel, hurtling towards the tower. Upon exiting warp though, the pilot didn’t find himself in the safety of the tower’s shields, but instead at the edge of a warp disruption probe. The SW pilots were caught by surprise, but overcame it, quickly securing tackle on the giant while calling for reinforcements. Interdictors and heavy interdictors left citadels and stations en-mass, burning towards the system in order to keep the titan pinned down while Goonswarm Federation [CONDI], SW’s ally, hastily formed a Proteus strategic cruiser fleet to help.

The Leviathan pilot, caught in an increasing cover of warp disruption probes and too far from the tower to slowly plow towards it, immediately informed the alliance of his predicament and calmly waited for reinforcements. Test Alliance Please Ignore wasted no time in forming a Hurricane battlecruiser fleet while informing its myriad of allies of the situation. Circle-Of-Two [CO2] formed a Proteus fleet to aid its ally, while Mercenary Coalition [MC] assembled a Cerberus heavy assault cruiser fleet. Other allies staged away further burnt in supporting fleets such as Svipul tactical destroyers to deal with tackle.

Both sides were frantic. Since the system was far from the two’s staging systems but in range of a titan’s jump portal array, fast ships fitted with cynosural beacons were sent ahead to allow the fleets to bridge in. Five minutes since the moment the titan had been caught by SW forces, a cynosural beacon lit up near the captive ship. Into the field bridged the Goonswarm Federation Proteus fleet. Goonswarm Federation set to the task of securing the catch, its interdictors and heavy interdictors making sure the ship was pinned on the grid. At the same time, a dreadnought squadron was organized, as well as a super capital fleet arranged in order to destroy the ship.

However, before Goonswarm Federation could realize its plan, Test Alliance Please Ignore managed to bridge into the system, coming to the aid of the titan. A battle began on top of the tackled behemoth as Goonswarm Federation and Test Alliance Please Ignore clashed over its fate. SF fleets poured in as well as the two sides squared off. A murderous exchange took place as the two sides fought at point blank range, mainline ships overwhelmed by the sheer firepower fielded by each fleet.

Test Alliance Please Ignore directed most of its firepower on clearing tackle, its Hurricanes making short work of the heavy interdictors while anti tackle ships hunted down the interdictors. For a moment, the titan was free, clear of interdiction probes and focused warp disruption fields. Yet, the titan could not warp. Goonswarm Federation, realizing the Hurricane fleet’s plan, had its strategic cruisers apply their warp scramblers to the behemoth. The sheer number of warp scramblers was able to overcome the mighty warp drive of the titan, nullifying it and keeping the ship stranded.

Realizing this, Test Alliance Please Ignore started bombarding the strategic cruisers, both sides receiving a continuous stream of reinforcements. Back and forth the battle raged. Strategic cruisers exploded under a constant barrage of artillery shells, but kept returning fire and destroying battlecruisers in return. The trade off proved rather even as the fight gathered pace.

It was at this point that disaster struck for Goonswarm Federation. Intending to bridge in reinforcements, a Ragnarok titan made a mistake and instead jumped into a cynosural beacon lit on the field. The behemoth landed on the grid, in the midst of the fighting. Both sides were surprised, and the Ragnarok managed to warp off the field to a planet to try and set a safe spot to hide. Test Alliance Please Ignore interdictors soon followed it, managing to tackle it and keep it pinned with the aid of Northern Coalition. [NC] reinforcements. Each side had at that point a titan tackled.

The fight remained intense on the tackled Leviathan. With its own titan tackled in the system, Goonswarm Federation decided to hurry things. Instead of waiting for its formidable super capital fleet to get in range of the system, the alliance chose to drop a squadron of dreadnoughts in order to quickly destroy the titan and free its Proteus fleet to rescue its own titan. The dreadnoughts entered the field, materializing on grid and entered their siege cycles. Test Alliance Please Ignore had by that time jumped in several force auxiliaries to keep the titan alive, and those ships became the first targets of the dreadnoughts. One after the other the capital ships were destroyed, the dreadnoughts focusing their immense firepower to quickly remove them from play.

With the force auxiliaries gone, the titan’s turn came. The titan itself overheated his shield resistance hardeners, but against the number of dreadnoughts it was only a matter of time before the Leviathan’s shields would falter and the ship cave in to the onslaught. At this point, Test Alliance Please Ignore committed the third mistake in the entire affair. The alliance had organized its own dreadnought squadron in order to destroy the Goonswarm Federation titan. The group was cleared to jump in, but jumped to the wrong beacon, landing on top of its own titan instead. With the field once again covered in warp disruption probes, there was no way for the dreadnoughts to change locations.

Thus, Test Alliance Please Ignore committed its dreadnoughts, having them enter their siege cycles and target the hostile capitals. A capital brawl ensued, with the titan joining in, resigned to its fight but making sure it went down with an enemy or two. Firing its doomsday device, the Leviathan obliterated one of the Goonswarm Federation dreadnoughts while committing its mounted missile launchers to the fight.

Losing capitals, the Goonswarm Federation fleet had just about enough. With the super capital fleet finally ready and in range, the entire fleet was given the go ahead signal. Within moments, no less than 50 super carriers and titans hit the grid, spreading across the field as more ships jumped in. The Goonswarm Federation titans activated their doomsday devices, targeting the hostile Leviathan. A dozen beams of light touched the behemoth, lighting the grid in bright colors. Once the beams dissipated the Leviathan grew ominously silent, with small explosions spreading on its skin like a rash. The fires quickly spread to the length and breadth of the ship, crisscrossing its skin before the entire structure suddently ruptured. A giant concentric ring of fire spread from the ship, vanishing a few moments later and leaving behind it cooling wreckage. 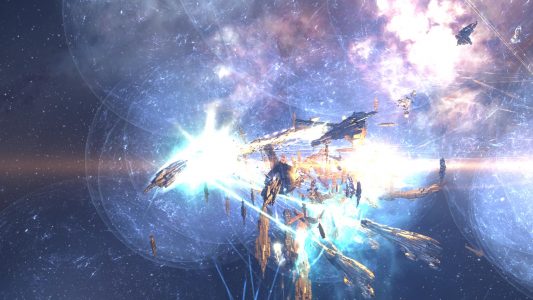 The Goonswarm Federation armada, its primary goal achieved, was however stranded on the grid by the continued effort of SF interdictors to keep it on the field. The SF fleets, including the Hurricane fleet, had withdrawn to the Ragnarok’s location as the Goonswarm Federation capitals and super capitals hit the grid. The SF fleets landed on top of the beast, the hundreds of cruisers and battlecruisers firing relentlessly at the behemoth. Missiles, lasers, super heated plasma and artillery shells all were thrown at the Ragnarok’s shields. The relentless fire slowly ate at the shields, the thousands of blasts finally overcoming it and the munitions started to fall on the exposed hull. Within minutes, the ship had been thoroughly ravaged by the SF forces. After languishing under the determined attacks of the sub capitals, the titan caved in, exploding in a bright flash no less spectacular than its hostile brethren before it.

With the two titans destroyed, the opposing sides halted. Each was in control of a different grid, and none wished to warp to the other and resume the fight. After a 30 minute stand off, neither side moving, the myriad fleets decided to call off hostilities and extract. One after the other, the different fleets filed out of the system, bringing the fight to a close.

Battle report for the 36N-HZ system can be found here.

The battle lasted 70 minutes with Time Dilation reaching 10% and the system hosting 1,100 players at the peak of the fighting.

Salivan Harddin is a member of V0LTA, WE FORM V0LTA, and covers news across New Eden