Geminate: Stream Sniping Attempt Leads to a Titan Loss and a Running Battle in BWF-ZZ

BWF-ZZ system, Geminate region. On the 31st of October at 19:00 EVE Standard Time, an Erebus class titan belonging to Legion of xXDEATHXx [X.I.X] was destroyed in the system, sparking a running battle between its attackers and local forces led by Legion of xXDEATHXx.

The entire chain of events was sparked after Legion of xXDEATHXx “Stream Sniped” Bjorn Bee in the system. The act of “Stream Sniping” is that of crashing roams or activities held by individuals who often use twitch.tv to broadcast their activities. Often just another way to grief players, with the explosion in popularity of the platform, more and more streamers have started showing up in New Eden, prompting many to hunt them and making the phenomena widespread.

One such streamer is Bjorn Bee, who has garnered quite a following in the last year. After repeated incidents around BWF-ZZ where Legion of xXDEATHXx forces chose to bring capitals and super carriers to crash his roams, Project.Mayhem. [16-13], backed by Snuffed Out [B B C] reached out to the streamer, seeing an opportunity to perhaps bait Legion of xXDEATHXx super capitals.

The plan was simple, have Bjorn Bee stream his usual roam and once again visit BWF-ZZ system, this time flying a capital, thus presenting a juicy target for Legion of xXDEATHXx to drop on. With BWF-ZZ system serving as the alliance and the Drone Regions Federation (DRF)’s main staging system, Legion of xXDEATHXx pilots would feel comfortable employing their super capitals, as they’ve shown before.

As Bjorn Bee took out a Moros dreadnought supplied to him by Project.Mayhem. and entered the system with a small sub capital escort through the Oijanen system in The Forge region, Snuffed Out and Porject.Mayhem. prepared their own fleet, assembling a 110 pilot Proteus strategic cruiser fleet with a moderate dreadnought squadron and moving it to a titan in range of Oijanen. Once in place, the fleet logged off so as not to alert Legion of xXDEATHXx to the trap.

Bjorn Bee and his small gang set up in the meantime on the Oijanen gate in BWF-ZZ and waited for Legion of xXDEATHXx to respond. They didn’t have to wait long before an Erebus titan warped to a ping above the gate and without delay fired its doomsday weapon, targeting Bjorn Bee’s dreadnought. Even as he overheated his hardeners, Bjorn Bee stood no chance. The collapsed micro black hole, contained and discharged as a singular beam of energy, hit the Moros head on. It passed through it, ignoring its shields, armor plates and superstructure, leaving behind a circular tunnel which quickly disintegrated as the ship convulsed before gripped in a massive explosion caused by the wake of the beam.

However, as the Moros breathed its last, interdictors prepared ahead of time in the system probed down the Erebus and warped in, landing on top of the giant and deploying their warp disruption probes thus tackling it. Swiftly, the Snuffed Out\Project.Mayhem. fleet logged back in and bridged on the BWF-ZZ gate in Oijanen, jumped in and warped to a ping above the gate, before finally warping on top of the tackled titan.

As the strategic cruisers landed they opened fire, unleashing laser beams and super heated plasma charges on the stranded titan. After them came the dreadnought, each entering siege cycle and firing capital munitions at the behemoth at close range. Explosive shells and frigate sized missiles detonated against the thick armor of the Erebus, gauging deep craters in its skin. Volley after volley chipped away at the giant, its demise seeming all but certain.

In a last ditch effort to prolong its life, the titan ejected a Nestor battleship in order to refit and buy more time for the rescue fleet which was forming at the time to arrive and save it. A known trick, as the Nestor, even unpiloted has more raw HP than a regular mobile depot, it failed as the Nestor was easily removed from the field, leaving the titan stranded mid fit. With its last hope gone, the titan gave in, the enormous artillery shells and missiles penetrating its hull and wreaking havoc inside. Within moments, the beast broke apart as internal systems gave in and reactors melted down and unleashed their contained energy throughout the hull. A series of explosions rocked the Erebus as entire sections of the ship were flung away into space. Those unlucky to be near the behemoth at its moment of death were washed by the energy unleashed in its dying breath, stripping shields and scorching armor plates.

The Titan’s Demise as Seen from Bjorn Bee’s Perspective 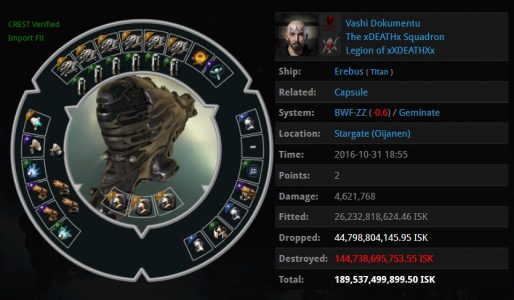 With the titan destroyed, Snuffed Out\Project.Mayhem. looted the wreck and waited for its dreadnoughts to exit their siege mode and warp off to a safe tower which had been set up in advance for the operation. By then though, Legion of xXDEATHXx and its allies had formed their own Proteus fleet of an estimated equal size to the Snuffed Out\Porject.Mayhem. one. The fleet un-docked from the station and warped to the remains of its titan, bent on exacting revenge on the transgressors.

The two fleets collided over the wreck of the titan, the Snuffed Out\Project.Mayhem. fleet attempting to safeguard its capitals as they attempted to warp off the field while the DRF sought to keep them tackled, exchanging all the while fire with its hostile counterpart. The two Proteus fleets traded blows, but it became quite apparent that the DRF fleet was unable to tank the incoming damage. Un-docking with few logistics cruisers, the Snuffed Out\Project.Mayhem. fleet managed to volley what little Guardian logistics cruisers it did possess, leaving it defenseless. With its logistics wing decimated, the DRF strategic cruisers were unable to tank the incoming fire and many started giving in to the concentrated fire volleys thrown at them by Snuffed Out\Project.Mayhem.. Yet even with their losses mounting, the DRF fleet proved tenacious, remaining on grid and keeping tackle on 7 dreadnoughts.

Seeing the resolve of the DRF fleet and its increasing numbers as more and more ships joined in, the Snuffed Out\Project.Mayhem. fleet commanders had no choice but to retreat to the safety of their tower or risk getting their entire fleet trapped. Warping out, the strategic cruisers left the tackled dreadnoughts to their fate. One by one, the capitals were torn apart by the avenging DRF forces who continued to swell the ranks of their fleet.

Realizing that remaining in the tower would only lead to the entire fleet being camped in by the DRF, Snuffed Out\Project.Mayhem. kept scanning the Oijanen gate, waiting for the warp disruption probes to burn out. Seeing their scanners registering the gate as clear of interdiction probes, the fleet made a break for it, warping its capitals first, then its Proteus fleet. The capitals landed on the gate and jumped to Oijanen. Once on the other sides, the dreadnoughts simply jumped to emergency cynosural beacons and cleared the system, escaping the clutches of the DRF. However, one Apostle force auxiliary wasn’t so lucky. The DRF seeing the Snuffed Out\Project.Mayhem. capitals making a run for it, pursued them and managed to snag the Apostle as it attempted to reach safety.

In the meantime, the Snuffed Out\Project.Mayhem. fleet was caught at the edge of a bubble, forced to burn to the Oijanen gate and jump after its capitals. On the other side, it quickly anchored up and engaged its DRF counterpart as it desperately tried to rescue its tackled force auxiliary. Once again, the DRF lost logistics and strategic cruisers as the Snuffed Out\Project.Mayhem. fleet hammered it hard, forcing it off the field again and again. However it kept coming back, a seemingly endless supply of reinforcements streaming in from BWF-ZZ.

By then the Apostle had managed to free itself, having been forced to enter triage mode. With its cycle complete and the DRF still scrambling to grab a point on it, it managed to warp out to a friendly citadel in the system. With the Apostle safe, Snuffed Out\Project.Mayhem. fleet also decided to withdraw as DRF numbers continued to climb and it brought 2 Apostles of its own in order to tank the incoming fire. Without delay, the Snuffed Out\Project.Mayhem. strategic cruisers warped out to the same citadel as their Apostle, conceding the field to the DRF.

With its enemies gone, out of its reach, the DRF Proteus fleet had no choice but to extract back to BWF-ZZ, thus ending the battle.

The Titan’s Demise, from the Perspective of the Snuffed Out\Project.Mayhem. Proteus Fleet Mainline Ship

Battle report for the BWF-ZZ and Oijanen systems can be found here.

All told the battle lasted 45 minutes, with the BWF-ZZ system reported as hosting 450 pilots at the peak of the fighting. Time Dilation was not reported by any party.