JEIV-E system, Providence region. On the 9th of October at 18:45 EVE Standard Time, Vanguard Coalition (VG) forces, led by Triumvirate. [TRI] engaged Providence Bloc in the system in a brutal fight that saw much destruction on both sides.

The battle was instigated by VG forces who had reinforced a Fortizar citadel in the JEIV-E system to illicit a response from Providence Bloc as part of their deployment to the area. With the citadel exiting reinforced mode at the early hours of the night, the two sides formed for what they had no doubt would be a massive battle, as the two have clashed bitterly in the past couple of weeks.

VG forces managed to form a 120 Machariel battleship fleet, bridging to the system to a safe spot just before the system’s cynosural jammer went online, blocking further reinforcements from entering. The fleet then remained near its cynosural beacon, waiting for reinforcements to arrive in the form of an 80 pilot League of Unaligned Master Pilots [LUMPY] Tengu strategic cruiser fleet which was traveling to the system via gates, unable to bridge directly due to the jam in effect.

Providence Bloc for its part formed a 170 pilot Nightmare battleship fleet and bridged it to the system at the same time as VG forces, landing its fleet on the citadel and waiting for VG forces to make their move. It was further reinforced by a 50 pilot stealth bomber fleet in a Goku configuration and an entire capital wing consisting of carriers and dreadnoughts. The capitals themselves had been prepared before the fight, staged in the citadel and awaited orders.

For a while, the two sides waited in the system, tension building up as the fleets held their respective positions. Finally, it was broken when news of the Tengu fleet arriving reached the two fleets. The Tengu fleet entered the system through the XHQ-7V gate, the only entry way from outside the pocket which the JEIV-E system is a part of. The inhabitants had secured the gate by anchoring multiple mobile warp disruptors, creating a 60 kilometer radius of interdicted space around the gate. The Tengu fleet, seeing this, decided to burn back to the gate and jump out. 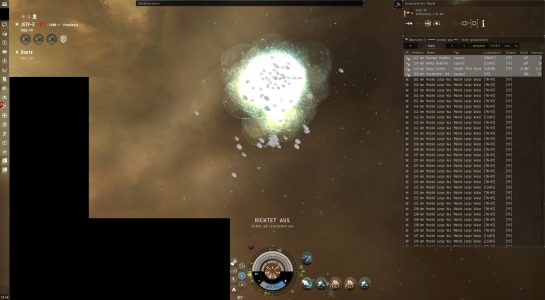 The XHQ-7V Gate in JEIV-E in the Aftermath of the Fight, the Mobile Warp Disruptor Cover Remained Intact Throughout the Fight

By the time it did that, leaving the system behind, the two opposing fleets had warped to the gate itself, landing at the edge of the interdiction fields and around 20 kilometers from each other. Without hesitation, the two fleets opened fire, starting the exchange on the XHQ-7V gate.

The battle proved to be brutal from the onset. Tachyon beam batteries concentrated their laser fire on the Machariels as artillery cannons trained their sights on the moving Nightmares and opened fire, hurtling explosive shells into their ranks in answering barrages. The two fleets maneuvered on the gate around each other, the distance fluctuating throughout the fight but kept between 30 to 60 kilometers mostly. The stealth bomber fleet joined the fight, hurtling its missile payloads from a distance, hovering near the Nightmares themselves and adding its firepower to the mix.

Learning that the battle was in full swing, the Tengu fleet jumped back to the system, quickly burning away from the developing fight and reaching the marginal safety of a 110 kilometers from the Nightmare fleet. From this position the Tengu fleet opened fire, its heavy missiles snaking across the battlefield and hitting the Nightmare’s fleet logistics wing, inflicting casualties. With each missile salvo, a Scimitar logistics cruiser simply evaporated, the firestorm unleashed by the missiles’ detonations overloading shields and incinerating the exposed hulls.

The stealth bomber fleet reacted to the new arrivals and moved to intercept, trying several times to warp on top of the strategic cruisers and unleash its deadly payload in order to force the Tengu fleet off the field. Yet time and again the Tengus proved elusive, burning away from the landing stealth bombers and repaying their efforts with a hail of missiles, inflicting losses.

At the same time, the two battleships fleet were locked in a murderous duel. The Machariels first targeted the support wing of the Nightmare fleet, removing many of its recon ships from the field. One by one, Huginn combat recon cruisers were volleyed, the rain of explosive shells tearing them apart in devastating volleys. The Nightmare fleet retaliated, targeting the Machariels themselves and opening fire. Hundreds of beams of light converged on the Machariels, burning through shields and melting armor plates before plunging into the structure underneath and dissecting it. Within moments, the afflicted battleships simply burst in showers of light as reactors melted down or hulls were incinerated by the concentrated beams.

The Machariel fleet returned fire, having removed much of the support of the Nightmare fleet, it switched its targets to the opposing battleships themselves. Artillery barrages started landing on Nightmares, overwhelming their robust shield systems and crashing into the hull below, shredding it. With each a Nightmare faltered, went silent before being ripped apart by the continued hail of shells. The battle had become a blood bath.

The two fleets continued this trade, battleships on both sides exploding as logistics wings strained to cope with the tremendous firepower hurled at their respective fleets. They struggled bravely to keep every ship alive, but in the end it was mostly in vain. Battleships just evaporated before the logistics cruisers could lock on them and start transferring shields or restore armor. However as the fight wore on the exchange between the two sides grew unequal, Providence Bloc managing to destroy 2 battleships for each one it lost.

During the fight, the citadel finally came out of its reinforced mode. Yet with the enemy fleets preoccupied on the XHQ-7V gate, the structure repaired its damaged armor, restoring it uncontested and guaranteeing its safety. With the citadel firmly secured, Providence Bloc was ready to throw the rest of its reserves into the fight. Its capital wing which waited in case of further escalation now undocked from the citadel and warped in full force to the XHQ-7V gate, landing on the edge of the interdiction fields and at medium range of the maelstrom of battle.

On the field, the carriers unleashed squadrons of fighters against their enemies as dreadnoughts entered their siege cycles and trained their capital turrets on the hostile battleships. The fighters and capital munitions added to the mix were enough to tip the scales, turning an equal battle into a one sided slaughter. The Machariel logistics wing, already under pressure by the Nightmare fleet, was swiftly overwhelmed with the addition of the capitals’ primaries, unable to cope with the growing stream of distress signals from its comrades. This led the trade off between the two sides to grow further and further apart, causing VG forces to lose 5, sometimes 6 battleships for each of Providence Bloc’s. At this point it became clear the fight was lost and all that mattered was to try and extract the remaining forces.

Thus VG forces switched their focus, targeting the heavy interdictors employed by Providence Bloc to pin their fleet down. Barrage after barrage hit the cruisers, many of whom were forced to either cycle down their interdiction fields to receive remote repairs or be destroyed. With most of the heavy interdictors either dispatched or with their interdiction fields inactive, the Machariel fleet seized its opportunity and warped off, leaving the field to Providence Bloc.

With the Machariel fleet gone, Providence Bloc focused its attention on the Tengu fleet which still remained in the outskirts of the fight. The carriers unleashed new squadrons of fighters meant to tackle the fast Tengus, as the Nightmare fleet burnt in, switching to long range ammo. The Tengu fleet realized it had no chance fighting the full Providence Bloc armada, not to say win, and elected to clear tackle and warp off, leaving Providence Bloc as the sole victor on the field.

With the objective secure and the battle won, Providence Bloc extracted its capitals, looting the field for any valuables it could salvage from the wrecks of its allies and foes. Once the field had been picked clean, Providence Bloc remained in the system for a few more minutes, camping in the exhausted VG forces and their allies. However, not wishing to waste more time guarding the XHQ-7V gate, Providence Bloc withdrew its fleets, allowing VG and League of Unaligned Master Pilots to extricate their respective forces.

With the last of the hostiles leaving the system, the battle for the JEIV-E citadel came to a close.

Battle report for the JEIV-E system can be found here.

All told the battle lasted 15 minutes with the system hosting 560 pilots at the peak of the fighting and Time Dilation not reported by any of the combatants.