Last weekend Northern Coalition. [NC] moved from their World War Bee staging system of X-70MU into their newly anchored KeepStar citadel in 93PI-4. This is the fourth Keepstar citadel to be anchored in Nullsec along with Darkness, Circle of Two and Pandemic Horde who have all anchored their own over the last two months.

[NC] appears to be setting down for the summer period and is certainly enjoying the spoils from the end of World War Bee as demonstrated by setting up this new Keepstar. 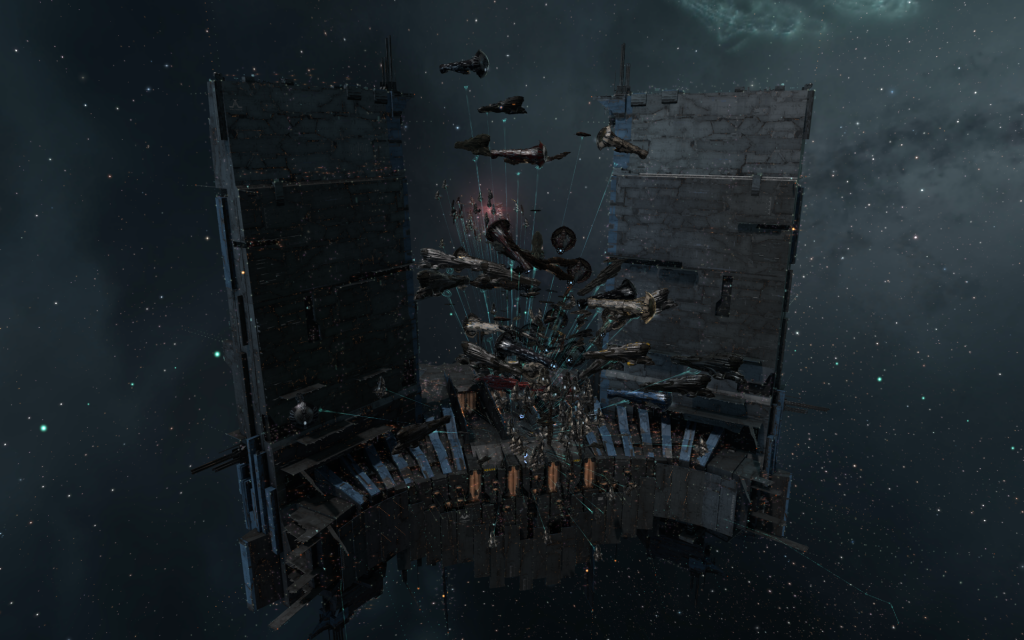 The NC Titan & Super Fleet on its new keepstar

But it appears a disagreement with with their neighbours Mordus Angels [MOA] may stop any plans [NC] had for a quiet summer. CEO of Dissident Agressors and leader of [MOA] Gen Eve wrote a lengthy announcement on reddit as follows:

I will start this alliance announcement by firstly quoting our MOA’s decade old mission statement:

“MORDUS ANGELS IS AN INDEPENDENT MINDED ALLIANCE, PVP FOCUSED AND ORIENTED, WITH THE PURPOSE OF UNDERMINING OR DESTROYING THE CFC IMPERIALISTIC ORGANIZATION AND ITS ALLIES, OR ANY SIMILAR ENTITY THAT MAY COME ABOUT IN THE FUTURE. THE GAME CONTENT WE CREATE IS UNIQUE AND SUSTAINABLE THAT ENABLED US TO PROSPER AND ATTRACT LIKE MINDED PEOPLE AND CORPORATIONS. WE OFFER DOCTRINES, STRATEGIES AND INDEPENDENCE CREATION, THAT HAVE BEEN PROVEN TO BE RESILIENT TO OUTSIDE PRESSURE BY ANY ENTITY DURING THE PAST 8 YEARS OF OUR EXISTENCE. OUR NULL SEC MORDUS’ LEGION AND SISTERS OF EVE LIVING SPACES ALONG WITH SURROUNDING REGIONS IN THE NORTH, OFFER US WEALTH AND PVP ACTIVITIES TO MAXIMUM ABUNDANCE, AS MUCH AS WE WANT TO TAKE OR PARTICIPATE IN.”

That said, now that the war against the CFC and Goonies has been WON the time has suddenly come for the “similar entity in the future” scenario. As we have enjoyed the spoils of the war and divided the space in the north, one entity which thinks it is bigger and more powerful than the rest of us combined, has the natural right for all our riches in Pure Blind and further.

Yesterday , we have been reset by the NC. [Northern Coalition] effective immediately. We knew that will come so it was not a big deal. What it is a big deal is what followed next and in the manner in which events unfolded. I was contacted by the NC top leadership demanding within seconds, yes convoyed within 60 seconds from reset, to surrender all MOA assets ie income moons to NC free of charge, except for payment to be made for the cost of the POS mods only! This comes after we have been the No1 alliance in the war against Goonies killing enemy sov structures, accommodating NC corps with multiple offices in PB for the invasion, Goonie spy intel, and after we being the No1 Goonies/CFC killers in the game for 3 years in the North; facts well documented with links to all data in our public section of the forum.

This ultimatum was simply outrageous from many aspects. NC has publicly declared their intentions that they are about to leave PB in matter of few months the latest. They are simply bored with their game pay stile which is supers heavy dropping caps on even horde T1 cruiser fleets. Therefore, I have offered to pay them the entire income they would have been gaining from this ultimatum – They simply refused. NC owns about 80% already of all income moons in Pure Blind. They simply want to show who is the new boss burning all bridges in the process.

This is a stab in the back for Mordus Angels – plain and simple.

Naturally, we as an alliance voted and decided to uphold the decade old culture and mission for what Mordus Angels stands for and what it is about. We will go to war against NC just like we fought CFC and Goonies, and old NC. before that, and old old NC before that, except this fight will be way easier than the rest of them combined.

Why? Well for multiple reasons: – Game mechanics are such that favors now null sec inhabitants – if they decide to fight against MOA for sov, we will welcome the fight open hands. Supers and forming dozen fleets a day is something no elitist alliance can sustain and NC is not stupid to do so – We have allies and agreements with all our neighbors in PB and around PB – NC is 20times smaller than the CFC coalition was and is concentrated in one system only. They do not posses thousands peeps in various fleets that can attack us in all time zones day after day. -No hell caps are possible any more with our game play style and multiple clone locations, stations, systems. -Just like with Goonies, we will NOT fight NC head on, we will simply KILL NC. -And most importantly, we never forget. NC will leave PB guaranteed 100% or die. They require content for their elitists game play style, something which they will never encounter in PB. Declaring exit time frame strategy before even war started is moronic.

What will this mean for MOA peeps? -for PVPrs/ FCs peeps – 5ZXX central zone of operations for all fleets unless declared otherwise. Combat clones as per clones policy. SRP as usual. Content overload. Details on FC meeting to follow. -for PVE indi peeps – very little change if any – business as usual. NC will not grind line peeps to fight for PB sov.

At the end, I must say one thing. When Goonies did a MOA reset many years back they had a decency to announce their intention via proper diplomatic channels. See link.

The manner in which NC leadership behaved doing the rest and immediate ultimatum is so disgusting do not even deserve a comment. See for yourself the ultimatum and make your decision if you will. See link.

Instead of us making plans to jointly deploy South as I suggested multiple times and fight the Goonies, preventing them to regroup, NC chose PL’s path, which is burning all bridges. By doing so they are indirectly helping and playing into Goonies hands to rebuild and re-conquer.

Enough said. Lets have fun and give them hell!

Mordus Angels – Independence is a Luxury

The debate has raged on the reddit thread here.