Recent developments in Immensea and sustained losses have played a pivotal role in this coming about.  The first major change was FCON flipping sides to join TRI and allies fighting Stainwagon in Immensea.  With this INFAMOUS and allies were consistently outnumbered in most fights and falling back to hit and run tactics to engage these larger fleets.  After a key IHUB loss in the GXK pocket the constellation was considered lost and an alliance wide evacuation of GXK was ordered on July 29th.  A copy of the official order was provided for this article.

As many of you saw, yesterday we have ordered an alliance wide evac of assets out of the GXK station.

All light assets (sub caps ect) should be staged in F4R2 and all heavy assets should be staged in KDF.
We ordered this as GXK has been reinforced by TRI and FCON. GXK being RFed this time is different from past times as we have lost our defensive capabilities in the pocket. We have in the past been able to force TRI and allies to enter the GXK constellation via the DY gate because of system wide cyno inhibs in the pocket. We lost the ability to inhib the pocket when we lost the IHUB in CJNF-J several days ago. This makes defending GXK substantially more difficult.

Please note, the first timer for the GXK station is tomorrow @ 14:48. We will be forming for this station under Soviet Union leadership. Please look for Raven’s pings and join his fleet. If the station is not secured via the fight, it will go into Freeport allowing us to still access assets until the following timer which is expected to take place sometime on Sunday. While this evac is not intended to be a panic evac, you should ensure all assets you want out of GXK are removed by Saturday night at the latest (ideally sooner).
I want to be perfectly clear that this evacuation is not intended to be taken as us abandoning Immensea or our Soviet Union allies. We will continue to operate offensive and defensive operations against TRI and FCON. Our current staging in F4R2 allows us to have a quick response time for anything that develops in Immensea.

Please work with your corp/alliance mates to get assets into the new staging and feel free to contact me if you are having difficulty getting your stuff out.
Standing Orders are as follows:

Earlier today J3B lead a coup within INFAMOUS which was carefully plotted with corps aligned with them.  By using the existing executor corp they kicked any non-compliant corps from the alliance to ensure a vote for control of the alliance went in their favor.  This devious scheme was hatch right at the moment when most of the leadership was offline.  Shortly after a new executor corp controlled by J3B was installed.  A copy of the alliance wide message was provided to me by one of the existing members. 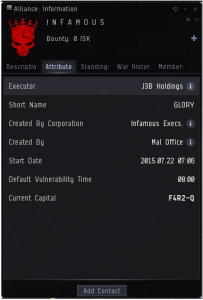 As of a few minutes ago, with the popular support of the corporations, I seized control of I N F A M O U S.

Hellonearth has been removed. Hellphoenix has been proven more than once to be untrustworthy and unreliable, all of HC has agreed to remove him. They still retain temporary blue status so as to not fuck the line members.

We are leaving stainwagon. Hopefully on good terms, but that will be up to Raven.

This means as of now, we are out of the war. Diplomacy has already been achieved with DRF/Vanguard. We are not joining them, we will not attack SW.

The leadership of this alliance has been letting you down. Morale has been down. We can and will do better.

I will give a more detailed mail soon.

Now in control of INFAMOUS J3B has shown their true colors to everyone.  Talking with a few line members the general feeling is they have been stabbed in the back and turned on a long time ally for no great cause or benefit other than to be able to keep current sov and end a war which was harming morale.  Many line members felt this was actually needed to trim the fat of the alliance and see who really put in time and effort for their alliance.  From other sources FCON was in the same boat taking the brunt of many losses as well as inflicting them to INFAMOUS.  Interestingly enough most of the consistent PVP line members and FCs are siding with stainwagon, upholding the strong friendship they have built.  These members strive for content while many of the members involved in the coupe fall into the carebear lineup.  Will the wolves slaughter the sheep?  With line members split on what to do and who to be loyal to this can only lead to a civil war in Catch.  How long before we see Catch burning?  To get more details on this story I reached out to a few corporation leaders within INFAMOUS.

GeneralGree – My activity levels were not meeting the demands of the alliance and I take blame for this, however after having a meeting with Benju I became more active and believed everything was in a state of repair.  Scheduled leadership meetings were held to ensure things were pushed in the right direction.

Aranin – Benju stated if I was present the coup would not have happened, however Benju knew full well I was returning full time in a few weeks.  Benju took this as an opportunity to take control of the alliance and dishonor us all.  It was a stab in the back to be honest.

GeneralGree – I was more than content to hand over the reigns of INFAMOUS to Benju had he asked but he never did.  Instead he chose to backstab the members in this way.

Aranin – The alliance was originally formed with excellent pvpers and the intent to grow with a PVP emphasis.  Now with Benju going in a new direction of grabbing non-invasion pacts with anyone and everyone and the addition of softer corporations the effective fighting force of INFAMOUS is strongly diminished.

GeneralGree – We are all disappointed with how this is ending, however we can no longer trust J3B and are forced to take other actions.  It is sad to see this is what INFAMOUS has become.  Trust means everything and they have none.

Daavid Cee – They betrayed their direct benefactors and took the easy route.  They usurped them simply to keep their ratting space.  They were simply in INFAMOUS because they held sov.  This boiled down to them turning on friends for little red icons.  They avoid conflict at all cost and create NIPs with everyone.  They just want to rat in peace.  Many of the corps in the alliance have no idea what is really going on right now and are being fed a story from Kelnon and Benju.  I do not hold any hard feeling towards leadership or line members.  This is a friggin video game and this is exciting!

This has already exploded all over reddit at the time of this writing.

A follow up article with Benju’s side of the story is coming soon!