The Imperium moves the goal post…again!

For those who missed it, World War Bee is “almost over”.

In an article published on Polygon.com the author, Charlie Hall, contends that “Eve’s massive war (World War Bee) is almost over, but the Imperium will fight on.” Oh and in case we were not aware “The Mittani is out for revenge.” I will agree that in some sense the article is correct. World War Bee has been slowing down in recent days. With the Alliance Tournament around the corner it is no secret that certain alliances will begin to focus on preparing for the competition. Beyond this though I find this piece to be another example of the Mittani doing what he does best, rewriting history and yet again moving the Imperium’s goal posts.

When World War Bee first kicked off my corporation, Southern Comfort,  had just moved to Circle-of-Two and for the first time ever I found myself a member of the Imperium. The first days of the war were filled with Mittani speeches and massive battles around our capital of M-OEE8. The first thing that surprised me being in GigX’s alliance was the ferocity of which they fought and how well we were doing. We heard rumors that we would coordinate with Lawn and Bastion and hold the line in Tribute. As the final timer for the IHUB approached I expected to participate in the mother of all battles and see the vaunted military machine and super fleets of the Imperium come crashing down on the MBC. I expected our area of space was about to become ground zero of a long war. A few hours later I sat stunned and surprised. We had lost and it was all about the numbers. I had expected the MBC to bring a lot of people but I expected the numbers from Goonswarm to be overwhelming. Instead they sent just over 500 pilots. Circle of Two, a 3,000 man alliance, had managed just shy of 400 (approximately 13% of the whole alliance while Goonswarm support of their allies rated a 2% participation). The rest of course is known history as Circle of Two left the Imperium and joined the MBC. 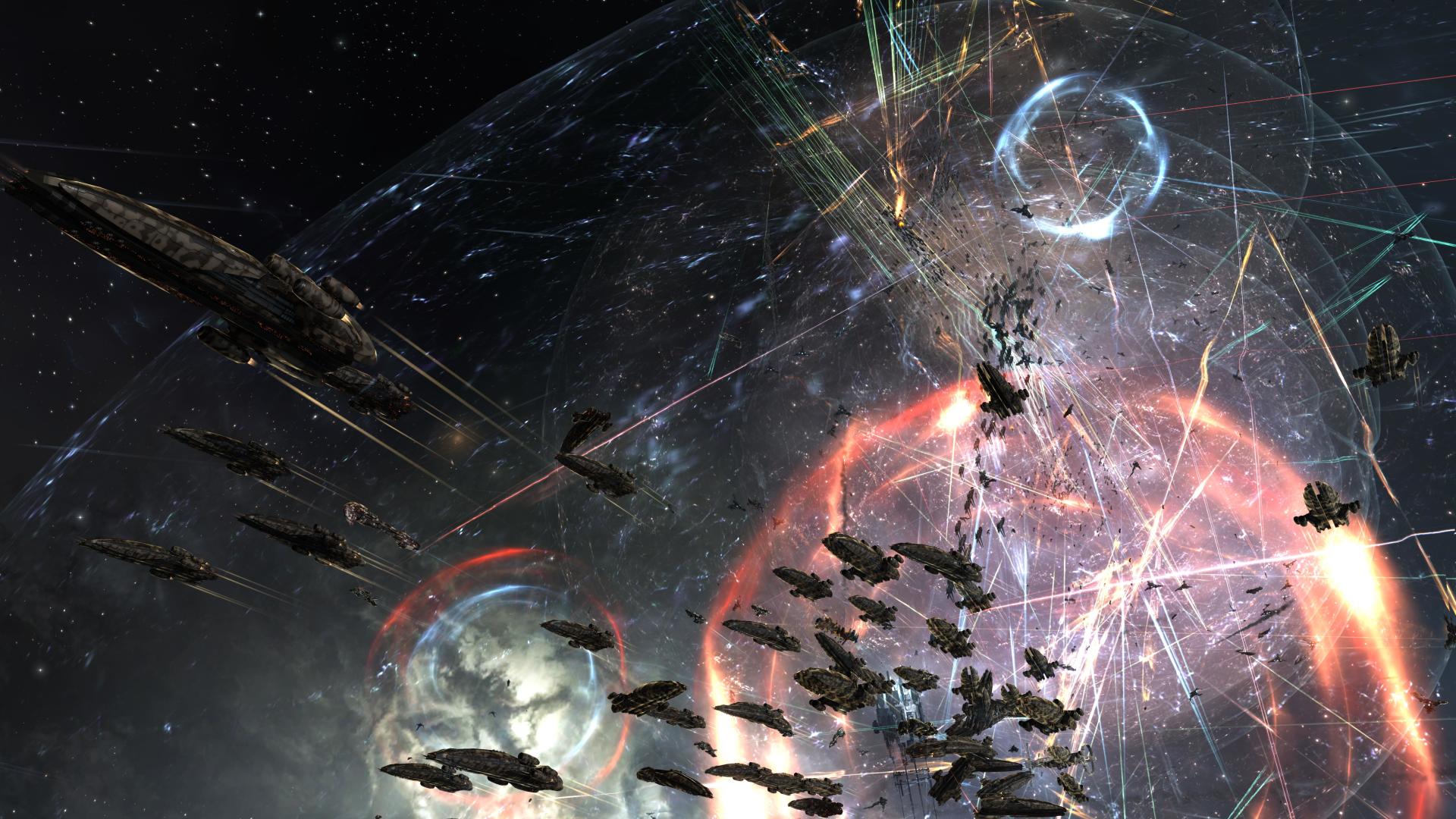 As the war progressed I read the articles from all the sites, watched the propaganda flow, and now as a member of the MBC watch The Mittani move the goalpost time after time as he desperately looked for a way to win. This weeks article from Polygon shows the Mittani continuing to double down on the poorly utilized “Fabian Strategy” that has been the Imperiums most recent strategy in the war. He (The Mittani) further derides the funding of the war as something “that comes from outside the game” and “The vast pool of it from addicts.” Both the Fabian Plan and argument that the I-Want-ISK Casino funding potentially being illegal, harming children, and feeding off of and exploiting addiction is part of a story line that has been pushed by Imperium Leadership from multiple levels. It’s continued use now set’s The Mittani up to once again move the goal post and find a path to victory he can sell to his members. I won’t spend a lot of time poking holes in the Fabian Strategy as Seraph IX Basarab did a good job in this article. I do find his remarks on the I-Want-ISK’s (IWI) participation in the war and its supposed harm to children, addicts, and the game itself to be disingenuous  at the least and petty at a deeper level. To hear the leader of the Imperium, who encourages a culture of intimidation, doxxing, griefing, scamming, theivery, and retribution, and whose  hostile forums (viewed by his young members I might add) are filled with porn, cringe-worthy posts, and racist language then speak about his concern of how IWI might be harming children is laughable. He has a track record of self centered poor behavior, a self promoted bad boy public persona, and years of not caring about anyone other than him and his goons. I feel a whole lot safer with my son playing IWI than I ever would him perusing Goon Forums or “comms.”

Furthermore, his complaint about the war being funded by an outside source that he can not attack as being bad for the game is laughable.  His war chest is supported by a “outside source ” that he personally owns. His argument even further falls apart when you add in that The Mittani and TMC tried to open their own casino which failed spectacularly due to being distrusted by his own members.

Over the last two months I have lost track of the amount of times that he (The Mittani) has changed the narrative and moved the goalposts. Prior to the Battle of M-OEE8 (then Imperium Member) Circle of Two fought hard along with Bastion and Lawn and  was holding the lines. As GigX coordinated the front line defense of Imperium Space to then have The Mittani pull the ball “charlie brown style” and move the goal post  by not only ceding Vale but pulling Bastion and Lawn from the front lines and moving them to Goonswarms staging system leaving Circle of Two a supposed valued ally surrounded and on it’s own. Any support from Imperium Alliances was token at best.

After the Battle of M-OEE8 a new set of directives and strategies emerged:

Our fleet strategy is identical to every other defensive war we have fought for the past decade. When outmatched we will harass with Siege-fleets and Sword-fleets; when we have the advantage we will destroy the enemy with unmitigated savagery. Hostile FCs will spend hours in TiDi being harassed by Sword-fleets or will be systematically head-shot off the field using intelligence from our Black Hand agents. Hostile logistics will be strained by focusing our Siege-fleets on the towers of a particular enemy – C02 is first on the block – until they rage-quit from constantly repping, restronting, or replacing towers.

Outside of fleets we will be relentlessly working to raise the ADMs in our core territory around Saranen. Individuals are encourages to pop hostile cyno frigates outside of their staging systems (Obe, Hakonen, Vlill, PF- Oka, – the War of Sovless Aggression is no mere pun), engage in relisting and market fuckery in those same hostile stagers, and nuisance-hack the low-ADM systems which have fallen to the enemy after the C02 betrayal. Certain constellations with crap ADM that are too far from Saranen are simply to be dropped, such as the territory around 7D in Pure Blind.

EU and US pilots will primarily be on hacking offense, siege-work, and ADM-raising duty going forward, with the occasional CSAA defense when possible. The higher the ADMs across our territory the shorter the vulnerability window is for our West Coast Insomnia crew + AU pilots., who will be manning the Wall and the Night’s Watch for the first time in our coalition’s history. Already they have done a fantastic job and have had a blast with Caracal fleets zonking overconfident T3D gangs. – The Mittani 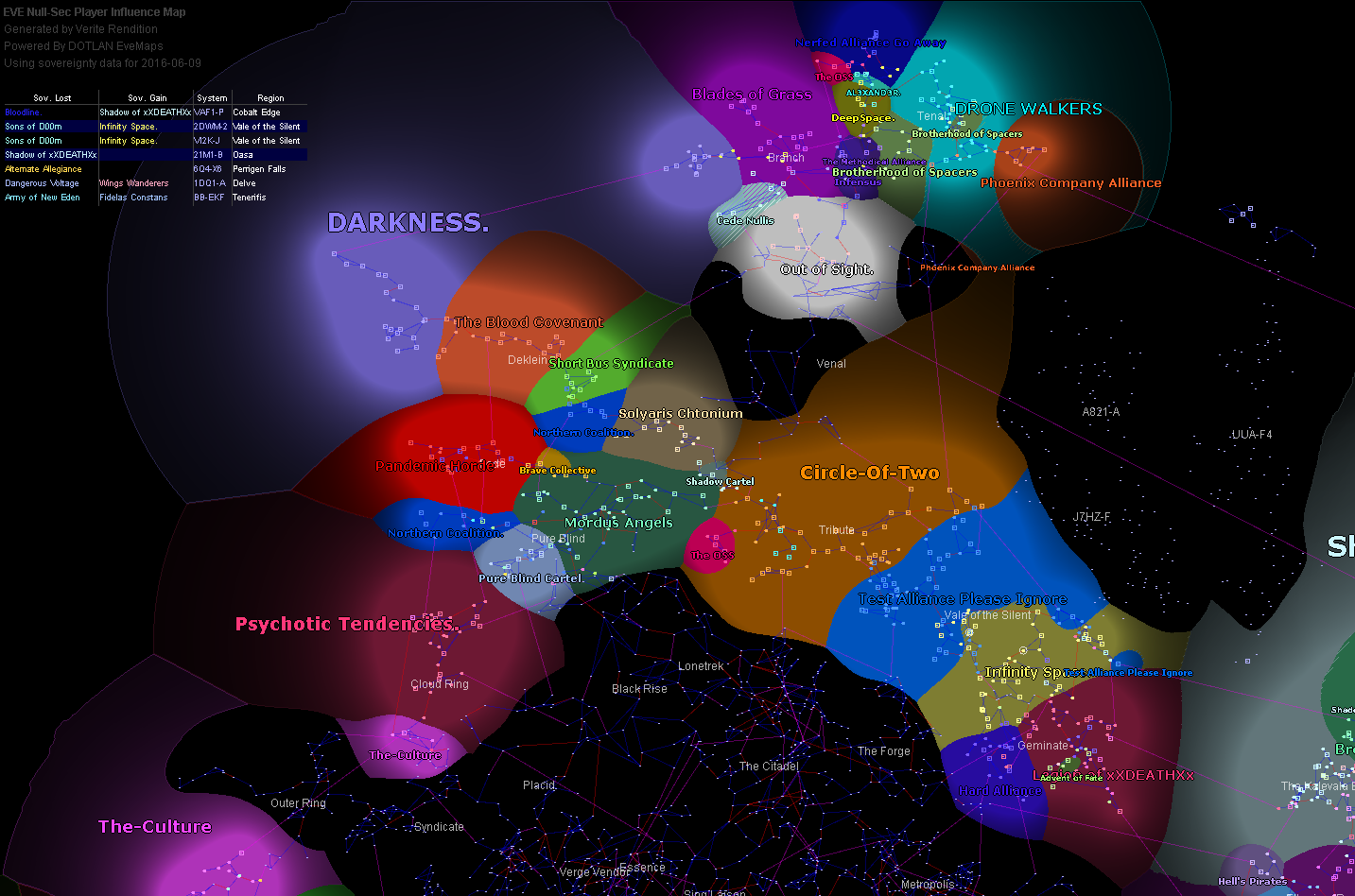 Despite a massive war chest, one of the games largest Super-carrier and Titan Fleets, and a home field advantage the Imperium was never really able to gain the upper hand or oppose the invasion in any meaningful way. The Mittani predicted the MBC would fall apart in two weeks, fight among-st themselves, and had no desire to live in their (Imperium Space) and as such they (the MBC) would not take or hold space but instead just go away.  What actually happened surprised everyone. The promised ‘relentless harassment or destruction’ never happened and in under 60 days the Imperium lost every Region, System, and Station it held.  The ‘hours and hours’ of Tidi promised by The Mittani to attacking FCs while being relentlessly harassed by siege-fleet turned into 30 minute unopposed capture operations. As a Alliance FC for Circle of Two I got to the point that we could not get to the timers fast enough on somedays. The retribution he promised Circle of Two as being “First on the block” never materialized and as system after system fell a group of solid alliances and coalitions took space and actively raised the ADMs in the north making a Imperium counter invasion harder and harder. Former Imperium territory is now held by several powerful alliances that are more than capable of fending off Imperium Aggression.  The new Wardens of the North, Darkness/Guardians of the Galaxy, Pandemic Horde, Circle of Two, TEST Alliance,  Psychotic Tendencies, Phoenix Company Alliance, MOA,  OSS, and others have a combined force of over 35,000 members, as well as the ability to field super-carriers and titans. They have occupied their new homes and are ready to defend them from a now much smaller and weakened Imperium.

After the Imperium failed to halt the MBC in any meaningful way the goal Imperium goal posts were moved once again and the “Fabian Strategy” was announced. This misused name essentially amounted to a strategy of  Imperium Forces, held up in Saranen and under daily camp, while loosing member alliances, corps, and players. It is my opinion that the recent articles and statements by The Mittani is an attempt to paint them as evolving into a Pandemic Legion type entity, which will no doubt have been the plan all along. Imperium Leaders will use this as a narrative to claim that this war was seen as coming and every decision was made with this ultimate goal in mind. Weather a reformed “Imperial Legion” or what ever they re-brand themselves as next can pull it off is unknown. At its core , Goonswarm, has a loyal base that will likely stay together. If the Mittani can find a way to spin the narrative and  move those goalpost one more time this may be his out. It is unlikely his path lies North as any attempt to retake space will result in the MBC alliances reforming and acting to stop them so where they go next remains to be seen. As the end of World War Bee draws closer no one could have ever expected the rapid collapse of the Imperium as it was or the speed at which the invasion succeeded. It is one thing for the Imperium  to say this was planned all along and we can always take our space back when we want to, but than again the MBC can just rinse and repeat as well.