Seraph IX Basarab: Me Against My Brother

Hello, my name is Seraph IX Basarab and I’m an opinion piece writer and analyst of Eve politics and war here at EN24. I’m a member of Psychotic Tendencies serving a diplomatic role as needed. The thoughts and opinions written here are mine and not meant to represent anyone else’s.

Matterall is someone who I find myself disagreeing with on aspects of Eve but even then he generally presents his case in a well thought out manner that’s pleasant to read. Recently he published an article on TMC detailing the events of “World War Bee” or as he prefers “The Merc Wars” while also making a few claims that I felt needed addressing including the role of sov, the casinos and the Money Badger Coalition among others. Along with that, in this article I will also address some key points of contrast between the CFC and the MBC and explain the hierarchy of loyalties that the MBC follows.

One of his claims is that the open ended cost of this war could only have been covered by IWI money. My question would be…what cost? The relevant entities that participated were in large part already financially capable enough to engage in conflict. The overwhelmingly cost in terms of losses has been suffered by the CFC. The money did act as a sparking motivator for certain early groups such as TISHU that had zero interest in any ideological reason to fight the CFC. Other “avant-garde “groups would have likely done it without the money. Perhaps the greatest impact IWI money had was removing the concern for the potential of incurring heavy losses but considering the lackluster resistance the CFC put up most of that money went to expanding capital assets. It would be more accurate to say that the money went not to fighting the war, but served to strengthen these groups in case the CFC would try an actual counter attack. So far, nothing effective has presented itself. I’m in no way minimizing the role IWI played in this conflict, but I think that the emphasis in Matterall’s article was mistimed.

A sour point of lament and an aspect of his argument we’ve disagreed about before privately is the notion that casinos out of game are “untouchable.” The implication is that this is also “unfair.” Now the events of Eve can be guided by a few rich elite outside of the conventional system that limits most Eve online players. (BTW out of game influence is the classical definition of meta gaming…so classic Eve.) However events have always been guided by the rich powerful elite with few exceptions. Even so, their impact is again over estimated. At the end of the day the CFC was a large enough coalition with enough members, power and influence to create their very own alternative to the likes of Somerblink, IWI, EveBet and others. Tens of thousands of people could have been directed at the CFC’s very own casinos yet due to the way they handled business in game, or at least the perception of how they did, soured any sort of trust even their own members had. CFC members filled the pockets of IWI bankers who in turn paid their rivals huge amounts of money to destroy their coalition. I’ve never been the type to really lament over the moral implications of such things. It’s better to simply analyze, adapt and react. In any case the casino business was the CFC’s game to lose. They had all the resources and influence to be real benefactors of this and they dropped the ball.

The article contradicts itself a bit as it claims that the new sov system allowed just about anyone to have an influence in 0.0 which is true, yet the claim is also that “the blob and isk rule eve.” It contradicts itself not that these two things are necessarily in opposition with themselves, but that the author tries to place them in opposition. Essentially both statements are true. Numbers and money do rule and they’re supposed to rule because it’s only reasonable that the side with more resources has the advantage. However the Aegis sov made it so that despite that fact, smaller entities can still have a piece on the chessboard without getting completely wiped out. Plenty of smaller alliances and entities hold sov because they can put up enough of a fight even with their fewer numbers that the larger groups think of it more as a cost than a benefit to try to kick them out. “Whatever so some tiny entity at the edge of my domain holds a system. It’s content.”

Lastly Matterall echoes some misunderstandings regarding the MBC and how it operates. He takes a certain tone not uncommon among CFC members (although he himself is in NCdot.) The argument goes like this: “You guys formed the MBC claiming you want to destroy the blue donut yet you formed a coalition yourselves!” I have to say I’m not sure what relevant entity within the MBC made any such claim that this was some sort of moral crusade against the evils of the blob. There are exactly three reasons the MBC formed: to blow up spaceships, a lot of money, and fuck you, in no particular order. Furthermore the MBC is not a singular monolith but more of an umbrella term for many groups with varying degrees of loyalty and differing priorities. I was recently speaking with a GSF diplomat and she asked me about the inner workings of the MBC. Despite helping out with TISHU’s diplomacy here and there I’m not saying I have a particular insight on the affairs of the MBC. Really most of it is self-evident and with a little bit of effort this is obvious to anyone. In any case the best way to explain it would be through this old Bedouin proverb: “Me against my brother. My brother and I against my cousin. My brother and our cousin against the other clan. Our whole tribe against the world.” What some people fail to understand is that there is a hierarchy of loyalties and depending on the context you can find yourself as an ally one moment and an enemy the next. There are two examples to give. Cloud Ring is currently shared by Psychotic Tendencies and The-Culture. (TISHU owns most of the region while TC territory extends into Fountain.) 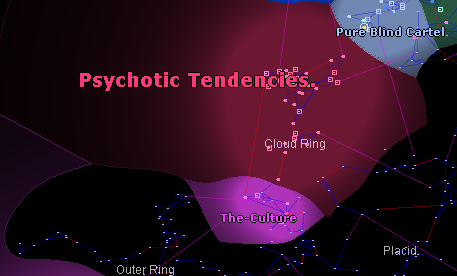 We’ve blued up to go shoot CFC citadels in Saranen, even gave bridges back to their fleets, but the moment we each dock up in our home stations from the fleet, we’re fair game. Right now with my alliance deployed to Saranen, we’ll go on a fleet with Pandemic Horde and after the fleet is over we’re up in Fade roaming and shooting each other. CFC leadership is quick to point this out as ~cracks in the coalition~ which only shows how poorly the CFC understands the MBC. Now contrast this with how the CFC operates: one coalition leader, one list of blues, one direction. When comparing the CFC and the MBC you’re really comparing apples to onions. One is very much consistent while the other has many more layers to peel back and understand. Most MBC alliances have a recruitment policy of players where if you do not have a military function you do not get recruited. In the CFC the alliances are composed of your ratters, your industrialists, your explorers and a bit of pvp here and there. They’re very different compositions. It’s also incorrect to say “CCP created the largest coalition” and more correct to say that the CFC created the largest backlash in the history of Eve through the poor implementation of their questionable policies. The MBC will die with the last remnants of the CFC and I like many will celebrate both.

As a parting thought I’d like to reflect on Matterall’s last line: “The lack of real justice makes this victory the most frustrating I’ve ever been part of.” What justice were you looking for? Why are you looking for justice? In such a world the only justice that exists is the justice you make yourself. And if you are unable to accomplish that, perhaps it had no right to exist in the first place.