The Imperium States Intention to Take Back Deklein

The Imperium has once again stated their intention to stake their claim on the Deklein region of New Eden. The Goonswarm Federation home region since 2010, Deklein was recently lost in the war with the Money Badger Coalition. Current residents within Deklein, Darkness., The Blood Covenant and Solyaris Chtonium Alliances (Guardians Of The Galaxy Coalition) and Northern Coalition, will prove difficult to remove as they are focused on raising the Activity Defense Modifiers to ensure the smallest possible window for an Imperium return, setting some of their vulnerability windows around the daily downtime at 12:00 eve time, a time of particularly low activity. At time of writing, many ADMs for systems in the Deklein region are already standing at 6.0, making any assault on the region as hard as it should have been when Goonswarm Federation called the space their home.

As the war began to hit Deklein, the Imperium was quick to abandon their sovereignty on the assumption that the enemy were mercenary corporations with little interest in holding the territory they took, and that the war would dissipate quickly due to lack of funding from the iwantisk bankers funding the Money Badger Coalition. As this breaking point has overwhelmingly failed to appear, the Imperium have been pressed hard in Saranen, and while holding their own in combat on isk efficiency, War Participation from Imperium Forces (Goonswarm Federation, The Bastion, Get Off My Lawn, Tactical Narcotics Squad, RAZOR, Executive outcomes and The Initiative. Alliances) appears to be on the decline.

Recently, the Imperium lost their Territorial Claim Unit in EWOK-K to Old Sch00l Alliance, returning the Sovereignty counter to zero, and despite a week passing since the Mittani announced that an increased MBC presence in Saranen means less defenders in Deklein, it appears Imperium forces have been unable to press the ‘advantage’ that he sees, due mostly to the permanent hellcamp in Saranen, preventing any meaningful entosis fleet from undocking.

Nevertheless, so called ‘Solo Sov Warriors’ (single entosis ships circumventing Deklein defences through use of covert ops or other means) have attempted small, single ship attacks on Strategic Objectives, leading to occasional reinforcement of IHub and TCU’s for systems in Deklein (most recently 4U90-Z, T-945F, CU9-T0 station and 94-H3F TCU), but all reinforcement timers were reclaimed by Solyaris Chtonium without significant trouble.

The Tactical Picture in Deklein

So, who took up residence in Deklein after the Imperium retreated?

GOTG is a coalition of twelve alliances, totalling 10,072 members, and the sixth largest coalition in New Eden. Made up of members led by the Darkness. Alliance (making up 23% of GOTG), and Solyaris Chtonium (14%), the Coalition was quick to move into the Deklein region following the complete withdrawal of Imperium forces from Null Sec to Saranen, where they remain penned in by MBC forces.Guardians and the Imperium have met in battle before, in Querious last year, during which Darkness. saw several of their allies abandon them or turn on them to join the Imperium forces, including Brave (who accepted a contract with Darkness. and showed up to battle in the ED-L9T in ECM frigates that then proceeded to jam and disrupt the GOTG forces.) This is a coalition that historically has made heavy use of Strategic Cruisers to great effect, but since the Siege of Saranen began has favoured the Svipul and Cerberus fleets, for both brawling and undock camping. Guardians OTG have proved in the past that they are willing to fight unfavourable odds to conclusion, to grind sov mechanics and form up to defend what is theirs, and will be a well organised, disciplined force that will likely fight each and every system to make any attacking fleet wish for home. Holding the majority of the Deklein region under the Darkness., the Blood Covenant and the Solyaris Chtonium alliances (the latter of which who also holds sovereignty in Detorid, Scalding Pass and Wicked Creek), this Coalition as a whole will be the biggest hurdle in any attempt at retaking the Goonswarm’s old home. 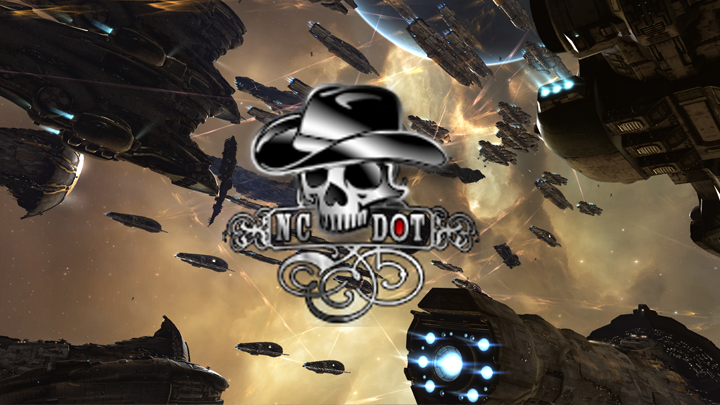 Made up of remnants of Band of Brothers and their previous renter alliance, Northern Associates, NCdot have a member base of 2,729 characters, and a high pedigree of Elite PvP fighters with a long standing grudge against the Goonswarm Federation. Choosing to dissolve the N3 coalition in last years’ Querious conflict, NCdot are not expected to keep what sov they have taken in Deklein, as this has been their pattern with previous conflicts post N3, favouring staging for PvP with small, temporarily held territory for ratting alts, that are abandoned when the fight moves on, as shown by their abandonment of the hard won territory taken from Provi Bloc in Providence as they redeployed to Curse.

NCdot has consistently resisted the Imperium in all forms since the Band of Brothers Coalition. Currently holding sovereignty in 6 Deklein systems (including the previous GSF Capital of YA0-XJ), NCdot also holds 20 systems in Pure Blind, most of which are being left unattended with regards to ADMs. NCdot is an elite PvP alliance, with invitation only recruitment; whether they choose to keep the territory or indeed plan to give it up to GOTG, they will be happy to meet the Imperium on the field if only for the fight itself. While Northern Coalition. are heavily favouring Svipuls in Saranen, they are also well known for their use of Machariel, Abaddon, and Strategic Cruiser fleets, as well as frequently fielding Thanatos and Archons to the undock camps in Saranen. While there have been rumours of NCdot potentially pulling out of the war, these have not been substantiated yet.

Considering the experience of Northern Coalition, and the entrenched nature and mindset of Guardians OTG, the Imperium may be underestimating how hard it will be to take back what was once theirs, and while the Siege of Saranen continues without mercy, this may prove a moot point indeed, as getting out to Deklein might prove too difficult for a coordinated Imperium entosis fleet to achieve until the MBC forces decide that they have enjoyed themselves enough, and go their separate ways. If the Northern Coalition. do leave, and the Imperium’s activity increases as a result, then the Imperium’s retaking of Deklein will be a very interesting conflict.