Daily skirmishes in the Imperium staging system of Saranen have seen like for like losses for both sides. But does this apparent stalemate conceal deeper attempts at an Imperium breakout to Venal and a falling membership?

On May 28th at a so called ‘ovenside‘ session (a play on the weekly Imperium ‘fireside’ Q&A sessions), Money Badger Coalition announced their plan to stage out of Citadels and NPC stations in the Saranen system, putting them face to face with the embattled Imperium. Describing this move as an ‘oppression fleet’, TEST Alliance Please Ignore FC and MBC strategist Progodlegend stated its aim was to force the remaining Imperium pilots to fight a costly battle of attrition over the weeks ahead, causing them to slowly bleed line members.

While this move has proved logistically difficult for some MBC members, whose nullsec capital systems are located far from Saranen, they have never the less demonstrated an ability to form fleets in response to the Imperium. However, despite issuing fleet doctrines designed to counter popular Imperium tactics neither side has emerged as a clear overall winner. A routine has now set in with Imperium fleets forming up and attempting to headshot susceptible targets, such as lone carriers or vulnerable citadels. MBC forces will then respond and attempt to catch the Imperium fleet before it can safely dock up again, with mixed results.

Whilst the situation in Saranen has reached a stalemate, Imperium forces have been attempting to establish a staging bridgehead in Venal by flooding the area around the system of M2-2V1 with Astrahus citadels, nominally anchored under throwaway neutral corporations. This seemingly unimportant area of NPC nullsec may seem at first seem a curious choice, however M2-2V1 is located only 4 jumps away from a backdoor route into the Imperiums previous home in the Deklein region. While MBC forces have successfully destroyed two Imperium citadels in the system, this expensive tactic of spamming Citadels has had some success for them in the past. 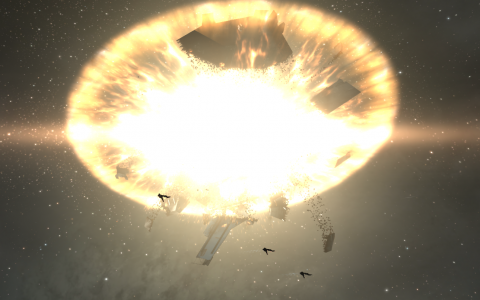 MBC forces destroy one of a number of Imperium citadels in M2-2V1 on June 1st.

It increasingly seems both coalitions are locked in a battle of attrition. The longer this stalemate draws out the more effect it will have on Imperium finances. Imperium line members are losing ISK through inactivity (players not logging on), loss of assets (destroyed POS/POCO and citadels) and fewer opportunities to earn ISK (moon goo, sites and the best ratting prospects). While Imperium linchpin Goonswarm Federation has managed to avoid heavy losses in its membership, fellow coalition members such as The Bastion have not been so fortunate, with the latter hemorrhaging half its membership in the last month. This is in stark contrast to the MBC alliances who have seen a flurry of applications from new and returning players, as well as Imperium defectors. TEST Alliance Please Ignore has nearly doubled in size to 6600 players, reversing its historical decline after the Fountain War and Pandemic Horde has added 3000 members in the last month alone. It now remains to be seen whether the stalemate will cause Imperium defections to reach a critical mass.