The Siege of Saranen begins

Hello, my name is Seraph IX Basarab and I’m an opinion piece writer analyzing politics and war in Eve online. I’m also part of Psychotic Tendencies serving a diplomatic role. The opinions written here are my own and not necessarily representative of anyone else.

Today members of the Money Badger Coalitions declared that they will deploy to Saranen, the current home of Goonswarm Federation and their coalition, self-proclaimed “Imperium” otherwise known as the CFC. This comes after a battle in which the CFC mass undocked arty welp canes (low cost max dps Hurricanes intended to be lost) trading favourable against PL. In response entities including Pandemic Legion, Northern CoalitionDot, Psychotic Tendencies, DARKNESS, TEST Alliance and others have been seen staging among the numerous newly placed Citadels. It’s ironic that last year The Mittani was talking about providing Citadel blue prints to subjects paying their viceroyalty tribute to him and today the NPC lowsec station that acts as the CFC’s home is itself surrounded by Citadels built by would-be subjects. Saranen is looking to be like the hotspot for action for this coming month with local ranging around 600-700. Although the two main sides (CFC and MBC) populate the system, many third parties will likewise be attracted to the potential for this siege to escalate. 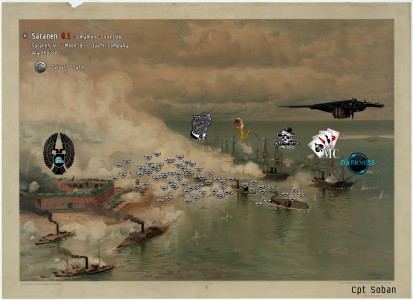 Image by Cpt_Soban of Test Alliance Please Ignore from reddit

The question being asked is what can be achieved by the MBC by deploying to Saranen? There are three reactions the CFC could have from this: They could undock, they can stay dock losing further membership to inactivity, or they can move which will more than likely damage whatever remaining amount of credibility CFC leadership still has. Undocking and trading favorably is the CFC’s only viable option at this point. The MBC doesn’t seem interested in “gudfites.” This is simply putting teeth to the curb.

In my attempt to be as useful as I can be to my alliance I like to inform myself with the on goings of Eve, particularly the opinions of individuals, especially of groups we’re fighting. I had to ask various individuals from line members to directors, why they choose to stick with their group. The answers vary from wanting to stay with their friends, to not wanting to give up, to not wanting to be seen as cowardly or disloyal. Some simply enjoy the organizational level that the CFC has obtained and the options that gives them. Others simply view the larger entities of the MBC as a worse evil. Some are actually extremely adamant about just how awful Pandemic Legion is for the game (and that my alliance, TISHU, are pets for following them despite TISHU’s involvement against the CFC in the current conflict predating PL’s presence by several months.)

The one thing almost all of the people I have spoken with have in common is that none of them actually have any faith, or even like the Mittani. In fact when I bring up that they are serving his interests by being part of the CFC they are very quick to claim otherwise. No one’s ever tried to justify the decisions made by him but instead minimize his role and relevance within the coalition. I’m left with the impression that the remnants of the CFC are made up of people who are not happy with what they have left, and are actually embarrassed of their leadership. However they do not see a viable alternative. Whether this is true or not is debatable but there does seem to be a bit of self convincing going around that somehow leaving the CFC will automatically mean some big impending doom from PL.

The other funny talking point is the claim that MBC are hypocrites. The reasoning goes like this: “If the CFC is a blob and that’s bad, and the MBC formed to destroy that blob by becoming itself a blob, then they’re hypocrites.” First off I have to ask, who even claimed it was about “destroying the blob?” There is this myth perpetuated through CFC talking points that this was some sort of moral crusade. This has nothing to do with some high moral mission to accomplish the nonsense ideologies of some rambling blogger. It has to do with two of the most important things in Eve: Money and blowing spaceships up. That’s it. Stop trying to make it mean more than that.

Hard to say where this will end. No alliance can die in Eve unless its own members give up. It’s possible being hellcamped will have this affect but it’s also possible that egos within the MBC start bickering over something dumb like doctrines or who is more space important. In the event of the latter happening the CFC could claim enough of a morale victory that a departure from Saranen could be viable. Invading the north seems unlikely considering their coalition has lost several alliances and thousands of members. Claims that GSF, specifically Karma fleet is getting “hundreds of applications” has been exaggerated to say the least.

The PL Fortizar ‘Spinmaster9000’ with the DARKNESS Fortizar in the background.

So come to Saranen, shoot stuff. The following few weeks should have something for everyone.