Late into the night during EVE time, the final systems in Pure Blind held by Goonswarm Federation (CONDI) have been swept up by Money Badger Coalition forces in the midst of World War Bee. The final system of MQ-NPY was captured by Mordus Angels (MOA) at 00:37, marking May 23rd as VN Day (Victory in the North Day) for MBC forces.

This event has been followed by a torrent of posting on r/eve/ from the likes of Gobbins (leader of Pandemic Horde) and line members of multiple alliances. Part of what makes this event so momentous is that one of the major stated war goals of the MBC has been completed. While the complete victory scenario for the MBC is nuanced and difficult to encapsulate simply due to the sheer number of alliances and people, it is undeniable that removing the last vestiges of Imperium sovereignty from the map were among them. 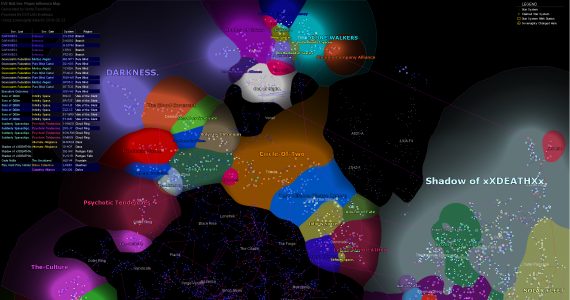 At the outset of the war, and before the MBC really even existed as a concept, alliances such as Pandemic Horde (REKTD) and Northern Coalition. (NC.), as well as a slew of other major entities, had entered the low security regions surrounding Imperium space to both assist the LowSec Voltron forces battling it out with the Imperium and to assist in TISHU’s efforts against Space Monkeys Alliance (SMA) to lower ADMs and make the space unlivable, which ultimately softened it and the Imperium up before what is now known as the Money Badger Coalition were united by ISK banker Lenny Kravitz. The co-ordination and sheer firepower brought to bear proved too much for the Imperium and they began a rapid retreat into Saranen, leading us to today’s situation.

EVE News 24 has reached out to Killah Bee, one of the leaders of the MBC and among the inspirations for the naming of the war, for comment.

EN24: “How do you feel about the last of Goon sov being wiped from the map? Does this change anything in the war for you? What will be your overall goal now that this milestone has been overcome?”

Killah Bee: “The goon being wiped off the map is more a morale than a strategic victory to us and it gives the war an interesting twist because there is nothing left to do. We’ve killed the CFC. We liberated the North (for now) [but] the real question is “What’s next?” Killing the GSF has never been a realistic goal so for me its about doing as much damage to them as possible.

EN24: “Is the war still continuing for you? What do you envision for the end of World War Bee?”

Killah Bee: “Since we aren’t a real coalition there has never been a set goal for us on when the war is over so I am sure every alliance had their own goals. For me, it was to kill the CFC as a coalition and at least purge their space once. If the “war” continues or not is all about the narrative. I think we are close to an end. Interesting will be whats gonna happen when the GSF will try to take back their space– that should generate a lot of content.”

Meanwhile, while there are no longer invading entosis fleets after Goon and Imperium space, the Pandemic Legion Fortizar sits nearby the Saranen undock with a host of Goon Astrahus Citadels while the Imperium contemplates their next move. Even still, fighting is taking place in lowsec and the MBC guard closely the newly gained sovereignty. Whether the Imperium renews its offensive or retreats to new space has yet to be announced.