Iitanmadan system, Lonetrek region. On the 15th of April at 20:15 EVE Standard Time, a Providence Bloc fleet was annihilated by Pandemic Legion [-10.0] forces in the system.

Providence Bloc organized an estimated 250 pilot mixed armor battleship fleet with a few capital escorts in order to provoke a fight from Imperium forces stationed in the Saranen system of the Lonetrek region, where the coalition stages. The force made its way from its deployment zone to Saranen, getting spotted along the way by Pandemic Legion scouts.

Pandemic Legion had deployed to the neighboring region of Pure Blind as part of the war waged by allied forces against the Imperium. Its scouts keeping a close eye on the Imperium staging system of Saranen. With news of the Providence Bloc fleet on its way to instigate a fight from the Imperium, Pandemic Legion fleet commanders decided to use the opportunity and formed their own fleet, a 130 pilot Proteus strategic cruiser fleet supported by 6 triage carriers and a full supercarrier wing which was kept in reserve.

Providence Bloc, wanting to ensure a fight moved to the Daras system in order to engage on the Iitanmadan gate which should have been outside of the reach of Pandemic Legion. The Imperium Megathron battleship fleet, also known as “Baltec” or “Grinder” fleet, of an equal size made its way to Daras as well. The two sides met on the Iitanmadan gate and opened fire, thus starting the fight.

The two fleets engaged each other at close range, exchanging fire over the Iitanmadan gate. Battleships on both sides exploded as the incredible firepower possessed by the opposing fleets overwhelmed shields and armor plates, leaving vulnerable hulls to suffer the onslaught. As explosions rocked both formations, a third fleet joined the fray.

A small Shadow Cartel [SHDWC] Cerberus heavy assault cruiser fleet, estimated at 50 pilots, had spotted the two fleets fighting and decided to engage them, warping at range of the melee and unleashing its missiles far away from the maelstrom.

As the battle went into full swing, a cynosural beacon was lit on the grid, heralding the arrival of Pandemic Legion. Shortly after a Northern Coalition. [NC] fleet also arrived in the neighbouring system of Iitanmadan. Northern Coalition. had knowledge of the battle and formed a 170 pilot Proteus fleet of its own with the intention of helping the Providence Bloc fleet once the fight had begun.

With hostile reinforcements entering the system, Imperium forces quickly disengaged and warped off the grid, bouncing between celestial bodies before extracting to high security space and abandoning the fight.

Failing to catch the retreating Imperium fleet, Northern Coalition. withdrew while Pandemic Legion turned its attention to Providence Bloc as it attempted to extract back to its deployment zone. By the time the Providence Bloc force had jumped into the Iitanmadan system in order to escape, it was too late.

The Pandemic Legion fleet jumped after the slower battleships, its strategic cruisers tackling the larger ships and forcing the fleet to fight on the Daras gate as they uncloaked. 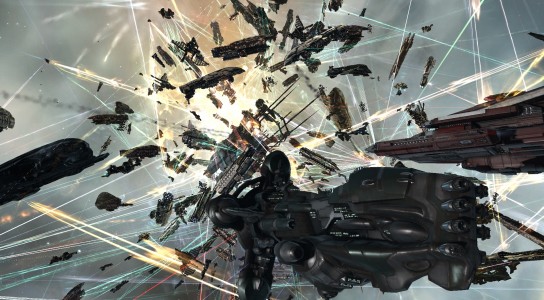 The Battle on the Daras Gate in the Iitanmadan System

The first exchanges proved brutal, as battleships and strategic cruisers evaporated in the crossfire, the logistics wing of both fleets proving to be utterly useless. At this point though, Providence Bloc made a fatal mistake. Instead of pressing its advantage in numbers and continue targeting the strategic cruisers which proved quite squishy in face of the battleship barrages, its fleet commander chose to concentrate on the Pandemic Legion’s triage carriers.

The first triage carrier was easily felled by the Providence Bloc coordinated strike, with a second carrier resisting but slowly losing ground as the battleships tore chunks of its armor. Yet at the same time, the strategic cruisers were able to cut down many of the battleships, inflicting casualties unopposed. 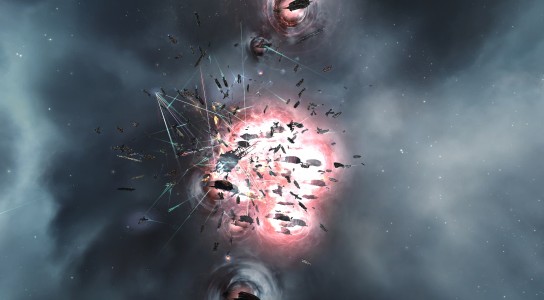 Finally, Pandemic Legion fleet commanders had enough and lit a cynosural beacon on the gate, unleashing their supercarrier wing on the unsuspecting battleships. With the supercarriers on the field, the battle turned into a massacre as swarms of fighters chewed through multiple battleships, the behemoths controlling them supported by the strategic cruisers who continued to spread tackle and pin down segments of the Providence Bloc fleet.

Realizing the battle was unwinnable at that point and preferring to avoid total annihilation, the Providence Bloc fleet commander ordered the fleet to disengage and retreat. Those who were able to, warped off while Pandemic Legion forces busied themselves with destroying those unlucky few to be caught.

With Providence Bloc on the run, Pandemic Legion finished clearing the field and safely extracted its forces, bringing an end to the fighting. 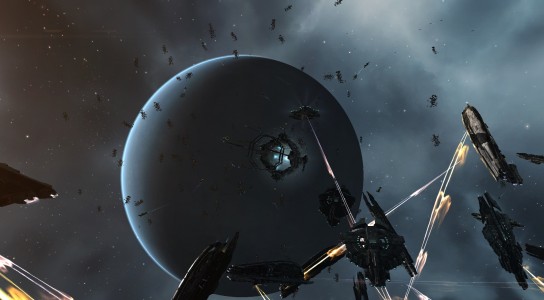 Battle report for the Daras and Iitanmadan systems can be found here.

The battle lasted 35 minutes with Time Dilation peaking at 10% and remaining quite high throughout most of the fight. The system of Daras saw approximately 700 pilots at the start of the fighting, while Iitanmadan saw nearly 650 pilots at the height of the battle.