With Imperium forces defending the South from the hordes of Alliances from in the south a new front has opened up as a new group has invaded the northern region of Tenal.

Tenal is the home to Imperium Alliances The Initiative. and RAZOR Alliance

This may come as a surprise to many as the drone regions are commonly believed to be the Legion of xXDEATHXx rental empire, but this is not entirely correct – there are a number of independent groups who live in the area, they include:

In total the Drone Walkers represent another 163 corporations with some 9,000 members entering the wider conflict bolstering the allied forces to nearly 40,000.

Living in the regions immediately next to the Imperiums northern border, these independent alliances that form the Drone Walkers found themselves under threat from the Imperiums Viceroy plans announced in November. The threat has been exacerbated by the recent changes in drone NPC loot value which were introduced by CCP in form of the new damage controls and capital modules.

Taking advantage of wider war in the south the Drone Walkers have pre-emptively invaded the region of Tenal catching The Initiative flat footed (who were deployed elsewhere) as they scrambled back to Tenal in an attempt to mount a defence. Despite this, the Drone Walkers have rapidly pushed into the region with over 5 systems already captured and another 11 reinforced in just three days. 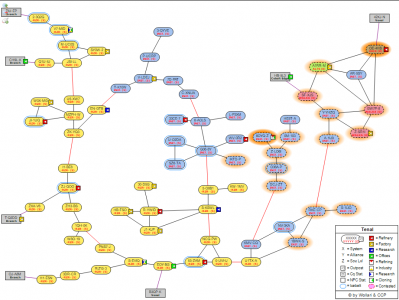 The Tenal region as of 28 of March

The Drone Walkers new forces quickly integrated into the Allies mesh and fought side by side for a IHUB timer in OE-4HB (look out for a battle report on this over the coming days). With the Imperium being forced to redirect fleets from the south allowing Allied forces to achieve further strategic objectives in the regions of Tribute, Pure Blind, and Fade.

With the Mittani announcing on the MetaShow last night that the Imperium was to abandon Vale Of The Silent due to the sustained attacks across its territory and overstretched forces, the opening of a new front from an unexpected source will only add to the Imperium’s troubles.