2DWM-2 system, Vale of the Silent region. On the 23rd of March at 20:00 EVE Standard Time, one of the largest fleet fights in the last year was fought.

The fight was part of the on going war between the Imperium and allied forces and was over a tower. The tower in question housed a Supercapital Ship Assembly Array (SSAA) and reportedly was in the process of assembling a number of super capitals including a titan or titans. Allied forces had reinforced the tower twice in the past, with the Imperium managing to save it successfully on those occasions. However it seems the allies were determined that the super capitals the tower contained would not see the light of day, reinforcing it for a third time. With the invulnerability timer slowly running out, both sides prepared for a major confrontation. 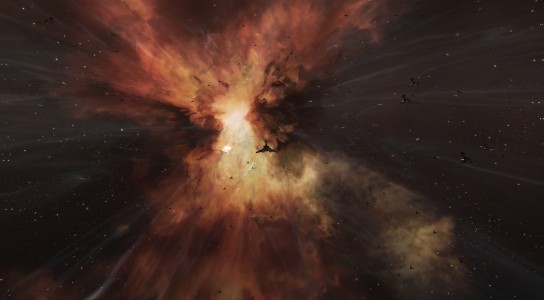 Allied Rattlesnake Fleet in Warp, Burning towards the 2DWM-2 System

The main force of the allies, represented by the Rattlesnake and Proteus fleets, advanced to the system first, entering it well before the tower was set to exit reinforced mode. The force warped to a tower in the system housing the cynosural jammer and opened fire on it, putting it into structure and thus incapacitating it. This meant the allies could now jump heavy assets such as super capitals and reinforcements to the system itself, as the Imperium was no longer able to jam it.

Next the main force warped to the Supercapital Ship Assembly tower, setting up near the shields. With the field secured and allied reinforcements pouring in, a cynosural beacon was quickly lit near the Rattlesnake fleet and ushered in a full supercarrier wing. The supercarriers took their position next to the battleships, the two fleets spreading out and setting up mobile warp disruption fields in order to protect themselves from enemy stealth bombers or being warped on by Imperium fleets. 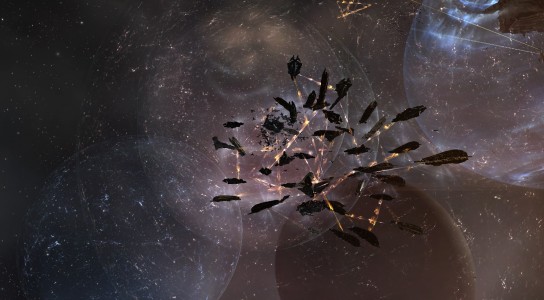 Allied Super Capital Fleet Setting Up on the Tower

While the allies waited for the Imperium to form its fleets, the tower exited reinforced mode and the allies started bombarding it, taking it down into half structure by the time reports of Imperium forces undocking and making their way to the system arrived. With the Imperium seemingly willing to commit, the allies set themselves up in system and waited.

The Imperium for its part managed to pull 800 pilots, forming 3 Machariel fleets accompanied by a Cerberus fleet and supported by a few stealth bomber squadrons. The fleets made their way to the system with two of the three Machariel fleets entering at the same time. One of which warped to a ping off the tower, while the other landed a few moments later near the allied supercarrier force. Both sides immediately opened fire, starting the battle.

The Imperium found itself outnumbered and outgunned as the Machariel fleet that had landed near the supercarriers became the focus of the Proteus fleets and the Rattlesnakes. The immense firepower possessed by the three fleets proved overwhelming, with the Machariels simply melting to the incoming volleys thrown at it. One by one mainline ships simply popped while the supercarriers unleashed their swarm of fighters. The Machariels started to burn away from the allied fleets in an attempt to re-position and/or flee. The other Machariel fleet tried to help but was soon beset by allied bombers with devastating consequences. 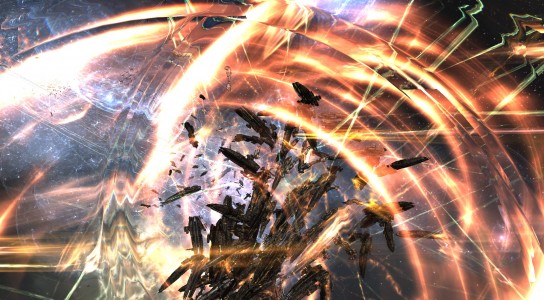 An Imperium Machariel Fleet Being Hit by Allied Bombers

Time and time again allied bombers swooped down on the Machariels, launching their deadly payloads at the huddled ranks of the battleships, stripping them of shields and even armour each time they tried to get on the grid to assist the the first fleet. But ultimately they were unable to remain on the field for any extended period of time.  With the allies seemingly having an endless supply of bombers the second Machariel fleet members began panic broadcasting and  communications quickly broke down. The second Machariel fleet had no choice but to dock up in the system, effectively removing it from the battle.

While this was going on, the first Machariel fleet was simply obliterated. The battleships attempted to draw distance and escape from the allied fleets, but were quickly bubbled and tackled by the Proteus fleets who swarmed all over them, spreading warp scramblers and ensuring the battleships could not escape. Hammered on all sides by the Proteus fleets, the Rattlesnakes and the supercarriers, the Machariels soon found themselves without their fleet commander, leading to more confusion in their battered ranks.

As allied fleets started converging on the remaining Machariel fleet, continuing its destruction, reinforcements came in the form of a Cerberus fleet and a third Machariel fleet. However after arriving to the field, the Cerberus fleet was quickly chased away by the allies, negating its effectiveness and making its contribution to the main battle negligible at best. The third Machariel fleet however, attempted to land on top of the strategic cruisers, which turned out to be a grave mistake. Now the Imperium had not one, but two Machariel fleets trapped on the tower with no rescue in sight. 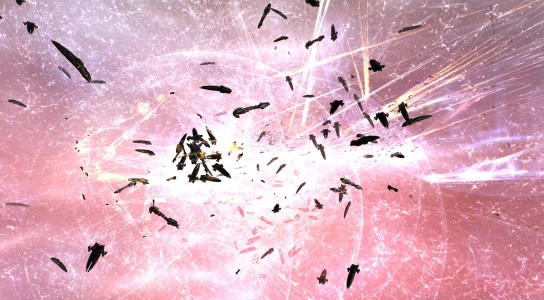 Imperium Machariels Trapped on the Tower by Allied Forces

As the remnants of the first Imperium fleet were being dealt with, the allies switched their attention to the fresh Imperium Machariel fleet which quickly attempted to burn out of the thick cover of bubbles. Allied interdictors though had no intention of letting it escape and kept the force bubbled, the Proteus fleets adding their own warp scramblers to the mix as the strategic cruisers swarmed the new fleet as well.

The Rattlesnakes also burnt closer in an attempt to keep up with the fleeing battleships who were now attempting mostly to smartbomb and fire on the supercarriers’ fighters in an attempt to negate some of the damage poured onto them. Imperium stealth bomber squadrons also made attempts to free the battleships but were ultimately unsuccessful. As the allies closed spreading tackle all over the fleet, effectively holding it on grid with no hope of escaping.

At the same time, the tower itself was destroyed by a titan which was brought to the field, mostly as a deterrent to any Imperium attempts to bring triage carriers to the fight. As the fleets focused their fire on the Imperium Machariel fleets, the titan worked on hitting the tower, slowly grinding it’s remaining structure destroying it leaving the SSAA exposed. With the tower down, the fragile SSAA proved no match to the allied fleets’ barrages and was easily dispatched, thus securing the strategic victory for the allies. 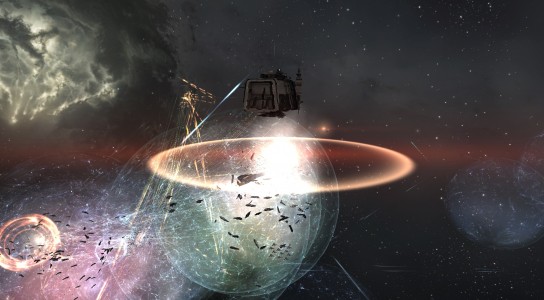 With the objective lost and most of the Imperium force decimated, the last Machariel fleet could do nothing but wait for its inevitable destruction by the hands of the allies who kept the battleships firmly tackled. Thus, the Imperium fleet commander gave the order for his pilots to self destruct their ships rather than wait for the allies’s mercy, leading to the total annihilation of the fleet.

Having secured the field and won the objective, the main allied force made preparations to depart while other allied fleets roamed the system, attempting to catch the elusive Imperium Cerberus fleet which continued to linger around. The Cerberus fleet was chased around the system, suffering losses as allied fleets time after time landed on top of it, managing to inflict a few casualties before the fleet could once again escape, finally departing the system.

As the battle raged on in the 2DWM-2 system, an allied task force took advantage of the distraction and reinforced more towers in the Branch region, while other allied gangs carried entosis operations throughout Imperium space, generating more timers and increasing the pressure on the besieged empire.

With both the field and the objective won, the allies departed the system, safely extracting all their assets back to their various staging systems without further incidents.

The Battle from the Perspective of the Allied Proteus Fleet

Instances of Bombing Runs during the Battle, from the Perspective of the Pandemic Legion Stealth Bomber Wing

Battle report for the 2DWM-2 system can be found here.

The battle lasted 2 hours and 30 minutes, with Time Dilation being ever present, reaching 10% and remaining firmly there for the entire battle. The system itself hosted 2260 players at the height of the fighting, marking it as the biggest battle since the start of the year.

Allied forces lost 163 ships in the fight, including but not limited to: 18 battleships, 3 strategic cruisers, 6 heavy assault cruisers and 20 cruisers for a total of 19.71 billion ISK lost. Approximately a third of all the losses were incurred by instances of friendly fire, as much confusion reigned in the system.
The Imperium lost 404 ships, including 209 battleships and 28 heavy assault cruisers for a total of 163.61 billion ISK damage.