Hakonen system, Lonetrek region. On the 9th of March at 23:30 EVE Standard Time, Imperium forces lost three titans and one supercarrier to combined Low Sec Voltron and Pandemic Legion [-10.0] forces over a tower in the system.

The chain of events that led to the loss of the super capitals started when a 70 pilot Low Sec Voltron (LSV) Machariel battleship fleet, including two capital squadrons comprised of dreadnoughts and triage carriers, arrived in the Hakonen system with the intent of reinforcing a Circle-Of-Two [CO2] tower. Setting up on the tower, the dreadnoughts entered their siege cycles and the fleet opened fire. Comms soon crackled with scouts reporting a 100-strong Imperium Proteus strategic cruiser fleet en route.

Preparing to engage the sub-capitals and extract its dreadnoughts, the Machariel fleet was caught by surprise when a cynosural beacon was lit on top of it, ushering in a small Imperium super capital wing with some capital support, estimated at 40 pilots. This force landed right on top of the battleships and was quickly joined by the Proteus fleet that had entered the system around the same time, opening fire on the LSV fleet and starting the battle proper.

The two sides fought at an extremely close range on the tower itself. The LSV fleet quickly overcame their initial surprise and had their numerous heavy interdictors spread tackle on the super capitals, which forced the Proteus fleet to concentrate fire early on the heavy interdictors to free its super capitals, all the while Machariels pummeled it with their auto-cannons, shredding the strategic cruiser hulls. The Machariels also put their energy neutralizers to good use, draining the capacitor of the super capitals present, who were busy clearing LSV capitals from the field. 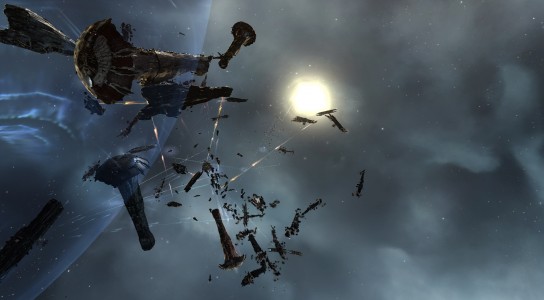 LSV continued to brawl the Imperium fleet while calling for allies and reinforcements, a steady stream of which poured into the system as the ranks of the fleet steadily swelled. Deciding to concentrate on the Ragnarok titan present, as it had the weakest tank out of the super capitals assembled on the field, the LSV fleet commanders made the decision to bring in more dreadnoughts and focus fire on the titan.

With the new dreadnoughts deployed on the field alongside the reinforcements, the Ragnarok simply melted under the combined firepower and caved in, its hull exploding and sending debris everywhere. Maintaining its momentum, the LSV fleet turned its formidable firepower on one of the Nyx supercarriers present, all the while losing dreadnoughts and heavy interdictors at a steady rate.

The Nyx fared no better than the Ragnarok and was quickly dispatched by the assembled force. By now the super capital fleet had managed to clear a fair number of LSV capitals from the grid but after losing two of its members had started to retreat slowly into the tower’s shields. The LSV fleet commanders had also decided to attempt to extract their capitals rather than lose more dreadnoughts needlessly, concentrating instead on the Proteus fleet present while clearing Imperium support capitals as well.

The Machariels had no difficulty obliterating the Proteus fleet, easily overwhelming the strategic cruisers with their auto-cannons’ rapid fire. Proteus strategic cruisers evaporated in quick succession, one of the early casualties being the Imperium’s fleet commander. Unable to tank the incoming damage and having lost its commander, the Proteus fleet quickly withdrew, abandoning the super capitals to their fate.

The LSV fleet used the opportunity to try bumping the super capitals who tried to burn into the safety of the tower’s shields, the majority of the fleet making it inside, except a few titans and super carriers which were still far from the shields’ edge. At this point more reinforcements arrived for the LSV fleet, including a 90 pilot Pandemic Legion Proteus fleet. The PL Proteus fleet joined the fray, landing at the center of the battle and targeting the supercarriers’ fighter bombers to alleviate the damage on the field as the remaining super capitals continued to destroy the few LSV capitals still present.

With Pandemic Legion on the field, the LSV fleet was able to clear the swarm of fighters and fighter bombers from the grid and rebuff the few attempts the Imperium’s Proteus fleet made to return to the grid. This allowed the Machariels to concentrate on bumping two of the titans away from the tower. Having also extracted the majority of its capitals and with enough sub capitals on the grid, the LSV fleet felt confident enough to light a cynosural beacon and bring forth a super capital squadron of its own. The super capitals targeted one of the bumped titans, an Avatar, and started chewing through its armor. 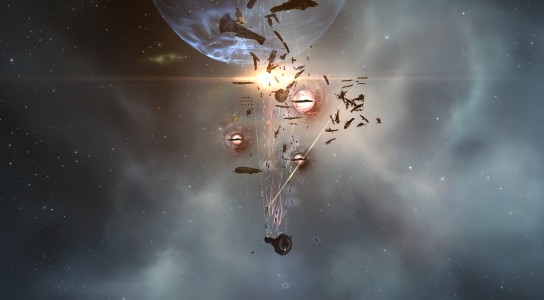 With the pressure of the Machariels’ energy neutralizers and the swarm of fighter bombers descending on it, the titan languished for a few moments, attempting to tank the incoming fire before finally surrendering to the onslaught. Before the conflagration of the Avatar’s demise had sputtered out, the allies quickly shifted their focus to the last remaining hostile super capital still outside the tower’s shields – another Avatar titan.

It too was pummeled by the combined allied forces, the LSV titans even unleashing their doomsday weapons on its helpless hull. Much like its fallen brethren, it quickly succumbed, exploding in a bright flash. 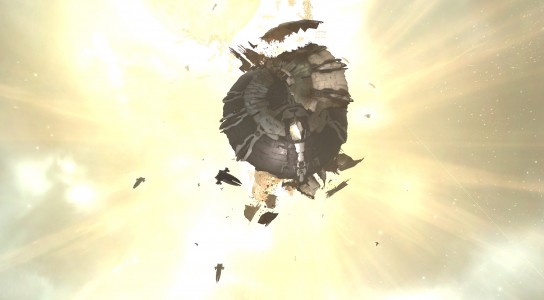 The Imperium Avatar in its Moment of Death

With the rest of the Imperium super capitals safe within the tower’s shields and reports of Imperium reinforcements en-route, the allied forces decided to withdraw rather than continue to fight. LSV managed to safely extract its super capitals and remaining capitals, though lost a few of its subcapitals during the extraction. As for Pandemic Legion, its Proteus fleet managed to return to its staging system without further incident.

With the allies managing to retreat, the Imperium extracted its remaining super capitals, managing to save the tower at a terrible cost.

All told the battle lasted 40 minutes with Time Dilation not reported and the system hosting 670 pilots near the end of the fighting.