Jan system, Lonetrek region. On the 9th of February, a large battle took place in the system between the Imperium and a loose coalition of alliances, culminating in more than 400 ships destroyed for 200 billion ISK of damage.

The battle was fought over a Circle-Of-Two [CO2] tower, reinforced by Snuffed Out [B B C] as part of the continued war between the Imperium and low security space residents. With previous fights seeing a large number of participants and the timer set to expire at a prime time for both sides, a massive battle was sure to ensue.

Against this, residents of low and NPC null security space banded together to bring an impressive 210 pilot Machariel fleet of their own, supported by 2 Proteus strategic cruisers fleets supplied by Pandemic Legion [-10.0] and Northern Coalition. [NC], estimated at 120 pilots each.

Circle-Of-Two and the Imperium’s Hurricane fleet had already set up on the tower itself, with triage carriers restoring the shields when the so-called “Low Sec Voltron” Machariel fleet gathered quickly in the system at the Nalvula gate and warped to the Circle-Of-Two Machariels at close range, starting a brutal close range exchange.

Both sides immediately experienced losses as the two sides volleyed mainline ships in the initial stages of the battle, Circle-Of-Two enjoying the advantage of the Hurricane Fleet and its triage carriers present on the field. However, the Low Sec Voltron fleet quickly brought its triage carriers and managed to stabilize, leading both fleets to attempt and probe weaknesses in the opposing fleets as Time Dilation made rapid fire switches nearly impossible. 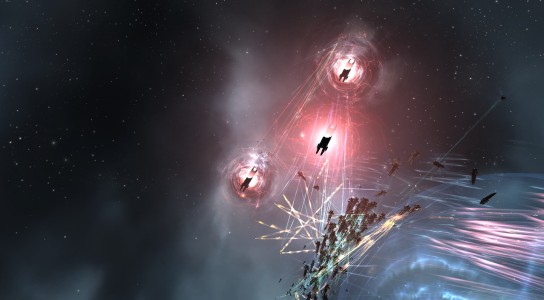 At the same time, the Pandemic Legion Proteus fleet managed to land on the Imperium’s Hurricane fleet. Not content to merely dismantle the Imperium’s Hurricane fleet, its many Legion strategic cruisers used their tracking disruptors to lend help to the Low Sec Voltron fleet, decreasing the tracking ability of many of the Circle-Of-Two Machariels. The Hurricane fleet was quickly overwhelmed by the Pandemic Legion strategic cruisers, not helped by the arrival of Northern Coalition. reinforcements which easily boxed it in. To this was added the auto-cannon fire of the Low Sec Voltron Machariels in their attempt to clear as much hostile firepower from the grid. 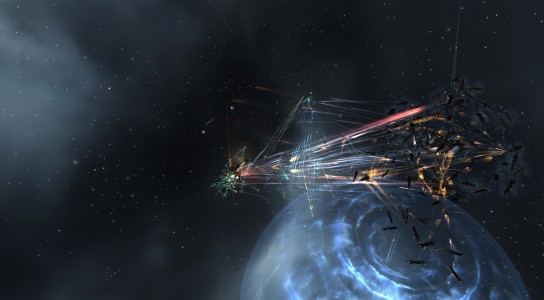 However, this escape proved short-lived as the Pandemic Legion fleet quickly followed the Imperium’s Proteus fleet, landing on top of it and quickly tackling it. The two fleets tangled as the other forces were still busy wiping the remnants of the Hurricane Fleet. At this point, the Low Sec Voltron fleet switched targets to the tower itself, as Circle-Of-Two forces took advantage of the battle to repair the tower. Before it could reach 51% shield capacity and be re-fueled, Low Sec Voltron forces started firing on it while engaging the triage carriers present, bringing a whole squadron of dreadnoughts to the field to help in the process.

While this was going on, the Circle-Of-Two fleet perched above the grid before landing on top of the Pandemic Legion fleet. Pandemic Legion forces were able to inflict several losses on the Imperium’s Proteus fleet, which was obliged to bring a triage carrier of its own. However even with the triage carrier present, the fleet was hard pressed to tank the incoming damage as Pandemic Legion focused on softer targets in the fleet, such as Legion and Loki strategic cruisers, which failed, for the most part, to hold against the enemy fire. 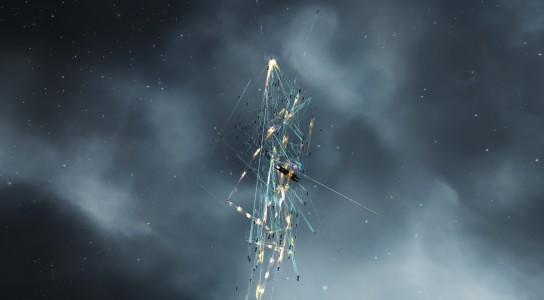 Northern Coalition. And Low Sec Voltron fleets quickly joined the fray, as the majority of the triage carriers on the tower were taken care of and the Low Sec Voltron dreadnoughts started the job of destroying the tower. The only Imperium force present near them were the remnants of the Hurricane Fleet which poised no danger to the capitals. 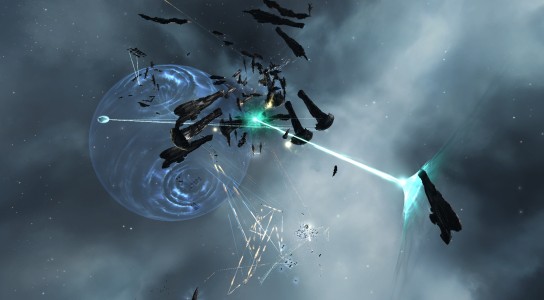 With the titans and supercarriers on the field, the dreadnoughts could do little, the vast majority of them quickly annihilated as doomsday devices were fired in all directions. With the super capital force on the grid, the Circle-Of-Two fleet warped into its midst, safeguarding it as the behemoths slowly burned into the tower’s shields. This, however, left the Proteus fleet of the Imperium unsupported, which led to a large number of strategic cruiser losses as it got pummeled on all sides by the allied fleets, the Pandemic Legion fleet making a recovery and joining the battle once more.

Circle-Of-Two, seeing this unfold and with its super capitals slowly entering the tower’s shields, decided to aid its allies. The fleet had attempted to warp on top of the Pandemic Legion Proteus fleet, only to see the latter warp off as it landed. Regardless it continued to stay on the grid, trying in vain to alleviate the pressure on the Imperium’s Proteus fleet. 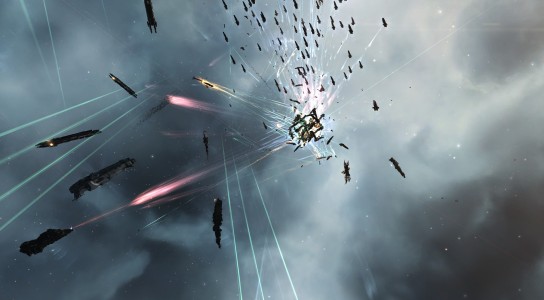 The two sides fought at nearly point blank range with ferocity, exchanging heavy blows. However, it seems that the Circle-Of-Two and Imperium Proteus fleet suffered the majority of the casualties, trading 3-4 mainline ships at a time for each of the Low Sec Voltron one. With Pandemic Legion returning to the field and having suffered moderate losses, the Circle-Of-Two, and the Imperium’s Proteus fleet attempted to disengage, losing a few ships in the process.

With their enemies perched on the grid, the allied fleets turned their attention to the scattered Imperium carriers and dreadnoughts, a large number of whom failed to extract in time or continued to lend help to the Imperium fleets, leading to them being easily tackled by the allies. The allies quickly spread tackle on any remaining capitals on the field and started the task of removing them from the battlefield. 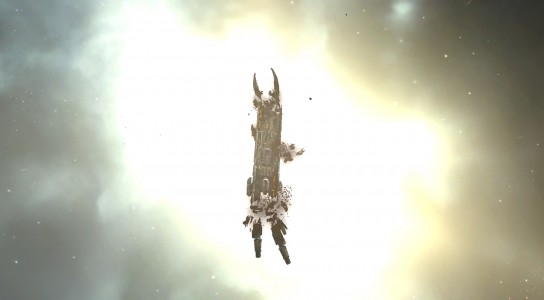 A Get Off My Lawn Archon Carrier in Its Last Moments, Destroyed by the Allied Fleets

One by one, stranded Imperium capitals were brought down by the allied fleets, while their fleets consolidated on the tower. After a few minutes of clearing hostiles around the tower and disposing of most of the stranded capitals, the allied fleets started to align out. Imperium forces prepared to continue the fight, having re-organized and brought reinforcements, but at this point, the allies were exhausted by the prolonged fighting.

Having suffered some losses and the tower seemingly safe, combined with the presence of the Circle-Of-Two’s supercarrier force, the Allied fleets decided to withdraw from the field rather than continue fighting.

Imperium forces for their part cleared the field of stragglers before extracting as well, bringing the battle to an end.

Battle report for the Jan system can be found here.

All told the battle lasted 2 hours with Time Dilation being ever present, reaching 10% at times but often settling between the range of 30-50%. The system hosted for the majority of the fighting more than 1000 pilots.