UJY-HE system, Deklein region. On the 9th of January at 13:00 EVE Standard Time, another battle flared up between Imperium forces and a makeshift coalition of alliances, resulting in yet another moderate loss for the Imperium.

The battle this time was sparked over 25 Chimera carriers which were tackled by Verge of Collapse [CRIT]. The chain of events that led to this incident started with Therabois attempting to ambush an Imperium wormhole collapsing crew.

According to WE FORM V0LTA [GLHF], the Imperium has been employing two crews to collapse wormholes leading from the Thera system into the heart of Imperium space such as the Branch and Deklein regions. Once a wormhole connection was found, a small battleship gang fitted specifically for increased mass would then collapse the hole, thus assuring the safety of the region from marauding gangs. One of the resident groups in Thera which includes WE FORM V0LTA, known as Therabois, has attempted to hunt these crews for quite a while.

This time however, Therabois managed to locate one of the crews at work, quickly dispatching it and keeping the wormhole connection into Branch open. Yet the Imperium crew did manage to decrease the mass of the hole, a fact which would become important later.

With the wormhole secured and a few pilots posted to guard it, the rest of the Therabois gang quickly used the opportunity to strike at the heart of the Imperium’s ratting space and started roaming the Deklein region. Upon reaching the UJY-HE system, the force managed to locate and tackle a Chimera carrier in an anomaly. To the surprise of the Therabois gang, no less than 24 other Chimera carriers both warped to the site and jumped to the cynosural beacon the trapped carrier lit in order to help their tackled friend. 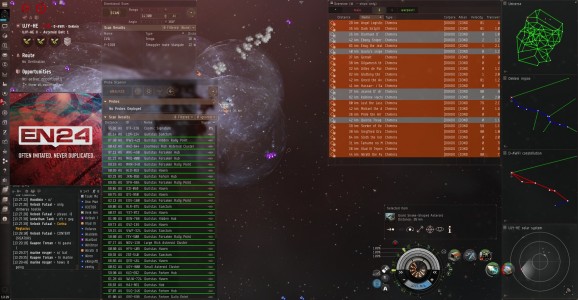 The Carriers Tackled in the Anomaly

With such a large number of carriers on the field, the Therabois gang could not hope to break their tank. Thus, the gang quickly kept the carriers bubbled while calling potential allies. Once more Pandemic Legion [-10.0], The OSS [OSS] and Hax. [HAX.] answered the call, organizing fleets quickly and burning to the system.

Pandemic Legion brought a 90 pilot Sleipnir command ship fleet while The OSS and Hax. formed a joint Cerberus heavy assault cruiser\Gila cruiser fleet, estimated at 40 pilots. The Therabois gang kept the carriers tackled while protecting the Thera wormhole connection at the same time from the Imperium’s attempts to close it, thus allowing Pandemic Legion’s fleet to use the connection in order to get into the action faster.

Once in the system, the allied fleets warped to the tackled carriers and started the long and arduous task of breaking the Chimeras’ tank. The fleets were forced to switch fire time after time as the Chimeras were able to catch their brethren in low shields. However as the allied fleets swarmed on top of the carriers and spread their energy neutralizers on the capitals, depleting their energy reserves and straining their shield tanks and remote repairs, cracks started appearing in the shield transfer wall.

Slowly, one Chimera after the other was destroyed, the energy neutralizer pressure and constant fire switches finally taking their toll. As the number of Chimeras dwindled, the process of their destruction accelerated as the number of remote shield transfers decreased. With no rescue fleet in sight and facing what seemed as inevitable destruction, the remaining trapped carriers self destructed, leaving the only burnt husks for the allied fleets to loot.

Imperium forces were not sitting idle during this first engagement and organized several rescue fleets for the carriers. Though numbers are not certain, Imperium forces did manage to form an Augoror Navy Issue cruiser fleet, a Hurricane battlecruiser fleet as well as a super capital fleet. These fleets burned ahead to the UJY-HE system, not knowing that the carriers had already been destroyed.

The first of the rescue fleets to encounter the allied forces was the Augoror Navy Issue one. Pandemic Legion forces were racing towards the ZKYV-W system in Pure Blind where a wormhole was located that would take them home, as the Thera wormhole had collapsed. The Augoror Navy Issue fleet had jumped into the Sleipnirs as they landed on the U-TJ7Y gate.

The Imperium cruisers quickly anchored up and engaged the Sleipnir fleet, burning upwards from the gate as Pandemic Legion interdictors swarmed over them. The Sleipnirs themselves chased the Augoror Navy Issue cruisers, their artillery cannons firing at the retreating ships. In a quick exchange the Augoror Navy Issue fleet was annihilated, overwhelmed by the firepower of the Sleipnirs and attempting to withdraw yet forced to stay on the field by the many interdictors present. Finally, after suffering heavy losses, the remnants of the fleet managed to escape leaving behind them a long trail of wrecks.

However the reprieve after victory proved to be short lived as Pandemic Legion forces had to contend with the super capital fleet of the Imperium. This force had traveled by gates in order to come to the aid of the carriers, but was quickly intercepted by Pandemic Legion reinforcements in the F-NMX6 system on the ZKYV-W gate, which attempted to slow it down and harass it. Later on allied interdictors would come and keep the force bubbled, thus unable to reach the carriers in time. With the carriers destroyed, the force quickly jumped back to the ZKYV-W system, but was kept bubbled.

Now it stood between Pandemic Legion and its exit, not to mention it was also reinforced by the Hurricane fleet. With the possibility that Imperium forces may attempt to collapse their exit, and with the amount of tackle on the Imperium side being rather light, the Sleipnirs decided to jump into the awaiting Imperium fleets. Once the grid was loaded, the fleet quickly anchored up and started burning away from the gate, attempting to get as far from the formation of carriers and super carriers as possible while opening fire on the Hurricanes which quickly retaliated.

A fierce fire exchange ensued, with Pandemic Legion managing to incur losses to the Hurricane fleet but suffering losses to both the sub capital artillery barrages and the swarm of fighter drones the super capitals unleashed upon them. Unable to tank the incoming damage, the Pandemic Legion fleet quickly retreated from the system, managing to escape through the wormhole and return to its staging.

This marked the end of major hostilities between the two groups.

The Battle from the Perspective of the Pandemic Legion Sleipnir Fleet

Battle report for the entire event can be found here.

All told the battle lasted nearly 2 hours with several breaks in the fighting. Time Dilation was not reported and for most systems the local population was well below 300 pilots for most of the engagements.