BKG-Q2 system, Branch region. On the 8th of January at 21:00 EVE Standard Time, a fight over a tackled Fidelas Constans [FCON] Ragnarok titan in the system led to Imperium forces suffering major losses to a makeshift coalition of null and wormhole space alliances.

As previously stated, the battle was sparked over the tackled titan which was en-route to the BKG-Q2 system in Branch, which serves as the alliance’s main staging. The titan was escorted by a small capital and sub-capital force and had jumped into the 92D-OI system in Venal, on a perch above the MA-VDX gate. Unfortunately for the them, it was quickly scouted by a WE FORM V0LTA [GLHF] gang which had a wormhole exit in the system linking to their staging in the Thera system.

At this point the Fidelas Constans pilots realized their error and started warping assorted sub-capitals as well as a carrier force to the gate. The WE FORM V0LTA pilots attempted to clear as many hostiles as they could while more interdictors were brought in by Verge of Collapse [CRIT] to create a defensive perimeter, making sure the titan couldn’t escape and to prevent more help from reaching it.

While this was going on, several alliances answered WE FORM V0LTA’s call, including a 130 pilot Pandemic Legion [-10.0] Sleipnir command ship fleet, a 100 pilot Northern Coalition. [NC] Proteus strategic cruiser fleet and a 60 pilot joint The OSS [OSS]/Hax. [HAX.] Oracle battlecruiser fleet. These fleets converged on the BKG-Q2 system, the Sleipnir fleet arriving first and quickly engaging the Fidelas Constans forces. By this point the gang had the titan tackled for approximately 15 minutes.

With the Sleipnir fleet on the field, priority was given to clearing any support ships for the titan. The assorted Fidelas Constans sub capitals were quickly driven out, before work was started on the the carriers present. First the Chimera carriers were targeted, as they were in a minority and could possibly help the Ragnarok, which is primarily a shield tanked titan, soak the fleet’s damage. The fleet then changed targets to the many Archon carriers present on the field, however several attempts proved futile as the carriers managed to soak the incoming damage, albeit with some difficulty. 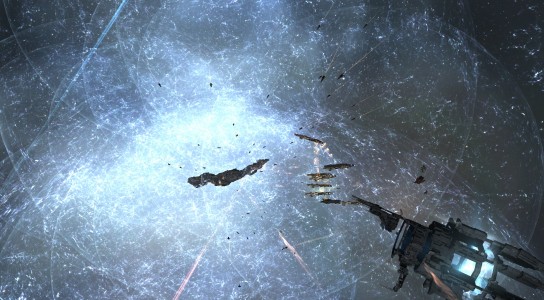 Fidelas Constans, however, did not sit idly by and organized a Proteus fleet of its own to try and save the titan. The fleet quickly warped to the LXWN-W gate and engaged the Sleipnir fleet at close range. However, outnumbered and outgunned by the Sleipnirs, the Proteus fleet was quickly decimated, a large chunk of its mainline ships simply volleyed by the artillery barrages of the Sleipnirs. In no time, the fleet had lost most of its firepower and was forced to retreat.

Whats more, reinforcements arrived in the form of the Northern Coalition Proteus fleet and the joint Oracle fleet for the WE FORM V0LTA gang. With greater numbers, the process of breaking and destroying the Archon carriers became easier, though coordinating fire between the different groups proved difficult at first. With three Archons destroyed and reports of no less than three Imperium rescue fleets formed up and en-route to the system, the allies decided to try and quickly destroy the titan, believing they may have to extract at any moment.

To their surprise, the titan could not tank the combined firepower of the fleet, even with at least a full carrier squadron in remote repair range. Rapidly, its shields were stripped, huge chunks of armor destroyed before it plunged into structure. Upon hitting structure, it took no time at all for the behemoth to cave in to the relentless fire and explode.

With the titan destroyed, the allied force quickly turned its attention to a Fidelas Constans Nyx supercarrier which was also tackled on the gate. The Nyx had warped in to help the tackled titan and now needed to be rescued as well. As the allied fleets burnt towards it, they continued to clear other targets of opportunity, including a Naglfar dreadnought, which were stuck on the gate grid due to the many interdictors now present on the field.

In no time the allied fleets swarmed the supercarrier, cutting it down and destroying it without any trouble. Left with only a few carriers tackled on the gate grid, the allied forces prepared to clear the field and leave nothing behind them but wrecks. Thus started the systematic elimination of all the remaining Fidelas Constans carriers on the gate.

Imperium forces were not idle either, organizing a Hurricane battlecruiser fleet, a Jackdaw tactical destroyer fleet and an Augoror Navy Issue cruiser fleet. Numbers for these fleets are sketchy at best, but it is believed the Imperium managed to muster more than 300 pilots to try and rescue its tackled super capitals. This massive force attempted to bridge into the system only to find out the allies had deployed cynosural inhibitors all over the grid, their logistics wings managing to keep the devices alive in spite of the attempts of Fidelas Constans to get rid of them.

Thus, the fleets were forced to burn to the system via gates. Coming from several different staging systems, this meant the Imperium forces arrived at the scene in a piecemeal fashion and not as one cohesive force, further hampered by allied interdictors which kept several of the pipe systems’ gates bubbled. The first to arrive was the Hurricane fleet, estimated at 100 pilots. It jumped straight into the hostile forces in BKG-Q2 only to discover the two super capitals destroyed and the allied fleets busy clearing the last of the tackled carriers.

Quickly the fleet anchored up and attempted to fight, but being outnumbered and outgunned it was annihilated in a short time, only a few survivors managing to flee the destruction. With the news of the super capitals’ demise as well as the defeat of the Hurricane fleet reaching the other Imperium fleet commanders, the two remaining rescue fleets decided to turn back rather than be destroyed, the Jackdaw fleet literally stopping short of jumping into BKG-Q2.

With news of the Imperium fleets withdrawing, the allied fleets quickly burned down the last of the tackled carriers before looting the field and extracting back to their respective staging systems as well, bringing an end to the fight.

The Battle from the Perspective of the WE FORM V0LTA Fleet

The Battle from the Perspective of the Pandemic Legion Fleet

The Battle from the Perspective of the Northern Coalition. Fleet

Battle report for the BKG-Q2 system can be found here.

All told the battle lasted 75 minutes with Time Dilation spiking at times to 10% and swaying rapidly, even subsiding at times. At the height of the fighting the system hosted 700 pilots.