A freighter carrying an Amarr Factory Outpost Platform has been destroyed in Paragon Soul this evening.

The Providence, piloted by Monicc Annages from Kerge Marha Corp. – a member of the pwn-O-graphy alliance, was destroyed in G1D0-G by a Hole Control fleet.

The Amarr Factory Outpost Platform, valued at 25 billion ISK survived the death of the freighter, with Hole Control CEO Buddy Freep confirming they claimed the egg, which has since been placed on sale at a high-sec market. 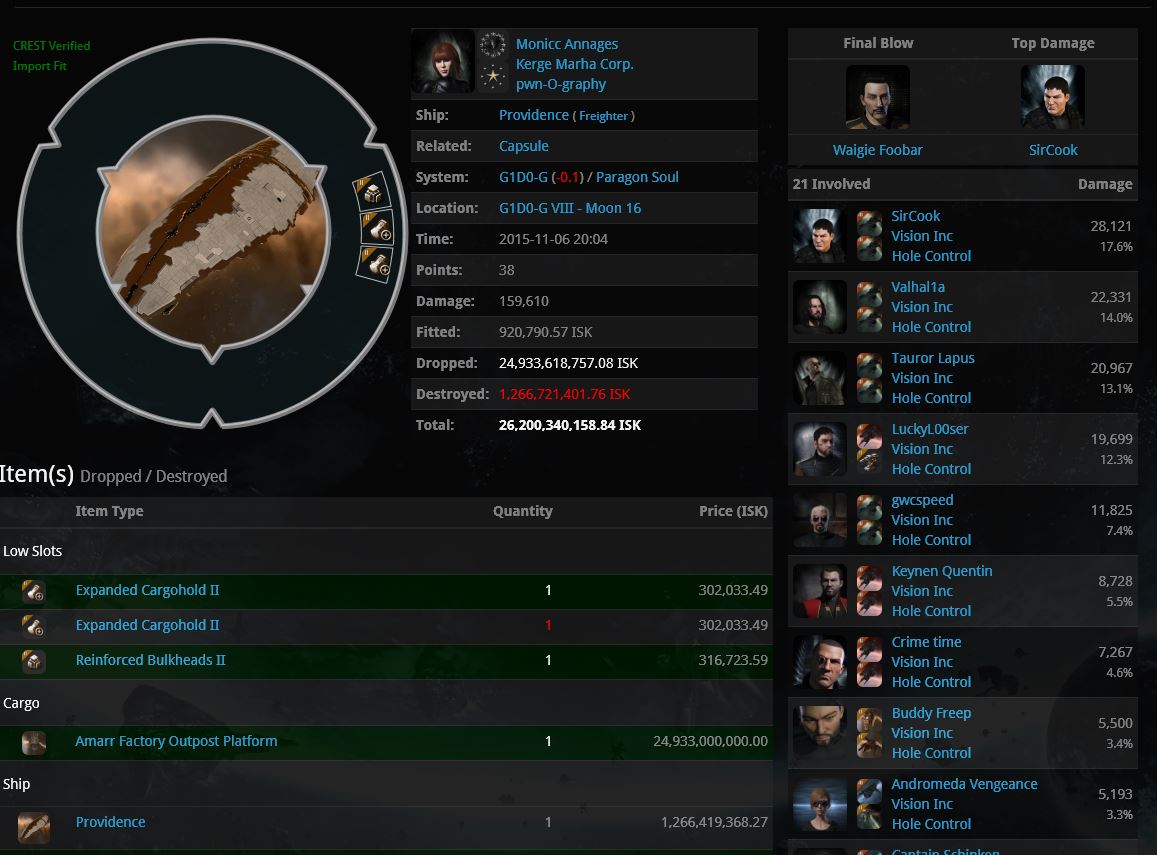 The Providence had been escorted by a small mixed fleet consisting of three Protei, a Cerberus, a Sacrilege and a Falcon. pwn-O-graphy also had a Jackdaw, a Thorax and a Crow on field.

The 25-man T3 gang plus support and logistics from Hole Control were able to make quick work of the rag-tag fleet, losing only a single Sabre.

Our scouts swarmed out and spotted a providence with a small support fleet jumping from high sec to our incoming C5.

We aligned to the null security space exit thinking it will be some easy carebear [sic!] kills.

We tackled the providence in G1D0-G and made quick work of the nine-man support fleet before killing the Providence.

Evidently surprised by the contents of the Providence and with the Hole Control fleet commanded by a “trial FC” added:

In total it was a great kill and nice ISK for our SRP.

The Hole Control CEO singled out the “big balls” of their freighter pilot Ivo Cortes, who claimed the Factory Outpost Platform from the Providence wreck.

Ivor Cortes had to traverse null-sec and wormhole space alone after his Obelisk closed the C5/null-sec connection, trapping the Hole Control fleet behind.

Buddy understands that no members of Hole Control have screenshots or footage of the kill as “it was just a freighter.”

With attempts to sell the egg back to pwn-O-graphy rejected, Hole Control have placed it on sale in Hurtoken.

The movement of station eggs are often a closely guarded secret, construction of the item itself – required to build a new station in a null-sec sovereignty space – requires billions of ISK worth of minerals and items.