Modern science can use cutting edge computers and technology with which to interpret unimaginable amounts of data across all fields. However, despite computers having simply mind blowing calculating abilities, there are certain limitations a computer cannot overcome. In these instances a human eye and brain is needed to analyse the information. Unfortunately, with the vast amount of data and information that can be collected there simply just isn’t enough manpower and funding available to the scientific community to process it all. Crowd science was born from this need,.

One of the most well known projects of this type was run by Sony with the [email protected], which was a distributed computing project which contributed the Playstation 3’s processing power to simulate protein folding for drug design and molecular dynamics assisting in curing a number of disease’s including Alzheimer’s, Huntington’s, and Cancer. But again, it was entirely down to the computer to run the calculations and simulations, there was no human interaction in the process so it was still limited to what a computer can do. So a number of crowd science projects can be found to try and fill this gap.

But even the millions of hours that these crowd science sites work are not enough, there is just not enough volunteer’s with enough time to complete the task. This is because there are billions of hours worth of work needed to make any headway. So where is there a huge resource of man hours that, if cleverly used, could be used to provide that time needed? Jane McGonigal, a game designer presented a solution to this problem back in 2010.

Enter Swiss company Massively Multi-player Online Science (MMOS) which aims to leverage the countless hours gamers playing computer games by integrating the tools required to conduct the research within a game and making it an incentivized part of the game. At EVE Fanfest 2015 Attila Szantner, co-founder of the company made a presentation introducing MMOS to the EVE community. You can see his presentation below.

In partnership with CCP to bring one such Crowd Science project to EVE Online, the compilation of the Subcellular Protein Atlas in the form of Project Discovery to help identify which proteins show up where in the human body and in various different types of tissues. The scientific applications are both very complex and very diverse which will ultimately assist in helping cure all kinds of illnesses. 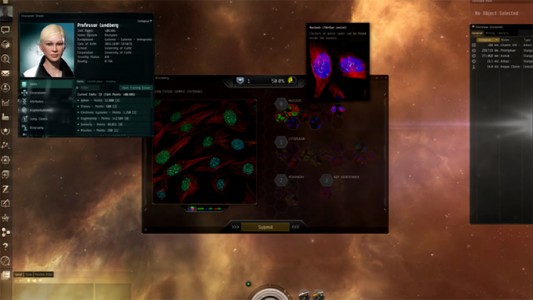 Project Discovery will introduce a mini-game as prototyped above. Players will help identify protein structures in exchange for potential ISK and Sisters Of Eve loyalty point rewards. The interesting part of this is that Project Discovery is not just limited to the identification of protein structures, as it can also be extended to many other scientific applications such as Astronomy.

Project Discovery is scheduled to come to EVE during the winter.

I for one will enjoy spending my in-between fleet time contributing to medical science. The ISK and the LP, however,  are a nice bonus.