Spotlight on ‘A History of The Great Empires of Eve Online’

The history of Eve Online outside the lore element of it is, lets be honest, not that well documented. Most of it is locked in the minds of those people who were members of the varied player alliances that inhabit and fight over the swathes of nullsec space. Many come and go, but only a few test the trial of time and last. Many veterans enjoy sharing their stories over comms. Some put it into writing via the medium of sites such as Eve News 24 and personal blogs. Sadly when these players leave a lot of their stories and experiences become lost forever.

In steps Andrew Groen, a professional freelance journalist with seven years of experience in writing for sites such as Wired.com and the now closed Penny Arcade Report. During his career he was nominated for a 2012 Games Journalism Prize and received a ‘Best News Reporting’ award from Good Games Writing. But more importantly, he is an Eve Online player. So who would be best to take on the role of historian to document the varied and fascinating history of Eve’s great empires?

So in the April of 2014, Andrew launched a kick starter project to crowdsource funding for a new book called ‘A History Of The Great Empires of Eve Online’ (AHotGEoEO for short). On the kick starter site Andrew writes:

‘I’m writing this because there is simply no way for people to learn the history of Eve, and it’s getting more difficult every day. You can spend weeks reading through the Eve wikis, but they are largely incomplete, filled with jargon, and often written by people who are obviously writing a slanted, one-sided version of history. In Eve as in the real world, history is written by the winner, and winners make terrible historians.’

Here is his kickstarter video.

In his interview on pcgamesn.com Andrew talks about how he felt in the lead up to the kickstarter launch:

I had this feeling that someone else was just going to swoop in and take it from me. The analogy that I used to describe how I was feeling to my wife was, ‘I feel like I just sat down at a dinner party to this giant feast. And everybody else is ignoring it. And I’m the only one who knows it’s there. And I’m starting to eat it, and take little bites of it… and I’m just praying nobody else just comes and starts eating it and taking all the food away.

In order to print and ship 1,000 physical copies of the book Andrew needed to raise $12,500 towards the project and on April 26th he pressed the button on the kickstarter site.

Within seven and a half hours that goal was hit – that’s almost $28 per minute. The Eve Community had demonstrated that AHotGEoEO was a project they were, without any shadow of a doubt, completely behind. In Andrews first update only 24 hours after the project started he writes:

I never allowed myself to believe it could go this well. Not even in my private thoughts did I honestly believe I’d receive this amount of support in such a small amount of time.

I couldn’t be more overjoyed to see the support come pouring in, validating every hope I’ve ever had for this project. And then some.

By May 25th, the final deadline for the kickstarter project had raised an astonishing $95,729 from 3116 backers. This has allowed the project to fund not only its original goal, but also provided funding to produce a hardcover version of the book, the  commissioning of unique artwork and a significant upgrade in the production quality.

…the hardcover deluxe version did not exist prior to this Kickstarter campaign. Your pledges are *entirely* to thank for that, and I can’t wait to get to work on creating the best book that I – and my new team – possibly can for you.

Over the following months Andrew kept the kickstarter page updated with the progress on the project.

First steps were to pull together a network of reliable sources and within the first month he had over 60 different sources within the Eve community. Indeed the sheer volume of information coming in from these sources meant that an Editorial Assistant was required to help type up the transcripts from all the interviews. In addition to this there were meetings with the printing companies, interviews with cover artists, map makers, illustrators. The foundations were piece by piece falling into place.

At this stage the writing was probably also the hardest, it dealt with the early days of Eve which was now over a decade ago. But Andrew had some great successes in getting hold of people who were involved in the early days, some of them who have stopped playing Eve for many years. Some of the way earlier alliances played the game also meant Andrew was met with some interesting challenges as he explains in his interview on pcgamesn.com:

A lot of the early alliances were roleplaying alliances. So the way that they played and interacted was informed in a lot of ways by the lore. Stain Alliance were formed before the game even launched, and they were an Amarr roleplaying alliance. I actually got in touch with their old leader, named TRIGGER. And he’s still in-character to this day. He wouldn’t talk to me until I created an alternate character that was Amarr-race. I was a Gallente character prior to that, and he wouldn’t answer my emails until I was the proper race. I swear to God. That’s old school. I don’t know that there are many players around that are still like that. 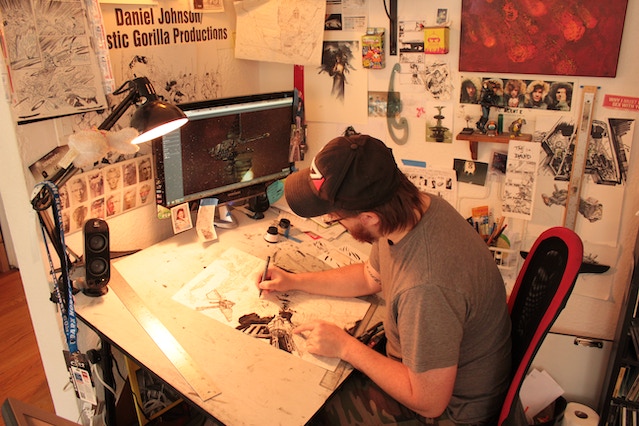 The list of names added to the project also expanded. Artist Daniel Warren Johnson was brought onboard to illustrate many battles. The well known gentlemen pirate and graphic designer Rixx Javix became involved to design the maps. Later on artist Devon Scott-Tunkin was brought on to create oil paintings of the major figures in the history of Eve. Finally artist Andrew Ghrist was brought in to produce some unique and original artwork, which for the time being, is kept tightly under wraps. 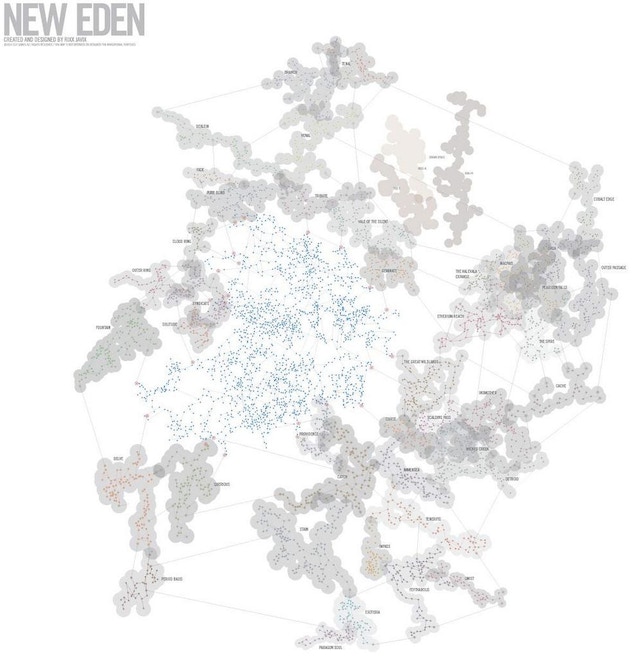 An early draft of Rixx Javix’s Map of New Eden

And of course while pulling this team together Andrew himself was busy interviewing some of Eve’s most legendary players, Jade Constantine, CYVOK, Lallante and Torn Soul to name a few.

But it wasn’t just the players who were fully behind the project. CEO of CCP Games Hilmar Veigar Pétursson and Creative Director Torfi Frans Olafsson also took time to be interviewed for the project.

By September the foundation’s were laid and the writing was steaming ahead. But even at this stage Andrew had hurdles to get over.

I’ve come to discover in my interviews with people who were major players in 2003 and 2004 that the human brain can have an excellent ability to remember individual events even after a decade. However, I’ve found that humans are *awful* at remembering the order in which things happen. The human brain, it seems, is great with memory but has a terrible filing system.

Sources will often recall an event in perfect detail, but be wrong about *when* it happened by entire years. Or they’ll lay out the chronology of a string of events and accidentally leave out 6 months of time between stories. To be perfectly clear, I’m not blaming my sources for this problem or saying they have bad memories. I’m saying they have entirely normal memories. What I mean to say is that this is an inherent problem to historical research that is important to understand.

By the 6th month of production in November almost 67,000 words had been written and the project had gotten out of the less documented old past of New Eden and started encroaching in on the middle history which was more documented with more players that are still active. The speed of writing was picking up. By the time January came round the rough draft of the book had been finished with a total of 110,000 words. 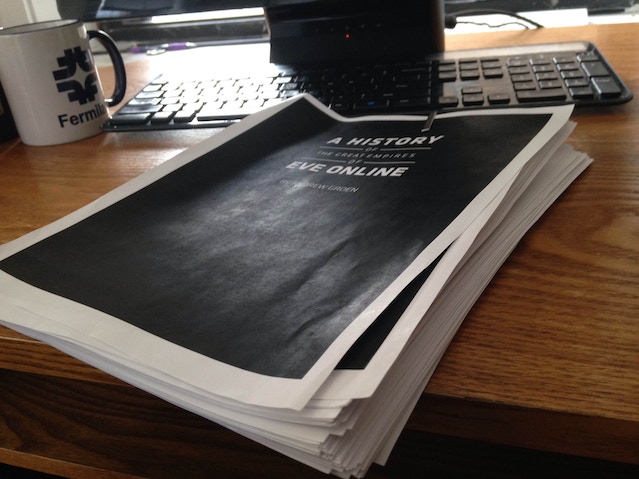 An early draft copy of the book.

Andrew and his team continued for the next few months to edit up and polish off the 110,000 words, pulling each page apart and putting them back together again to make sure it was ready. By July an initial proof had been sent to the factory and on August 29th the first proof copies had arrived from the factory. 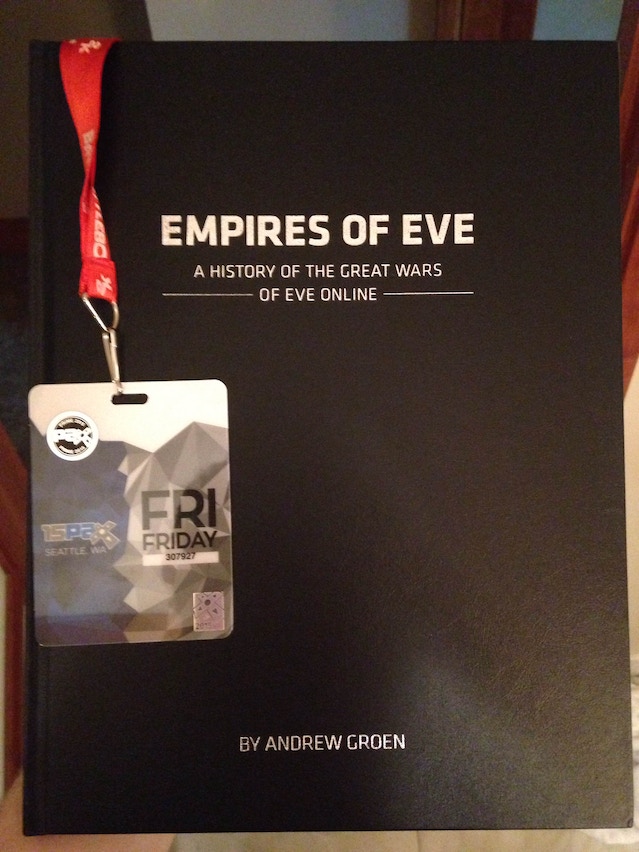 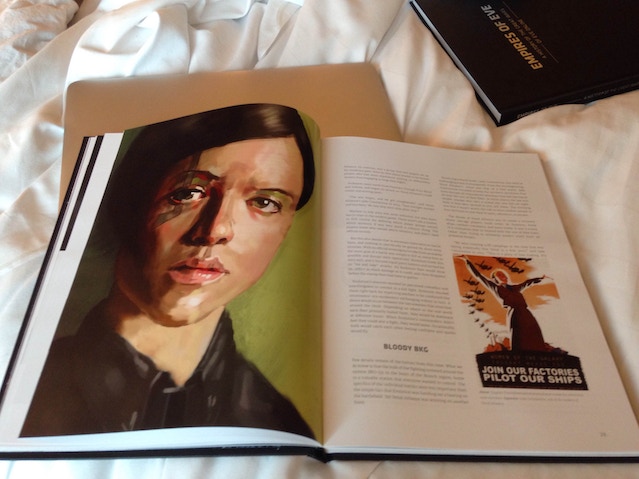 Once Andrew and his editorial team have checked, double checked and triple checked the proofs for any errors the final go ahead will be given to begin printing the final version.

In his last update Andrew writes:

Thank you all for your patience. You’ve all been so wonderful and supportive over the past 17 months. We added some time to the project delivery window by adding the hardcover book, but it was worth it. We’re a bit behind schedule, but the finish line is in sight.

Pre orders for ‘A History of the Great Empires of Eve Online’ can be bought via evehistory.com.