Blood In The Water: 670 Fight Over Sov In Northern Tenerifis

Blood in the water, that’s what reinforcement timers are to pvpers. Like sharks they come from miles away to investigate. That’s what happened in the E-IFSA constellation of Tenerifis. This territory belonged to several different alliances that fall under the influence of Gentlemen’s Club (GCLUB), although most of the region is controlled by The Kadeshi. 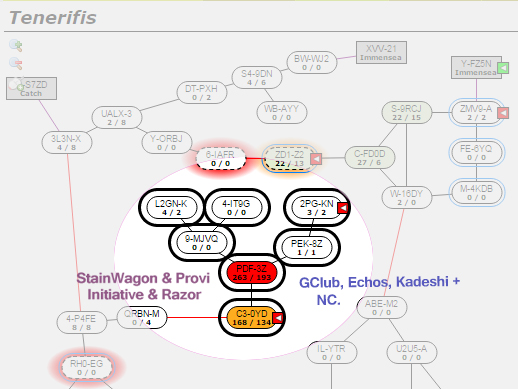 Recently, GCLUB has been raiding Against All Authorities [-A-] holdings in Catch for fun, but [-A-] is still a veteran alliance with long standing ties to pvpers in the neighboring region of Stain. Some of the oldest alliances in EVE come from NPC space, such as Stain or Curse. These areas protect pilots who call non-conquerable stations in those regions home. They can always retreat there and wait out invaders if they lose nearby sovereignty (sov), as has happened many times in EVE history. This is one reason Catch is hard to hold, as it is bordered by both Curse and Stain so only those who carry the blessings of these pirates can live in Catch. StainWagon, a group of alliances that have dominated Stain for ages, consists of mainly Russian alliances (Soviet-Union, The Afterlife and -A-). They were not happy about GCLUB’s incursions into their territory.

After GCLUB’s assaults on Catch, StainWagon turned the tables and went on the offensive to put GCLUB on its heels and relieve pressure on their own holdings. They attacked northern Tenerifis and generated timers for iHubs, a TCU and a station in 2PG-KN. The ticking timers did not go unnoticed, thanks to CCP’s CREST data which allows 3rd-party developers to link to ingame data, resulting in the display of sov information to the public. (DOTLAN, Timerboard).

The sharks began to form and swim in search of the inevitable frenzied fight. Far away in Aridia, Northern Coalition (NCdot) contacted GCLUB to offer assistance in defending Tenerifis. They were friends in the past, working together as part of N3 coalition. GCLUB accepted and offered Titan bridge support to help NCdot travel. Test alliance also formed and moved in to help GCLUB and Echoes of Nowhere, the owners of the constellation.

On the other side, StainWagon, Providence alliances (Provi), and local members of the Imperium coalition (The Initiative and Razor) formed their own fleets. Provi was aided by StainWagon in the past, against PL and the former Hero coalition, so Corebloodbrothers (Provi FC) felt he owed it to them even though they are not formal allies. StainWagon also called upon the Initiative who brought along Razor. Their cooperation with StainWagon dates back many years.

All these predators started swimming around Tenerifis, followed by a variety of pilot fish (the small alliances or corps that feed by their side). 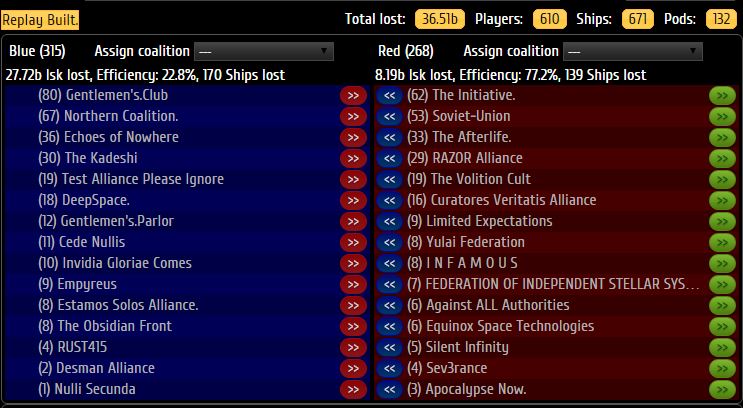 GCLUB and allies brought nearly 100 Machariels with some triage support. Machs are cheap right now (farming the BPCs must be going well) and these fast battleships with hefty firepower are perfect for Aegis sov which favors speed over capitals ships. Initially, as the fleets started to arrive in the constellation’s first system and choke-point, the attacking enemy fleets kept there distance. The speed and alpha volleys of 100 Machs could eviscerate almost anything out there.

As a counter-measure, StainWagon brought expensive long-range missile battleships, Barghests, FC’d by Vurionek of Sovet-Union alliance. The Initiative and Razor brought Ishtars with the reliable damage of their sentry drones. Secretly, NCdot was on its way, salivating at the prospect of killing the expensive Bhargests (800 million ISK, fitted). They flew a Proteus (T3) fleet, which was a good counter to the cruise-missiled Bhargest’s since the T3 cruisers had strong tanks, small signatures, and speed to help avoid missile splash damage. The Proteus is also known to be a good tackler and close range brawler. NCdot flew through a series of wormholes and a Titan bridge, arriving nearby as the fight began. They were standing by, within bridge range, ready.

The mission was to control the constellation and secure the reinforced structures, and the defenders tactical plan was to infiltrate the StainWagon Barghest fleet with a fast cyno ship, light the beacon and bridge in NCdot who would tackle them all and hold them for the Machariels. That was the plan, but the plan didn’t work: A series of miscommunications between defender FC’s left NCdot ineffective and vulnerable.

First, NCdots FC, Poision Kevin, was impatient as his fleet had traveled far and the waiting was dragging on. He knew those Barghests would leave if his secret fleet was discovered sitting on a Titan ready to pounce. Timing was crucial.

The GCLUB FC, Mister Toucher, had a lot on his plate. Commanding Machs, working scouts for intel, placing cyno ships, and also running teams to capture nodes. Under pressure and miscommunication, GCLUB bridged NCdot off the battle grid, near a station (C3-0YD). The Titan bridge-ambush was blown.

Shrugging that off, NCdot set up on the gate to PDF-3Z, waiting for the bubbles to be cleared on the other side, so they could jump in and rush the Bhargests on the other side. NCdot jumped through but were immediately bubbled and targeted. They flew out of the bubbles and purched out of range looking for a warpin near the StainWagon Bhargests. GCLUB Machs jumped in as well but were unable to target StainWagon who stayed well out of range and adeptly used strategically placed defensive bubbles to slow any pursuers.

Seeing two missed opportunities, NCdot FC targeted Provi’s cruiser fleet that was making their escape through the gate leading back to C3-0YD. NCdot pursued them and jumped. Intel stated the Ishtar fleet was still 6 jumps away, but that would prove to be false.

The Ishtars were in system and had dropped a wall of sentry drones at optimal range of the gate, while the ishtars flew to  safe 200k perch. The NCdot FC was zoomed in, calling targets with his overview listing ships by range, shortest to longest. He could not see, nor could his sensor see the Ishtars he thought were 6 systems away.

A flurry of reports came rained in; “Logi down..Logi down… They are breaking through reps. Proteus down! We’re getting wrecked!” NCdot stopped shooting Provi cruisers and took evasive action. Provi had led them into a trap and sacrificed themselves in the process. They were all destroyed, but NCdot was wounded. The entire Provi fleet was worth less than a single Proteus, and NCdot had just lost 20. They also had no more repair ships. The sentries had vollied logistics and then the T3’s.

“We went into the Barghest fleet, no success, jumped back to kill Providence fleet – “Ishtar fleet is 6j out” I was told, and when fighting 45 Ruptures/Caracals and dieing you start wondering… Turns out ishtars were setup on the side we entered from when we went back to shoot providence. Not knowing I was distance down and zoomed in by now already on grid, completely missing the not-supposed-to-be-there-yet fleet” – Poision Kevin, NCdot Fleet

The Macherials jumped in to help NCdot and chased the the Ishtars off away. The sentries, with their hosts gone, went offline and became harmless.  NCdot and GCLUB regrouped at the gate to assess the situation:

NCdot opted to stick around in an attempt to salvage the operation by killing some of the Barghests. Time ticked away, moral was low, frustration high. NCdot killed a Test Alliance pilot (there to help GCLUB) that was looting and almost killed a second.

Finally as NCdot was about to jump in and try to tackle StainWagon, but the Mach’s, again, moved in too early and the Barghests warped out. NCdot’s FC, Poision Kevin, frustrated at the missed opportunities, withdrew, apologising to his fleet.

GClub and friends accomplished their mission and withdrew, although the defending Echoes of Nowhere fleet was wiped out early on before any support could help them. StainWagon and friends (the attackers) slowly filtered out, counting their killmails on the way home. They disappeared back into the darkness they came from, but will return when there is more blood in the water.

CCP Fozzie said on EN24 podcast that the general strategy of sov remained the same, control the battlefield and you win the day. This is true, however in this case the defenders didn’t hold the field, they only controlled the gate. Note the constellation had only one entrance. It helped that the structure owners were from different alliances, allowing entosis efforts to be spread out among groups, instead of waiting on one alliance to save multiple structures.

In a campaign where there was a serious effort to take over sov, you might have seen additional strategies used, like blackOps infiltration or interceptor gangs rushing past the blockage.

It is more dynamic. It’s no longer (hold this one grid) i.e. station/ihub/SBU. It’s, maneuver an entire constellation. Out maneuver enemy fleet, catch entosis ships, catch counter entosis gang. It’s fun if you play it the way its meant to be played — Gentlemen’s.Club FC, Mister Toucher

At one point, A Test pilot was weary of an NCdot interceptor that came too close to him as he was trying to loot, so he shot it. His name was Xavier Muvila, a writer for EN24. The NCdot interceptor flagged Xavier’s Svipul, and the FC allowed pilots to lock, disrupt and web the Svipul, but not shoot it. Unfortunately, as the day was chaotic and unfulfilling for the NCdot pilots, they one-by-one, put a shot into it until the small ship exploded. One of the shooters, you will note, was Tiberius StarGazer, and editor for EN24. 🙂     Killmail