RMT is the act of trading real money for ingame currency.
Botting is the automation of gameplay to generate in game currency.

As a reporter I covered real money trading [RMT] in 2010, when rmfHorus confessed his RMTing and methods to EN24 in a three part series. He claimed to have bought a house in Italy from the proceeds. RMTing was a wide spread problem back then and the massive outcry from the playerbase forced CCP to act. They unveiled the “unholy rage” campaign aimed at botters, and by extension RMT. Since then CCP has routinely banned suspected botters and maintained order, quieting the player complaints with the exception of a few anti-RMT crusaders, like The Nosy Gamer blog and EVE-Radio personalities; Wiggles and separately, Big Country.

Most recently, there has been a “eve-media” push to force CCP to apply their rules concerning RMT to the new world of broadcasting and streaming. The fact is some streamers can make money through Twitch or Youtube by collecting enough subscribers. To leverage the viewers into subscribing the streamers offer in-game items as prizes to subscribers only. CCP has now moved to clarify their position, again:

Use of in-game assets for subscription-only based prize draws and incentives constitute real money trading (RMT). This is against our policies. – Monetization of Videos and Streaming Policy.

RMT is only a problem for games that have an exchange rate with the real world. EVE’s exchange rate is roughly: 65 Million ISK : 1 US Dollar.

If you are grinding NPC’s in Nullsec it nets you about 20 million per 20 minute tick, which means a free month of subscription time (through PLEX) costs about 15 hours of grinding. If grinding ISK were a job you’d be earning $1 per hour, not a good return on investment.

There are passive income streams as well (planet mining, market trading, R&D agents), but they take setting up, maintaining, and risking ISK. The point is 1 person on 1 account cannot make enough to make RMT worthwhile, especially where RL countries are stable against the US dollar. 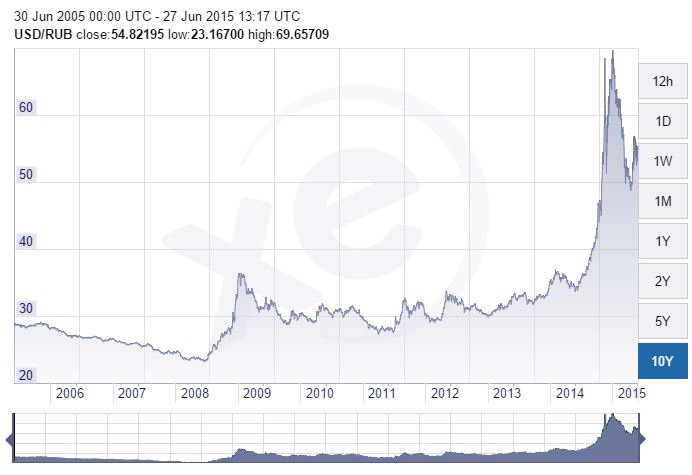 US Dollar to Russian Ruble Chart

In an isolated view, the unstable exchange rate between US and Russia in 2009 made grinding ISK and RMTing more attractive for Russian players than in previous years. That’s pretty much when the drone region gun mining was at its worst. Eventually, CCP cracked down by changing out the loot dropped by NPC’s.

Right now it is really attractive to grind ISK, which might explain why a Russian group’s moved into renting C6 wormholes to grind vast ISK fortunes to sell, but that’s a different article (coming soon). If you can use time to earn ISK and get dollars in return (now worth 3x more than it was in 2008), that might look attractive. But there are a lot of moving parts (Plex exchange rate vs real world exchange rates), but lets assume 1 account cannot make RMT profitable.

To sell ISK you need buyers. EVE’s player demographics are older men generally employed in technology, a good paying sector. Generally speaking, they are more likely to have a surplus of money rather than time. Since EVE players see the game as a hobbie, putting money towards it is logical. After all, some players plan vacations around Fanfest and EVE Vegas.

Players tend to be open to bending rules and gambling. The black market is alluring to them. Interestingly, gambling disorders hit the same pleasure sensors that “process” addicts do (but that is another article, sorry). In a game where alts are disposable, IP addresses can be hidden and so forth, players find ways to transfer large amounts of ISK through various alts, over time. They study what is logged by CCP and what is not and determine safe methods of transfers. Its a cat and mouse game and EVE players love to outsmart their competition, even if it’s CCP.

This sets up an unusually friendly sellers market and there are many reasons to buy. Most players would forgo the black market and buy ISK through CCP (via PLEX), but when you are buying an expensive ship (Titans cost $1,400-1,800 Supercarriers cost $400-650, not to mention unique and prestige ships), a meager -10% off the price would make a real world difference. Note this site’s exchange rate: 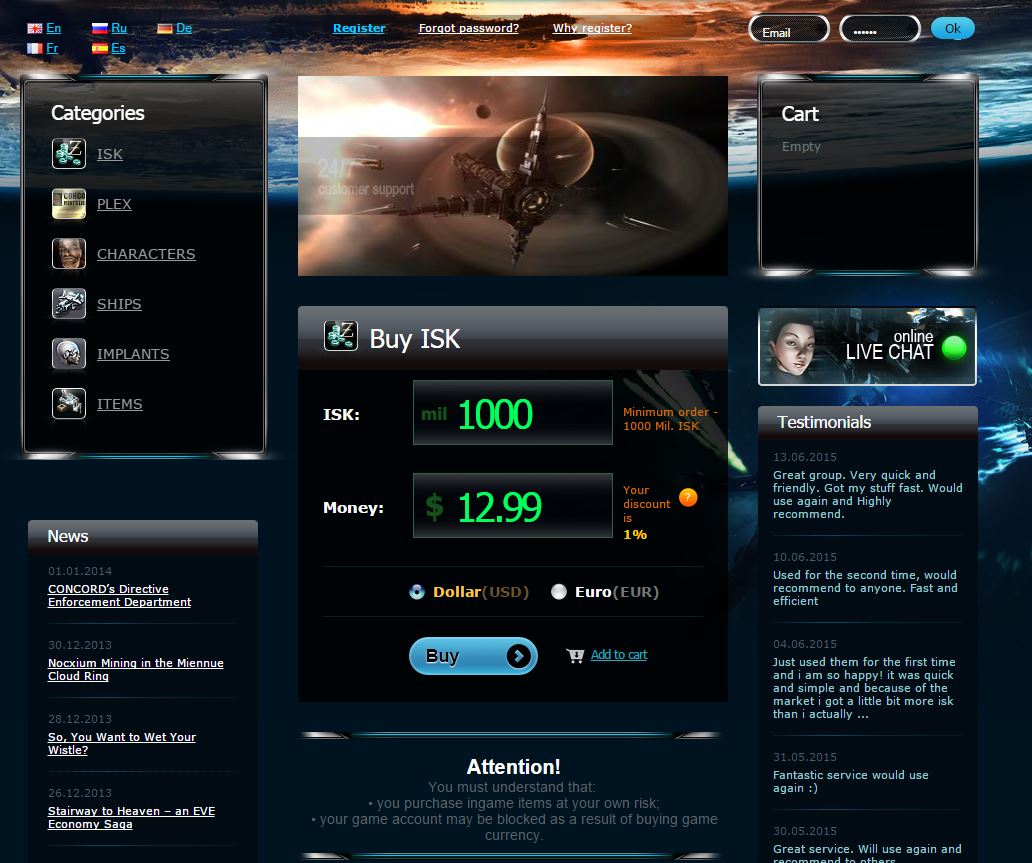 Black market exchange site (name withheld, no linking to it from here). The exchange rate is 1 billion isk per $13, better than CCP’s rate of 950 mil per $15. The black market is pegged to CCP’s rate and will always be lower (or a better deal).

The market is there, but how do you generate enough ISK to make it worthwhile?

EVE scales very well. Advanced players multibox, playing several clients all at once, bypassing CCP’s group based game design. Solo pvpers, are seldom solo. They are supported by booster alts and backup ships to get the solo PVPer out of a jam (reduce risk and loss). “Elite” fleets have bomber alts and capital alts on standby in case things escalate, and they use spy alts regularly to predict enemy fits and tactics. Not long ago, an entire bomber fleet could be run by one player.

Many players multibox to reduce dependence on others, because you can’t really trust anyone in EVE (especially to log in on time). The advanced player takes a “swiss army knife” approach to EVE, having an alt for any occasion. This is why character sales thrive, and CCP supports it with its own official forum; character bazaar.

With alts a player may be earning $4-8/hr, but those accounts have costs of their own. It’s still not a good return on investment, especially with RL time limits. Everyone has to sleep.

To grind enough ISK to make RMTing worthwhile you have to take the game to a different level. Outlawed, botting software can grind ISK while you sleep and with just one account effortlessly do the 15-hour grind to pay for the account, after that it is all profit. Add multiple accounts and EVE’s scaling ratio and you get big ISK returns. In 2010, rumours that Russian coders had discovered a way to bot through EVE without the HUD, which meant any old computer could run dozens of clients effectively. That rumour fuelled the “unholy rage” campaign to eradicate botters.

The most effective way to generate massive wealth is to use other players to build it for you. Corp and alliance thieves, scams, pirating practices are in a way crowd-sourcing. All of them, time-honoured traditions in EVE. The dutiful corporate logistic pilots that fuel towers and retrieve harvested moon materials take a small cut for their private building needs. CCP endorses all this behaviour, otherwise CODE’s high-sec docking rights would be revoked, siphoning units would never been created, and we would all trust each other.

Even successful corporations and alliances are crowed-sourcing revenue. Holding territory, renting to others, moon mining; all require other players to do the work. The wealth of player empires is held in a black box, visible to leadership, whose accounts are PLEXed, skillbooks bought, ships subsidized, etc. To be fair, they provide PVP content.

Ship replacement programs (SRP) are needed during heavy war campaigns, but what becomes of the ISK during slow times. At the top of their game, some AAA leaders pillaged the SRP fund for RMT. They were not the only ones.

Finally, gambling websites are top level ISK generators. There is a reason casino’s are big business. They are closely watched so RMT through this is very risky so any attempt to profit needs careful planning. There is little information on EULA breaking activity since CCP handles violations as private matters.

RMTing and cashing out other people’s investment aggravates them. That is saying something in a game that rewards aggravating people by taking what is theirs. Everything in EVE tells you to get ahead by any means necessary, except when it comes to RMT, that coin belongs to Cesar (CCP). Player investments of time, expertise and cash stays in EVE. Even tournament winners are paid in ISK, ingame items, or PLEX, unlike other games where top players win RL$.

Other games similar to EVE, where the players are the content, allow you to transfer ingame investment to RL$. Second Life‘s Linden* Dollars (L$) have a sanctioned exchange rate, while Entropia Universe has Project Entropia Dollars (PED) which has a bank you can transact with. This means you can earn money in-game to sell for RL$.

If we are the content why aren’t we paid to play? It turns out you can be paid to play, by streaming. Twitch will pay you for drawing in crowds so they can advertise to them. Without EVE you have no prospects. CCP will rent you EVE as an entertainment platform for your viewers, but you cannot give away in-game items to generate income (through “follows”). It’s a far cry from direct RMT.

Some players object to any strand of profit making through EVE because this is a game and all the commodities within it belong to CCP. When you pay RL$ for time to play, you are essentially using a gym. You can use the place but can’t sell their equipment, even if you built or modified it.

EVE is a good investment and has a player-base that can innovate ISK grinding methods, while on the other side of the coin, risk their accounts to cut corners by buying ISK through illegal 3rd party RMTers. There are incentives on both sides of the market to make this a logical practice.

Even if RMT is consistent with EVE’s ethos, it is banned for security reasons. No one wants an international crime wave associated with hackers melting down players assets for dollars. EVE is real, but only so real.

That’s the given reason, but the community outcry is not about security issues. The tortured technicality of selling Twitch your gaming experience, while not luring followers using items is thin. Yet the community members behind the pressure to force CCP clearly identify this as rule breaking is very EVE: Players are outplaying CCP. In doing so they are grinding the one currency that rules them all; reputation.

*Incipiently, Linden Street is Zurich, Switzerland (financial capital of the world) is the street the ancient (Roman) money exchange sits on. I stumbled onto that while traveling.

*updated: Linden Dollars L$ are not named after the ancient market square in Zurich, but instead after Linden Labs, which was named for Linden Street in San Francisco, which carries a botanical name. Thanks for the correction JimPurbrick.