June 2nd arrived very quietly as most of the important sovereignty mechanics were delayed 7 weeks. Since the effort to “unsolve” null-sec was launched on the first 07 show on Sep 25, 2014 (33:30 minute mark,) since then players have taken a wait-and-see approach, putting their long-term plans on hold.

The first wave of changes was dramatic, restricting jump portal travel with a fatigue mechanic. This considerably slowed alliance’s huge capital ships, making it difficult to get them to the “big fights.” Long ago a system would crash and disconnect players if too many piled into a single system. The risk of losing your expensive supercapital ship was a deterrent. CCP fixed the problem with ‘time-dilation,’ also known as ‘tidi,’ a technology that slowed the game to as much as 10% normal speed to let the servers work through the data during giant fights. The result was bonus time for players to log in and get to the fight. Alliances blobbed so CCP made jump fatigue to slow down the giant ships.

Jump fatigue shifted alliances towards wormholes to get to Thera, a crossroads in w-space. From there they could quickly traverse the New Eden cluster and arrive in time to support allies for important fights. Even non-sov-holding entities like NCdot would take a few systems just to put up structures that promote wormhole spawning.

The second wave is a complete re-imagining of the sovereignty mechanics announced a few days ago, on June 2nd. The majority of changes were pushed to mid-July. The null-sec community has been grabbing any piece on new information to make long-term plans, but there is not enough. Most alliances have positioned themselves in what they assume are favorable conditions and gone dormant.

The third wave is no longer talked about. Any changes after July are considered third wave. However the re-imagining of structures, capital ships and corporation mechanics coming later this year are highly anticipated and take the place of the third wave as far as players are concerned.

Up to now, most coalitions have sold off territory they don’t want. The great coalitions of the CFC (now reformed as Imperium) and N3 (now dissolved and scattered) fought over common borders. In the north, Triumvirate and Black Legion. tested CFC borders before moving on to attacking other areas of the map. The Hero Coalition fell under pressure from Pandemic Legion‘s relentless farming. Legion of xXDeathXx formed a new coalition in the drone regions. Russians in the drone regions, some things never change.

EVE has been in constant war for months, but the great campaigns of the past are missing. Without knowing what you are fighting for there is no mission, and without a mission fighting is just practicing. Veteran players need purpose not practice, so some have been waiting for the new mechanics to shake out. Supercapital fights have mostly been ganks on lone supercapitals, usually old players returning to the game.

In this backdrop, Goonswarm dispatched a harassment group called Reavers (a nod to the FireFly TV show,) that were meant to be marauders in east Querious. They were something fun to keep pilots occupied but they surprised themselves at their success. NCdot, the owners of Querious, failed to put numbers in fleets and appeared to be a sleeping giant. They sold off their territories and moved away, cutting all ties with the coalition they led, N3.

Months ago, the CFC (Imperium) beat N3’s Darkness. Alliance out of Delve and the marauding Reavers put down roots and settled in the strategic ED-L9T system. ED-L9T is a natural stronghold for them, sitting only 4 jumps from their high-sec staging system, Badivefi. Reavers could stage in high-sec because they did not use capital ships. They could also retreat to safety since a war declaration against Goonswarm would be very expensive to maintain, considering the fees to maintain the war increase as the target gets larger. Large numbers of Goonswarm Reavers were able to use cheap ships to great effect, resulting in unexpected but welcomed gains in the area. They made their forward operating base ED-L9T and took other important stations as well; 60M-TG and the coveted center of the region, 9CG6-H. 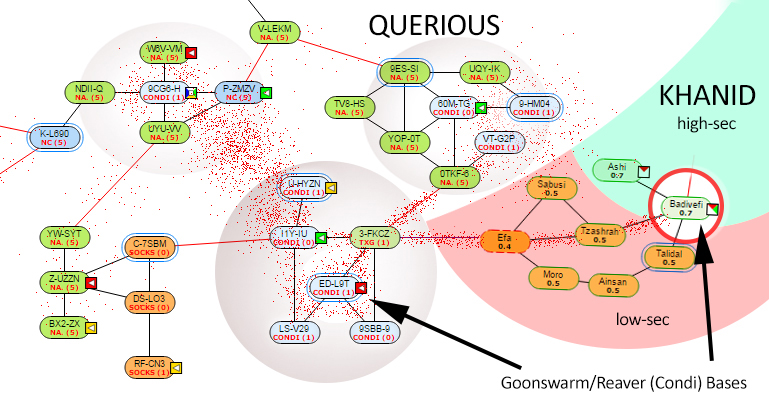 Meanwhile the greater CFC (Imperium) membership, grinding down Delve, were exhausted. They refused to continue to Querious, since they were not keeping any of the regions anyway. Without resistance, taking sov is very boring and slow. Darkness. fled Delve, regrouped in low-sec and moved into Querious. They took over the whole constellation 8ET-D1 and attacked 9CG6-H. They took it May 8th. System after system fell until the Goonswarm’s Reavers were pushed back into the LI-BA0 constellation, with ED-L9T as their last base in the region. 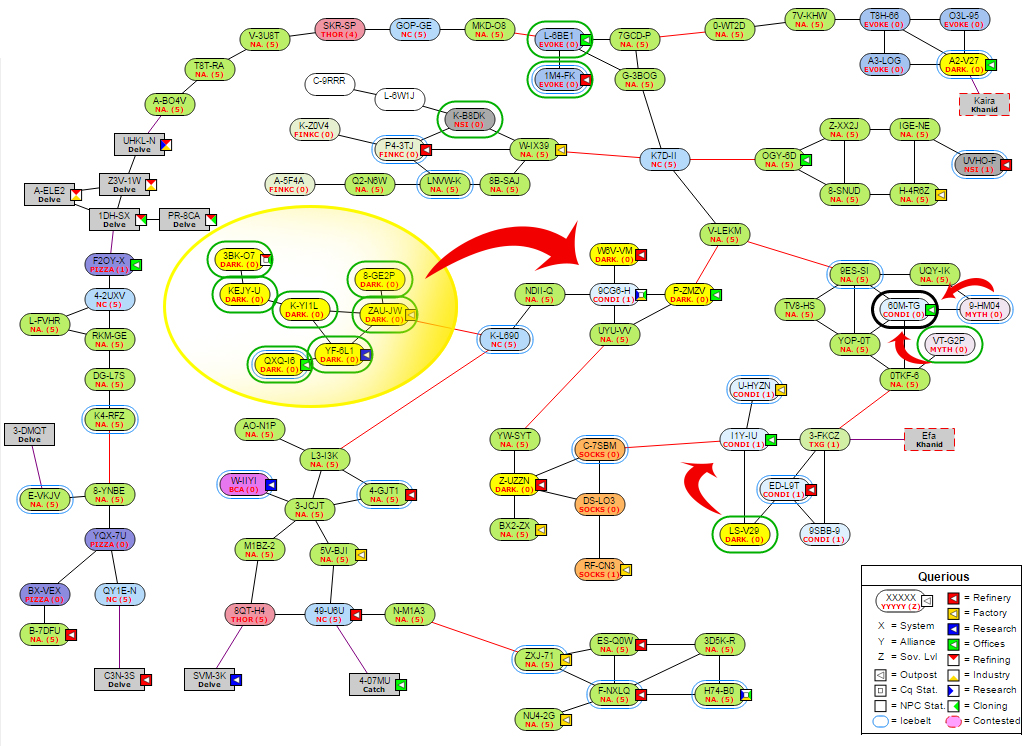 May 5, 2015, Darkness and Allies march on Goonswarm Reaver positions

On the west side of Querious, the CFC allies were still taking systems near NPC Delve space, but Darkness. decided to focus on clearing out the internal territories. The west could wait. In roughly a month, Darkness. took over most of Querious and pushed Goonswarm’s Reavers back to ED-L9T, their last system.

This battle fell on the heels of a previous fight in neighboring I1Y-IU [as reported here,] where the CFC (Imperium) lost to Darkness. and allies. That fight was a third the size of ED-L9T, but still cost Darkness. tens of billions in destroyed ships. Both sides stepped it up for the final showdown fight that marked Goonswarm’s final grip on Querious – both sides. The CFC (Imperium) sent reinforcements to force a large fight. Darkness. and allies were helped by the enemies of their enemies; Black Legion., NCdot and former N3 coalition members. Pandemic Legion also joined in the fight to kill everyone (except their longtime friends in NCdot.) 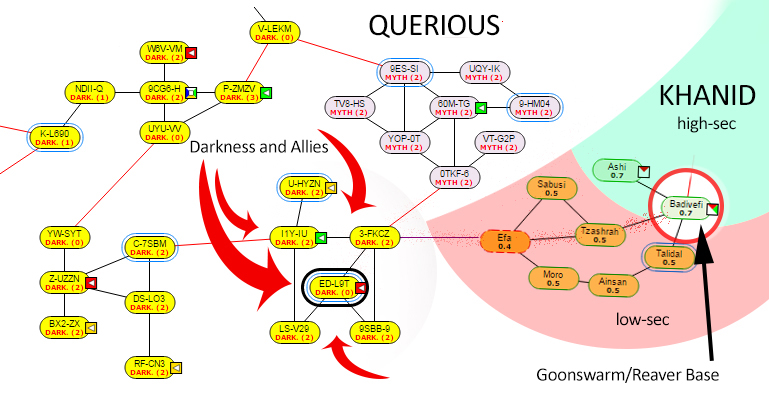 June 6 2015, Darkness. and Goonswarm, both with allies,  fight for ED-L9T. Darkness. takes the station.

Nearly 1,500 pilots (580 CFC vs 600 N3, 250 third party) piled in to fight each other or pick off easy targets. The objective for Darkness. was to take the station from Goonswarm at all costs. The fight lasted roughly three hours, with much of it spent in the throes of 10% TIDI. Many pilots reshipped and jumped back in for more, resulting in the destruction of over 2,000 vessels.

Darkness. committed many dreadnoughts and triage carriers to burn the station down as fast as possible. Their allies brought sub-capitals fleets. Travel by wormholes necessitates smaller ships so the go-to ships are strategic cruisers – T3s. NCdot, Black Legion. and Pandemic Legion all brought T3s to the field.

The CFC (Imperium) brought various fleets, but mostly Ishtars, aided by bombers, destroyers and some battleships. The Brave Collective fleet appeared to be on the CFC side and brought mainly target-breaking frigates which were used on Darkness. capitals to great affect.

Initially, the CFC (Imperium) bubbled the station to prevent quick movements around the station. Then they undocked their repairing capital ships and started to fix the broken station. The fight was on, and the CFC were off and running. Darkness. sent in the pre-positioned dreadnoughts. Allies of both sides targeted each other’s ships and the brawl was on.

The dreads were bringing down the station much faster than it could be repaired. Using wonky Dominion sov mechanics, the CFC decided to stop repairing the station and start shooting it. SpaceMonkey’s Alliance caught the final blow which awarded them the station, but the territorial claim units were mismatched so the station was immediately vulnerable again. Darkness. had to fight a while longer but did, and eventually won the station.

The cost in dreadnoughts and carriers and other ships was over 100 Billion ISK. Their allies suffered an additional 20 billion in losses. The CFC only lost a third of that.

By most accounts, it was a fun time. The CFC side got to kill dreadnoughts and carriers, while the Darkness. side earned the station.

PL was shooting Darkness, as they had for the previous 2 months. It is supposed they were hired by CFC to do so, but that is not confirmed.  Also Brave Collective were said to have made a deal with Darkness, but ultimately betrayed them and interfered with the take over of the station.

The fight for ED-L9T attracted rivals to battle, like times before, with a little something at stake. It was a big end to a short campaign. Goonswarm didn’t want that sov anyway, and Darkness. didn’t want those dreads and carriers. Both got what they wanted.

Darkness. is now ready to focus on the western part of Querious. 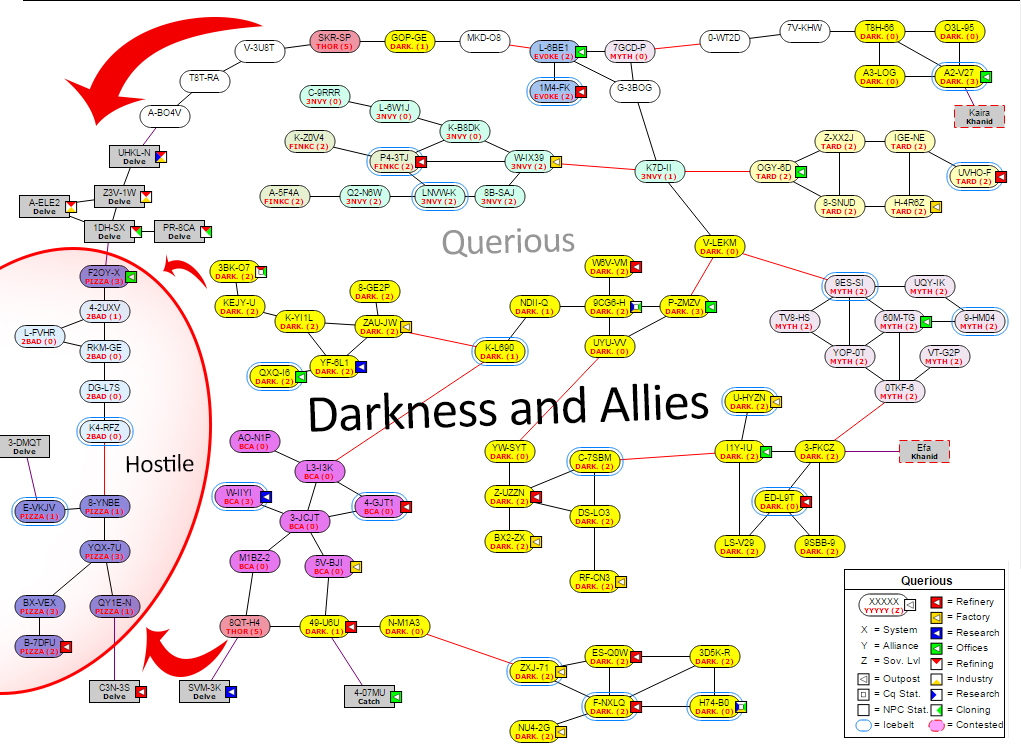 June 8 2015, Darkness. is a step closer to consolidating Querious.

The true importance of the fight was that it may never be seen again. Dominion sov’s style of fighting is coming to an end: 1500 pilots in one system, running at 1/10th speed, with backwards mechanics that allow a defender to capture a station from himself. They will be missed.

Something that is not changing is the supremacy of the cruiser class ships. Heavy assault cruisers and strategic cruisers are fast, well-tanked and can put down solid DPS. This is where the future of constellation control will probably start.

Black ops may replace titans as mobile fleet movers for bomber squads, bypassing camped gates. Battleships may serve as station sentries, undocking to kill any ships trying to shut down services or take over structures. Where it goes from there, nobody knows. New strategies and doctrines will emerge as players see what other players do.

Large fights will still happen, but they will look a lot different. A single streaming view or recorded video won’t tell the whole story. We may very well end up looking at realtime sov ticker boards to see whats actually going on in a fight. Killboards will have to adapt to stay relevant, maybe finally including other types of data like logistics or entosis capture stats. News reporters will have to interview, new jr FC’s that are out taking care of their part of the mission.

All that is just fine. The hope is EVE will be the funnest game you didn’t have to read about, because you were there.