As part of the ongoing module tiericide efforts we are making some consolidation and balance changes to armor plates and shield extenders.

In general the principles being followed are as for module tiericide as a whole:

Specifically the pattern of changes for both armor plates and shield extenders aims to:

Remove the clearly superfluous ’50mm’ and micro’ size categories.
Consolidate ‘Named’ modules from meta levels 1-4 into two variants within meta level 1 – a ‘compact’ variant and a ‘restrained’ variant.
Maintain the general positioning and power level of Tech II variants in the families.
Place ‘Storyline’ variants in a place that is somewhere between the ‘compact’ and Tech II variants in terms of relevant stats.
Significantly enhance the appeal of ‘Faction’ variants with substantial relative easing of fitting and increases in bonuses, while maintaining relatively low penalties.
Establish diversity within the ‘Faction’ variants by adjusting stats in broadly in line with thematic notes as far as available tuning allows.

The case for removing the 50mm plates and micro extenders respectively was fairly clear. It also seemed reasonable to double up the HP bonus of small shield extenders to open up more use cases for them compared with medium extenders. The case of plate size groupings is more complicated due to the greater number of options that exist. There is an argument that 100mm plates remain something of an oddity but for this pass we have decided to eliminate the obviously subpar options represented by 50mm and micro modules and see how matters develop.

Rather than blast a series of densely packed numbers at you in text form, the changes can be viewed in the following sheets: 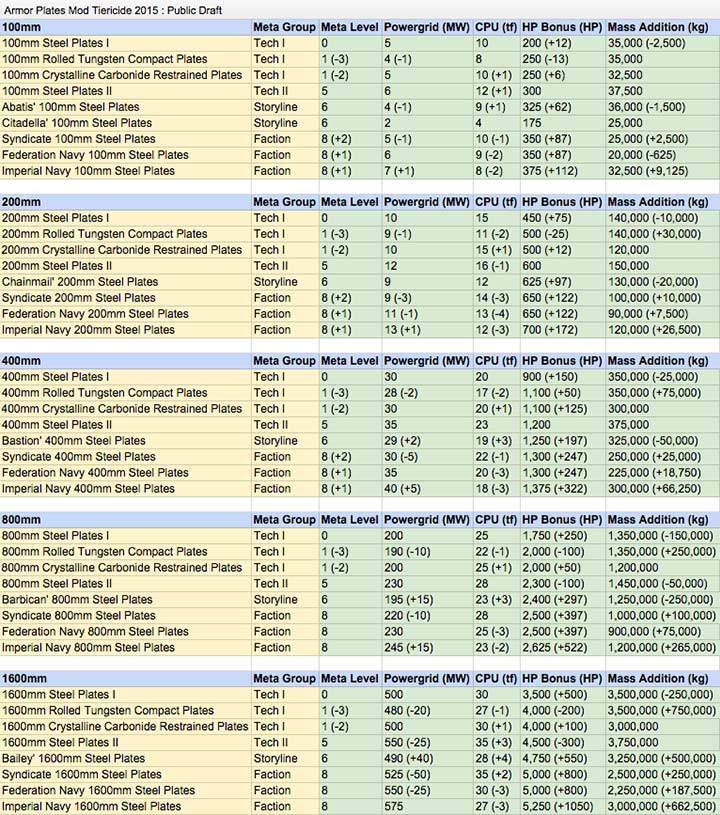 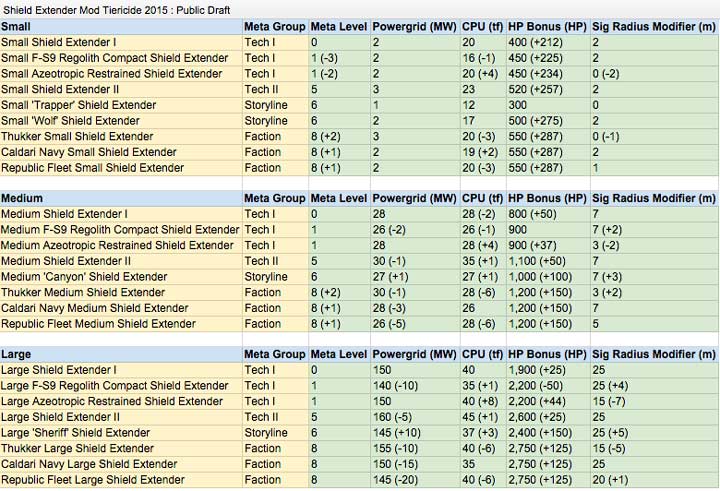 Some merging of modules will take place as a result of these changes.

All existing 50mm plates will be changed into a special ‘Storyline’ 100mm plate designed to be very low fitting, low bonus, low penalty. The same will hold true of Micro shield extenders, as they will merge into a Small extender following a similar stat profile.

With regard to blueprints, we will update the 50mm blueprints to 100mm plate prints. As there are BPOs they will be updated to the equivalent 100mm variants.

There are no micro shield extender blueprints with the exception of the existing storyline module print and that will shift to its new 100mm incarnation.

Aspects of naming have necessarily changed to reflect the changes, with the balance of flavor and information in naming conventions that has been settled on with previous sets of module tiericide changes.

As a reminder the meta module signifiers used for these changes are:

The sources of modules will remain the same in terms of loot drops, LP stores and so on.

These changes are planned for the June 2nd release and are currently available to play around with on the Singularity test server.

Please let us have your feedback or questions regarding these planned changes.