Confessions Of A Trader – “You Are Blue To Us Right?”

I’ve been ‘testing’ the Eve markets for a lot of years now. It started off as endless trial and error over months and years simply to figure out how to eek out a profit, and with perseverance it slowly but surely evolved into refined trading systems which were then pushed to their limits. However as time went on and the liquid isk balance increased I didn’t limit myself to testing just the game mechanics, I intentionally extended my ‘research’ into pushing the limits of what other players would accept.

It’s a market economy after all, and the market is always right. Right?

So in 2010 or thereabouts I found myself as a null-sec noob learning the ropes in what was the Northern Coalition, based in and around Tribute… the heyday of Morsus Mihi and friends.  While I did develop a healthy addiction to the thrill of small-gang and blob PvP, and spent more hours than I care to admit sitting my Command Ship on a Titan. Not what I went to null-sec for.

I went to null-sec to make isk, bulk isk, plain and simple.  My liquid isk from trading in highsec had recently made it into eight figures, tens of billions, and I was eager to see what I could accomplish in zero security space so far away from the safety of the main market hubs.

In my experience, where there’s been some attempt at regulating market prices in null-sec it’s usually been anywhere from Jita+10 to Jita+50.  Meaning that whatever a trader bought an item for in Jita (or the going price in the closest main hub) the ‘powers that be’ expected market players in the alliance to limit their sell price to ten percent, fifty percent, or whichever percentage was dictated, above what they bought the item for.

Well… my average range for highsec was already between fifty and one hundred percent markup, values readily accepted by the market.  Due to lack of game experience at the time I wasn’t aware of any limits on prices in null-sec (null-sec market regulation is actually quite rare) or any general market expectations, so items up to approximately five million isk Jita price I listed at a minimum of between one hundred and two hundred percent markup in populated 0.0 systems.  These items sold, and they sold well. Items above five million isk were generally marked up by between fifty and one hundred percent.  These also sold well.

I catered to all the things I saw people doing in null-sec and it wasn’t long before my income in zero security space was significantly surpassing my income from high security space. Jita+200 was working well for me and I started to ponder to myself just how far could I push it… 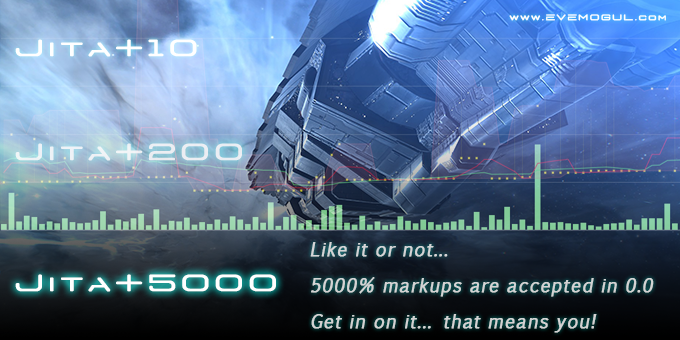 Jita+10 market regulation had always pissed me off.  Whether it was decreed by the alliance directors or an individual decided to list items super cheap for his own reasons, it always irked me.  To a trader it’s like throwing away isk, and a similar analogy is that of a ratter who has his corp put taxes up to 90% – it’s a huge amount of effort for little payoff.  I personally don’t mind paying inflated prices in null-sec and I always expect to, and for the most part I believe that most pilots are the same.  I see it as simply one of the prices for getting good pew. So when I saw a bunch of relatively cheap, low-end items up for sale at what was essentially Jita+10, all the way up in Branch, it spurred me into action to see what I could achieve.

The items I’d found in Branch were selling for a little over 100,000 isk and I bought them all, immediately relisting them for 5,000,000 isk. Again, they sold well at a handful a week for each particular item. For those of you who’re familiar with my teachings on trading in Eve you’ll know that my number ‘3’ rule or guideline of Inter-Regional Trading is that ‘distance equals premium’. The further away a system is from a main hub the higher prices and margins you can command. It’s expected, and it was being proven out extremely well as I was learning.

However there was one thing I wasn’t expecting, and in fact my null-sec noob status really shone through – and I suggest that every new 0.0 trader take heed. A few days after relisting these items I received mail from my own corp director and from the director of another corp who was blue to us… his mail essentially asking “why?”, and querying “you are blue to us right?”. I simply hadn’t realised the sensitivities of flipping market items to null-sec bros who were blue, I’d pissed a corp director off and rightfully so. It was ethically wrong, lesson learned. 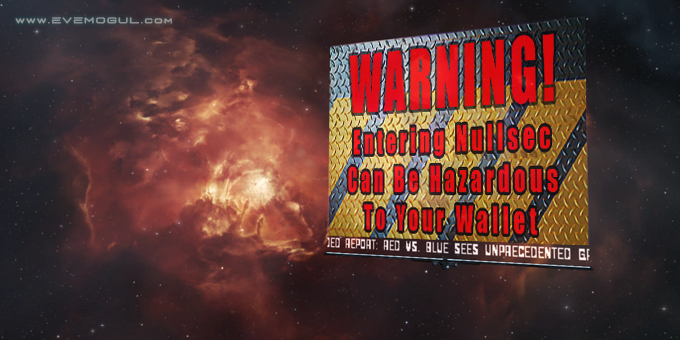 It’s obvious now, but at the time I just had no clue and I was still coming to terms with the depth of the game as it related to inter-personal relations between allies. It wasn’t requested of me but I refunded the purchases that had been made and threw in an extra few million on top for each buyer as a goodwill gesture, and then relisted the items at a more respectable price to keep everyone happy. Including me… and it wasn’t Jita+10 I can tell you that much.

For interest sake, the max I’ve been able to semi-regularly squeeze out of items is approximately Jita+600,000.  Yep, six hundred thousand percent markup on an item that cost me roughly fifteen to twenty thousand isk to obtain in highsec… and you’ll be happy to know, at least on a moral level, that the customers weren’t blue.

1)  If you’re going to trade in zero security space (and I suggest all of you do) don’t flip market items in allied null-sec stations – there’s often enough market opportunity to go around without needing to do it;

2)  Generally don’t screw your allies too hard on market items (try to ignore the fact that they’re not forced to buy your stuff and can undercut you if they wish); but having said that

3)  The majority of pilots will accept higher prices, so when trading in null-sec don’t short-change yourself either.