The creativity of the Eve Community is something that always stunned me. The sheer passion for this game oozes from pretty much every person who plays it. From internet radio channels, to podcasts, and news sites, and blogs (soo many blogs), artwork, youtube videos and fan made commercials, the list simply goes on and on and on. So much so I wish I could do some justice to the up-welling of creation that Eve Online inspires in its players. I am probably one of the least creative people I know, but Eve Online never fails to excite me into writing articles, paneling on podcasts and recording youtube videos. Eve as a game inspires creativity in its playerbase in vast quantities.

This redesigned Griffin taking it cues from the new Blackbird + variation model for example could have been a product of CCP themselves (click the image to be taken to Kwibl’s gallery to see more of his artwork) and from what I can understand from the images comments, CCP have indeed been in touch with this artist, so who knows, maybe their work will make it in game at some point! But its not only Eve that gets all the love, indeed no, this picture of an unmasked Caldari clone soldier from Dust 514 by artist Vitaly Bulgarov, is both amazing in its detail and harrowing in its overall nature. 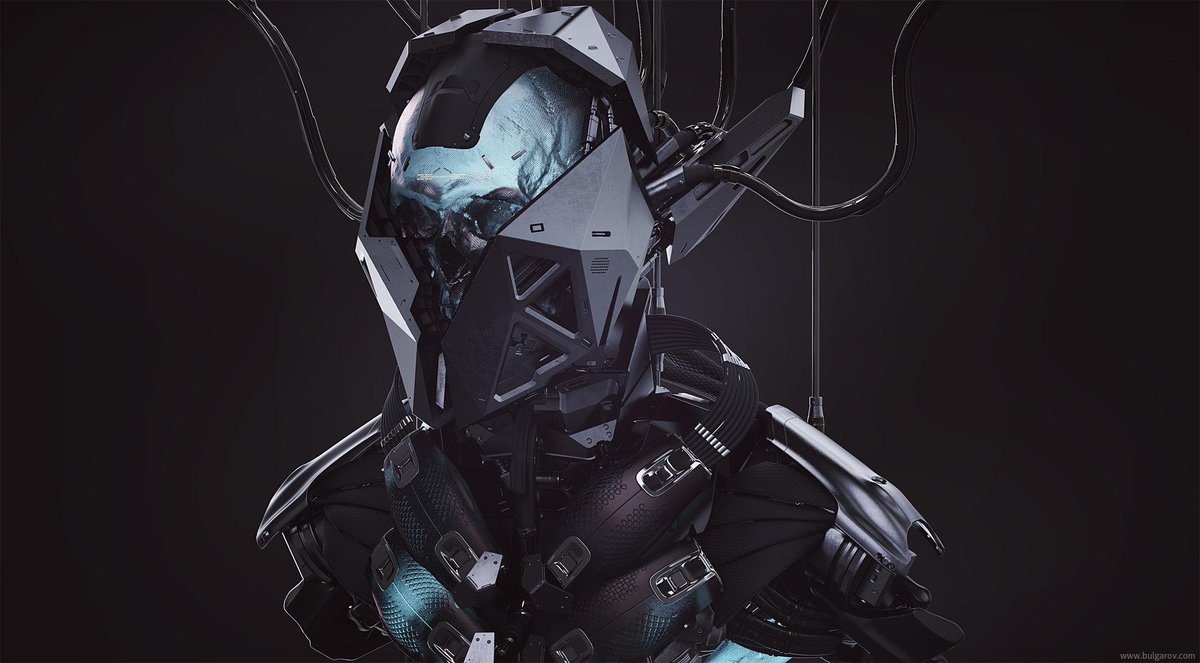 Perhaps one of the most controversial topics over the last year or two were in game organisations offering Eve related merchandise through private third party stores. Often these Eve Online organisations are burdened with massive running costs for communication software that would have to cope with potentially hundreds of people at any one time, websites, and other infrastructure of which could potentially spiral into the hundreds, or maybe even the thousands of Euros, Dollars, Pounds, Ruble, ect over the course of a year. It has therefore made sense to try and raise funds to keep their organisation going. 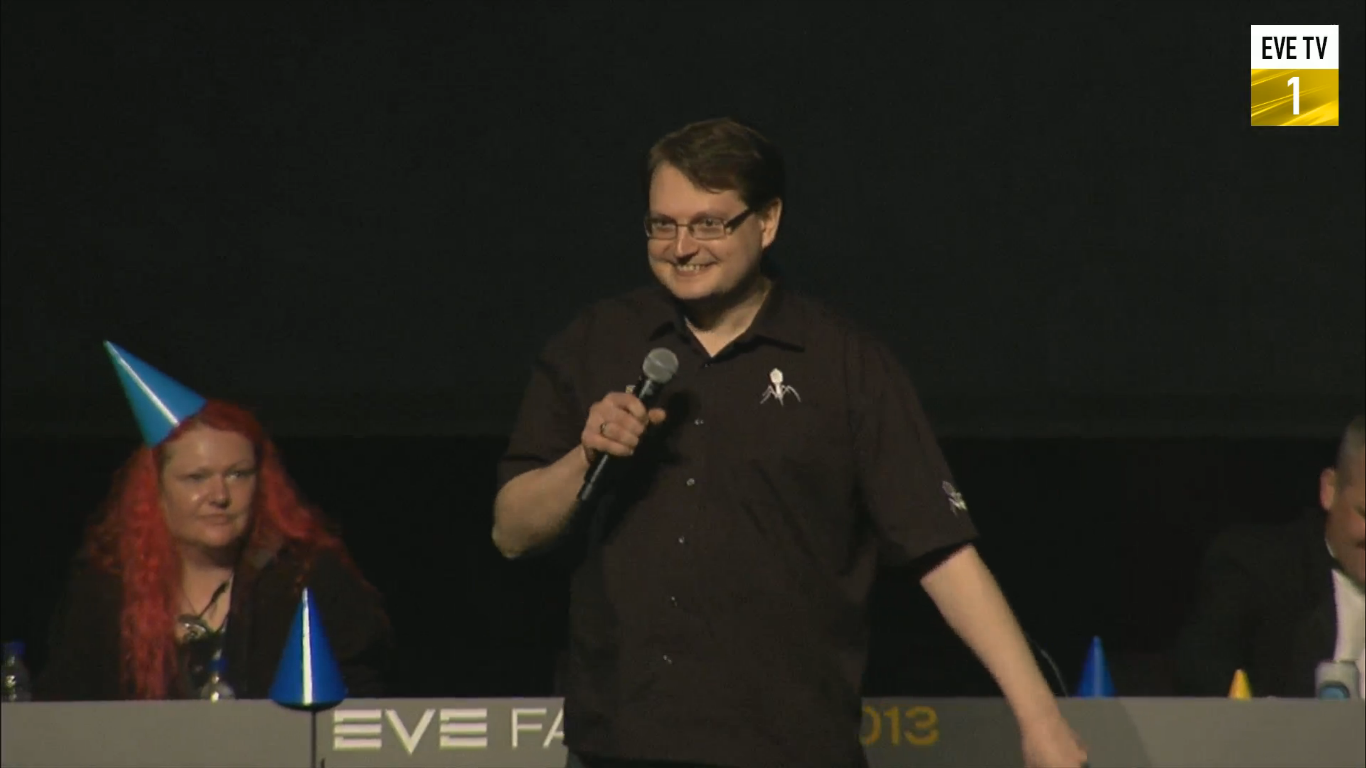 While there are a few different versions of this shirt about now over the years, when you go to fanfest they are immediately identifiable, it is an important part of their culture and identity and a huge part of the Alliances brand identity.

But, I can just imagine a number of legal copyright and intellectual property eagles people who may (or may not) be reading this article and are twitching with horror. ‘Does that infringe on our brand? How dare people profit from my companies intellectual property!’ and indeed, this appeared to be the stance at CCP a couple of years ago.

I personally had been following the work of Rixx Javix for a couple of years. His blogging website Eveoganda shows off not only his writing skill, but also his graphical skills. As a leader of the pirate alliance Stay Frosty and A Band Apart, he is no stranger to the costs of running an alliance and its brand promotion. He was also subject to CCP’s wrath in the case of his Alliance oriented store as he explains on his website, which was shut down within three days of it going live. I approached Rixx to get more history behind the events running up to this and the events over the next two years.

I started trying to get CCP’s attention a year before the store went live and I kept running into roadblocks, it was almost impossible to get anyone to pay attention. I had several proposals in the legal department, but (was) getting no reply. So eventually I decided to force the issue and put the store up live anyway, knowing full well what might happen. The point being that other people were selling things online who clearly did not have a license, I found dozens and dozens of examples, so yes, the CCP legal department shut me down. (But) They shut the ENTIRE thing down however, not just the copyrighted materials,but also stuff that I owned 100%. So that didn’t end well.

Sadly, the clashes between CCP and its player base on copyright and intellectual property ownership didn’t stop there. As the debate on what is acceptable for player groups to use in their merchandise and who ultimately owns the intellectual property spilled over into Alliance Logo’s with CCP ultimately having to pull the plug on logo submissions until the legalities of it all could be resolved.

This was also subject of a discussion on a podcast called Lost In Eve that I (Tiberius StarGazer) used to co-host on where I had raised the question as to why CCP seemed to be so bad at tapping into their customer base in regards to merchandising purposes.

From that point on, Rixx, recognising that CCP was missing an opportunity, took on the opportunity to press this.

I learned from that experience (that) this is a two way street. Well we have a lot of content creators in Eve, not just me certainly, and CCP needed to have a mechanism for dealing with that reality, which they didn’t, which was a waste really. I took it upon myself to think about this from a business perspective, what kinds of things could I create that they’d be interested in? How could I build momentum in the community? It was a personal challenge that I took upon myself as well.

And from that was spawned the Eve Art Print Series and Eve Signature Wallpapers, the Ferox below being the first of them. With over 150 individual designs its the library that is expanding all the time, the quality of the designs are clearly apparent and they very quickly were picked up by the Eve community. 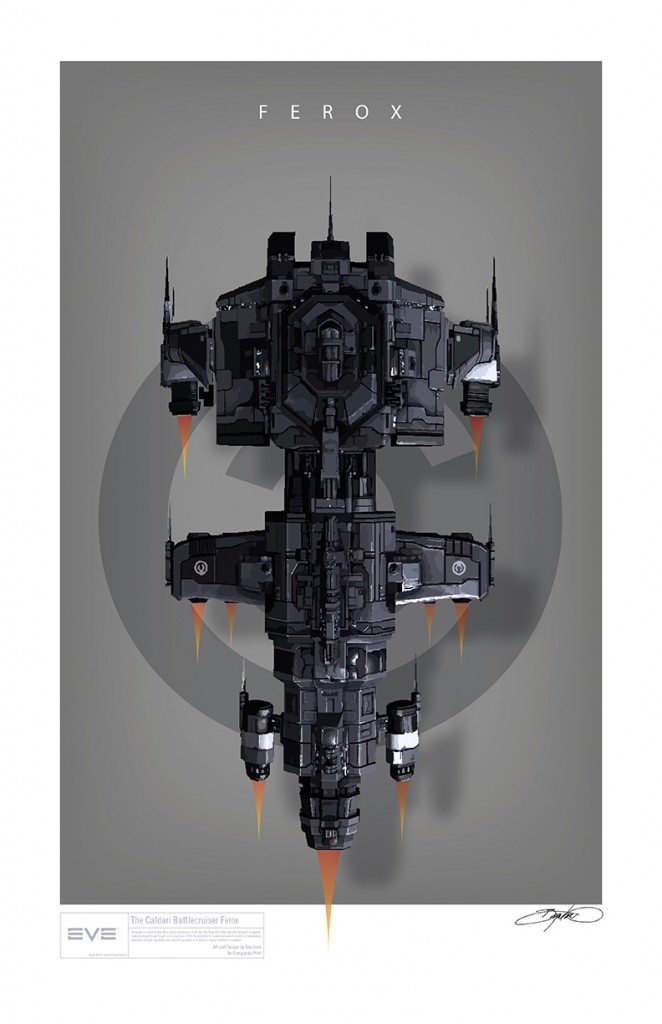 (The) response was incredible, the community really responded, I mean some of these posters got over 40,000 views! My intention from the beginning was to simply give anyone that asked a PDF they could just get printed I figured if CCP wasn’t going to work with me, then I’d just give stuff out for free.

But things had already been changing at CCP. Since CCP Seagull took over as executive producer there have been some fundamental changes within the culture of CCP. CCP has vastly increased its use of social media tools such as Twitter and Slack to communicate with the playerbase, who had also been taking up these forms of communication between themselves. This massively improved the communication CCP had with its player base, so it was only natural that someone noticed the artwork.

CCP Explorer was the first one and this was also the time when CCP Spitfire took over the Eve store, so the timing was very good. (So) we started talking about this back in October primarily with CCP Torfi and CCP Spirfire. Also, at this time, changes were being made inside of CCP legal (and) a real effort was under way to change the legal basis of how CCP could work with the community, all of which stemmed from CCP Seagull‘s leadership.

The end result of these discussions between Rixx and CCP resulted in the production of a set of four posters depicting the Hurricane, Harbinger, Drake and Myrmidon battlecruisers being made available to buy at the 2015 Fanfest. You can read CCP Falcons Dev Blog prior to the event. When asked how Rixx felt about seeing his work being at Fanfest his response was simple ‘Awesome’. Indeed, this is the first time that player art had been officially merchandised by CCP since 2006. With some 200 sets being sold at the event nearly 17% of everyone who attended took home a set of Rixx Javix posters. Rixx also hosted a presentation on fan art at fanfest. 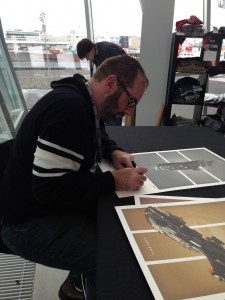 Rixx also had a pleasant surprise from another attendee at fanfest Norbert Bensel who had made a book of all his pictures. 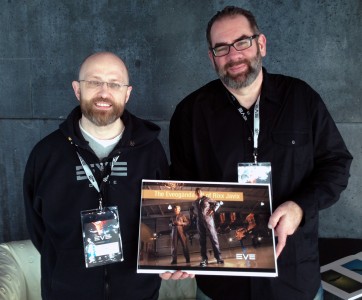 But, the story hasn’t ended there, yesterday, a Dev Blog was released by CCP Spitfire: 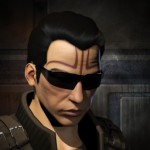 Last October, a pirate, scholar and gentleman by the name of Rixx Javix published a blog post on a series of art print posters featuring the major ships of EVE Online. The album that initially had a meager three ships – a Ferox, Slicer and Gnosis (of all things!) – now comprises well over a hundred designs.

Naturally, the most common question Rixx was asked was “How can we buy these?”

He reached out to CCP to see if we were open to some kind for collaboration; being long-time fans of his work, we obviously were. Besides, it has been almost 4 years since we sold any kind of EVE poster. Time to fleet up with him!

The natural place to start was EVE Fanfest. We selected four ships for the initial set, printed a limited amount of posters, and put them for sale in the Fanfest store. At the same time, Rixx hosted an ‘EVE Fan Art’ presentation to share some insights into the project (highly recommended!)

The results were great – as a matter of fact, the set was the second best-selling item in the store! Of course, many players did not attend Fanfest, so the next natural step was to make these art prints available online. Fortunately, we already had an established partnership with Quantum Mechanix, a Los Angeles-based creative developer of collectibles inspired by some of our most beloved shows and movies, including Battlestar Galactica, Doctor Who, Firefly and Star Trek. In other words, we knew we’d fit right in.

And so, without further ado, let me introduce the EVE Online Battlecruisers Art Print Set. It includes four 18”x24” art prints produced on 100-lb, satin-finish paper, featuring four iconic EVE ships: Drake, Harbinger, Hurricane and Myrmidon. It costs $34.95 US for a set of four posters and is available for delivery to most countries.

Over to Rixx Javix:

“I’ve always been fascinated by spaceships and the ships of EVE are uniquely powerful, complex and riveting from an artistic perspective. They are, in so many ways, the pure expression of ourselves within the game. They each have personalities and histories that are as individual as the people who fly them. That spirit is what I’ve tried to capture in these pieces.

For the first time in many years, this collaboration between CCP and Rixx may be the start of many more to tap into the huge pool of creativity there is in the Eve playerbase. I asked Rixx if he had any closing thoughts:

This has been a long journey but an important one, not only for me, but for all of us I believe. For the players and for CCP. Like most good journeys it doesn’t have a destination really, only places to visit along the way. I’m really looking forward to where we are going next, I really believe, we are only just getting started.