After killing a Nyx Super Carrier in the system of Hier approximately 72 hours prior the #REKKINGRUSKI crew add another titan kill to their ever increasing list. This relates to an Erebus Titan killed in the system of Marmeha from the Aridia region, just 4 jumps away from the location of the Nyx kill.

The Erebus was piloted by JS Saul from the R.U.S.H [R.USH] Corporation in the SOLAR FLEET [SOLAR] Alliance, who are one of the most well known Russian alliances for their stability even when faced with evictions and losses of entire regions. The group who killed them, LowSechnaya Sholupen [-LSH-], are another Russian alliance best known for their control over the Aridia region of New Eden.

3Better from [-LSH-] responded to my request for information with the following:

This guy was seen in Fanathor 3-4 weeks ago with an Erebus, Nyx and Rorqual which jumped in. We had been waiting for him that day in Jerhesh, but there was a Brave corporation living in the system at that time, so local was more than 10 people almost all the time, so he decided not to jump in this system. During next day’s downtime he moved his supers to Neda, simultaneously with the Rorqual jumping to Udianoor. We weren’t ready for this move, so he did that successfully. On the next day he suddenly logged on and entered Udianoor with the supers. The HICs were 3-4 jumps out waiting for another target, so we missed him again. One HIC entered his system, but it was already too late, because he had logged. His cyno must have seen a HIC on scan, which made him sure we were after him.

He used different cyno chars every time, so we couldn’t trace his cyno before he made his moves. At that point he went offline for several days. Then he logged on his cyno and made his way farther with the Rorq only, also logging in his supers for a couple mins before DT, presumably for capping up. Days passed and he wasn’t showing up. We always had a HIC in Udianoor on around downtime and eventually after titan name blinked green 3min before DT on the watchlist, Rad1st got a result, but supers jumped out to Marmeha. Our guys didn’t have ships there, so nothing happened. As soon as the server goes up Rad1st rushed to Marmeha while Maxacamatman logged on his supers. Rad1st came just in time as the supers were doing safe logoff and scanned down their spot. That was on thursday last week.

We have been forming dreads every day before downtime and having HICs on their spot since then. Today he did log on relatively early (6mins before dt) and we had moderate numbers and the supers turned out to be fully tanked, that is why the Nyx survived at 19% armor. 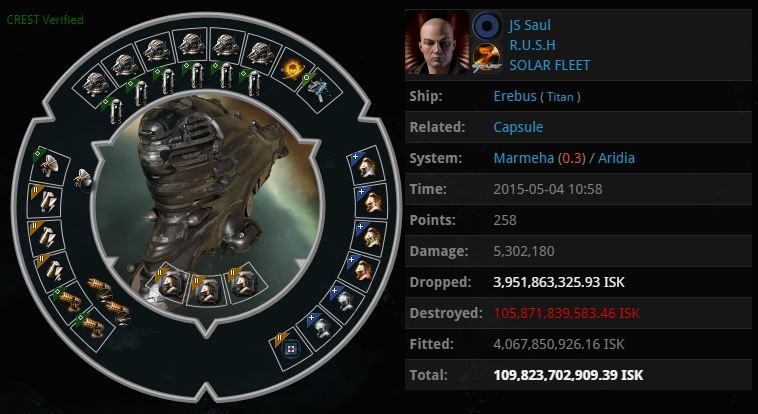 On the previous report relating to the Nyx kill, Bartolinjo a member of the Deep Exploration Projects and Programs [DEPP] from AXIOS. [AXIOS] Alliance, stated that they were hunting 2 Super Capitals who they had been following for a while. This could therefore relate to the above report from 3Better as they were clearly following it for a while and patiently hoping to catch the pilot as soon as the opportunity presented itself, which evidently did. However, thanks to the fortunate fitting of the ships it allowed one of them to escape but realistically it is unlikely to make it away if it attempts to login again.

The pilot obviously did his best to avoid capture by using multiple cyno alts, logging in around downtime and leaving large amounts of time between each login. However, due to the pilot still moving solo it was inevitable that it would eventually be captured. One thing which has yet been unanswered is the reason for the pilot to be in that region of space as it is a long distance from that of it’s alliance in the Eastern regions of New Eden, even though the pilot has been a member for a long period of time.

No reply has been received from the Erebus pilot at the time of writing, if one is forthcoming this post will be updated.